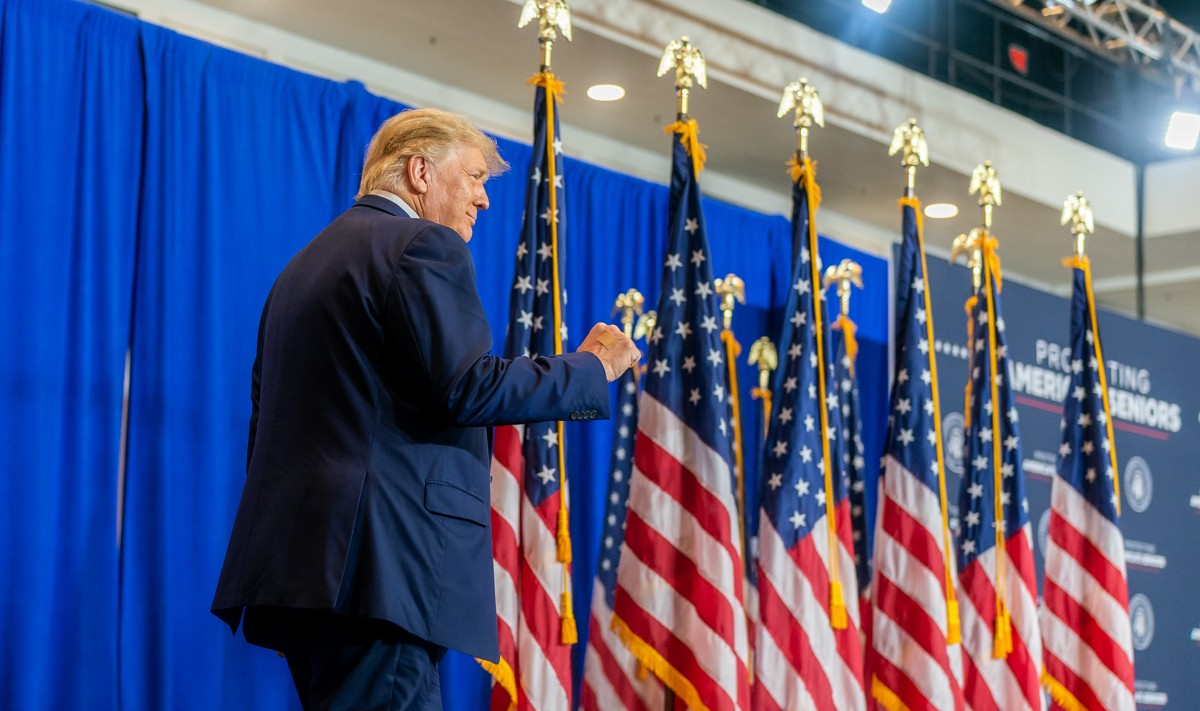 Like Shakespeare’s King Lear, Donald Trump is a “man more sinned against than sinning.” Trump’s enemies invariably exceed him in excesses. They accuse him of dictatorial behavior even as they seek to turn America into a left-wing authoritarian regime. The wags who dubbed their feverish hatred of him “Trump Derangement Syndrome” were right. The condition is altogether real, spurring everything from the bogus Russia investigation to the equally outlandish FBI raid on his home.

The FBI raid on Trump’s home amounts to a new insurance policy, one against a future presidency.

The condition is clearly incurable. It induced the infected in official Washington to try and cripple Trump before, during, and now after his presidency. The hopelessly politicized senior leaders at the FBI and the Justice Department have learned nothing from their utterly discredited investigation of Trump as a supposed Russian agent. That fiasco led to spying on Trump Tower (just as Trump claimed) and using an oafish “confidential informant” to infiltrate his campaign.

Former FBI head James Comey, after he got popped for these extreme measures, claimed disingenuously that he wasn’t investigating Trump directly but only his campaign and had an obligation to protect it from foreign influence. Of course, this was contradicted by the fact that he never gave Trump a briefing on his ostensible concerns. As it came out later in the texts of agent Peter Strzok, the FBI wanted to “stop” Trump and had an “insurance” policy in case he won. The Mueller probe that hobbled almost half of Trump’s presidency was the fulfillment of Strzok’s partisan crusade.

The FBI raid on Trump’s home amounts to a new insurance policy, one against a future presidency. It is yet another attempt by official Washington to delegitimize him lest he run again. The same reckless and warped mentality that drove Comey and company to entertain the most ludicrous collusion claims against Trump produced this grossly gratuitous raid.

Official Washington has long convinced itself that Trump is an inconceivable monster capable of anything. Hence, it could believe a surreal story about Trump hiring hookers to defile Barack Obama’s bed in Moscow. It could believe that Trump was in Putin’s employ. And it now believes that he is so dangerous he deserves fewer due process protections than a mobster.

From the start, the ruling class treated him like a foreign occupier of the country and would whip themselves up into a lather over his most prosaic exercises of presidential power. They now tell us in hushed tones that Trump’s alleged violation of the Presidential Records Act obligated the FBI to ransack his home. What a sick farce. This trivial matter probably could have been resolved with a single phone call from the FBI to Trump’s lawyers. But the ruling class feels no need to extend even the most minor courtesies to a former president because it sees Trump as irredeemably illegitimate.

Beneath this view lies not a respect for democracy, as the ruling class contends, but a contempt for it and the “deplorables” who compose much of the electorate. America’s elites are fanatically determined to deny the American people the democratic choice of electing Trump again. From John Brennan to James Comey to Merrick Garland, these elites behave not as dispassionate defenders of democracy but as partisan hacks no different from the crackpot intelligence operators who work in Third World one-party states. The FBI in particular has become largely an appendage of the Democratic Party, trafficking in propaganda and dirty tricks in service to the one-party state that President Joe Biden wants a “fundamentally” transformed America to become.

The FBI’s treatment of Trump is akin to what we see in the crudest autocracies, where the moment a politician loses power, he finds himself a hunted enemy of the state and must either fight to reclaim his office or suffer prison and death. Trump is like America’s banished Napoleon whom the ruling class would imprison on an island if they could get away with it.

If you strike at a king, you better kill him, the ancients said. But the ruling class, for all of its tyrannical ambitions, is too bumbling to finish Trump off. In the grip of Trump Derangement Syndrome, the elites always overreach, turning Trump into a populist martyr. The chaos his critics create is far greater than anything we saw during Trump’s presidency, which was mostly characterized by peace and prosperity, apart from the ginned-up scandals about him the media spread. It was forever telling us that Trump violated “norms,” while excusing all manner of abnormality in official Washington, starting with an “intelligence community” that falsely accused a manifestly patriotic president of collusion with Russia while shielding Democrats who actually disseminated its disinformation. In 2016, it bears repeating, the primary conduit for Russian lies was Hillary Clinton, who hired a foreign merchant of smears, Christopher Steele, to stuff them into a “dossier.”

In recent days, the chattering class has pooh-poohed the notion of an FBI raid on Trump’s home as evidence of America turning into a banana republic. But it is, almost cartoonishly so. From the FBI’s protection of the current president’s son to the unprecedented harassment of his chief political opponent, America under Biden looks as ramshackle as the left-wing dystopias of the past. What we’re witnessing is truly frightening and goes far beyond Trump, foreshadowing a brutal American future in which the ultimate crime is conservatism itself.