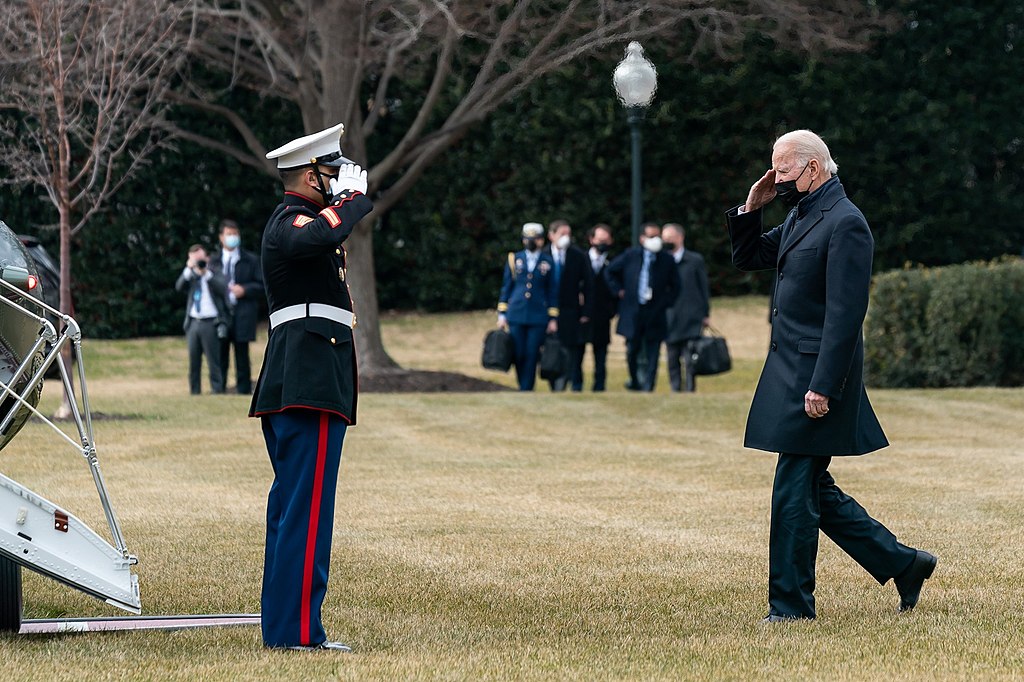 Some 400,000 Americans died from the COVID-19 virus before Donald Trump left office and at least another 315,000 have, so far, died since Joe Biden became president.

The COVID vaccines give a high level of protection against the virus. Even if you’re vaccinated, it’s still possible to get the disease but the chances of it being fatal are, we are told, greatly reduced. With or without the vaccine, between 97% and 99.75% of persons contracting it survive.

When facts were still important, in December 2020, about a month after he was elected, Joe Biden said that he didn’t believe that the COVID-19 vaccines should be mandatory for Americans when they became available. During the 2020 campaign, vice-presidential candidate Kamala Harris said that she wouldn’t trust a vaccine that came out before the election.

Several COVID-19 vaccines have been available since January thanks to Trump’s “Operation Warp Speed.” On September 9, Biden imposed vaccine mandates on our military, on the government’s civilian workforce, and on anyone working for a company with more than one hundred employees. In what was, for him, a very tough statement, he said, “We’ve been patient. But our patience is wearing thin, and your refusal has cost all of us.” He added that the unvaccinated minority “can cause a lot of damage, and they are.” But he never defined what that damage is.

The Biden vaccine mandate affects about one hundred million Americans and is causing a lot of confusion, as Biden’s policies usually do.

The news is filled with reports such as the one from Seattle which informs us that Washington Gov. Jay Inslee’s vax mandate on city and state employees will result, on or about October 18, in Seattle having to fire about forty percent of its cops.

Everyone who isn’t comatose knows about the Biden-created border crisis in which hundreds of thousands of illegal aliens are coming into the U.S. every month regardless of whether they carry the COVID-19 disease. What many people don’t know is that our Border Patrol officers are rejecting the Biden vax mandate in droves. How many of them are going to be fired this month for refusing the vaccine? And how many miles of border are going to be unguarded because they lost their jobs?

There are four classes of people who refuse the vaccine, some who fit into multiple categories. First are those whose religion prohibits taking it, a fact that’s hard to prove. Second are those who have a pre-existing medical condition that should prevent them from getting the shot. Third are those who worry that the vaccines are unproven and too risky to take. Fourth are those whose refuse any government order or only because Biden has mandated the shots.

Political objections to the vaccine aren’t valid. They are as faulty as Biden’s mandate.

Hundreds of thousands of U.S. troops reportedly remain unvaccinated despite being ordered to get the shot. I’m told that about 635 Navy SEALs — about twenty percent of the total SEAL force — are rejecting the vaccine on various grounds. The Navy has a particularly punitive approach to implementing Biden’s mandate.

I spoke to a young Navy officer — a line officer who isn’t a SEAL — last week. He has a pre-existing medical condition he believes should prevent him from getting the shot because it might trigger a relapse of unknown severity. He told me that the Navy has done two things.

First, the Navy is rejecting out of hand all applications to reject the shot on the basis of pre-existing medical conditions. He cited one of his pals who has had bad reactions to both annual flu shots and the anthrax shot. That guy’s request to reject the COVID jab was turned down.

Second, the Navy — like the other services — had a policy that a sailor who was going to leave the service within six months could avoid a vaccination. That policy was revoked with respect to the COVID vaccine.

Military members have had to get several shots — tetanus, anthrax and, when going to certain areas, anti-malaria, anti-Yellow fever and others — as part of the job. Orders to get those vaccinations are perfectly legal. Now, the order for the COVID shot is presumed legal.

So a Navy member who is ordered to get the COVID shot is liable for discipline — even imprisonment and dishonorable discharge — if he doesn’t and can’t get out in time to avoid it. I don’t know if the other services are taking that sort of punitive approach to the COVID shots, but it’s almost certain they do in today’s woke military.

I also spoke to the president of a defense contracting company last week. He has several thousand employees in three or four countries, many in the U.S. About thirty of his people in the U.S. are refusing the COVID shot. These are people producing equipment in direct support of our warriors. They all have to be fired over the next couple of weeks if they continue to reject the shot.

The effects of the Biden vax mandate can be summarized as follows.

For many private sector companies, they can either test their employees weekly or force them to be vaccinated.

For defense contractors, the only alternative to vaccination is to fire the unvaccinated employees.

For the military, there is no real choice: if your military obligation for service hasn’t ended — for officers and enlisted alike — you either get the vaccinations or you will be disciplined in accordance with the Uniform Code of Military Justice for violating a lawful order. That could mean non-judicial punishment, which would end any chance of promotion, to a summary court martial that could result in imprisonment and a dishonorable discharge. Any discharge other than an honorable one would limit their chance of future employment because it would terminate their ability to get top secret security clearances.

My family and I are all vaccinated. My wife and I even got our booster shots last week. I support being vaccinated, but my support for it doesn’t extend to disabling our law enforcement and military communities.

The incompetence of the Biden administration and its dedication to woke politics is demonstrated daily. The Afghanistan debacle, in which hundreds of U.S. civilians and thousands of Afghan allies were abandoned to the Taliban, is probably the worst example. Is it any wonder that military members, other government employees such as the Border Patrol, and employees of defense contractors don’t want to obey Biden’s vax mandate?

Biden’s vax mandate is primarily based on politics with some immunity science behind it. It should be modified or withdrawn, but it won’t be.

Shouldn’t there be a balance in the mandate based on science? If the recovery rate — nearly 100% — is any measure, there obviously should be. People who have had the disease have a natural immunity that should exempt them. People who have a pre-existing medical condition that could be exacerbated by the shot should be exempt as should people with well-founded religious objections.

Our national security cannot benefit from policies that would result in the discharge of about twenty percent of the SEAL force or anyone else in the military. It will be damaged as it will in the case of firing hundreds of Border Patrolmen, defense contractor employees, and many others.

But those changes — that sensible balance — don’t fit into Biden’s woke politics. It won’t happen.