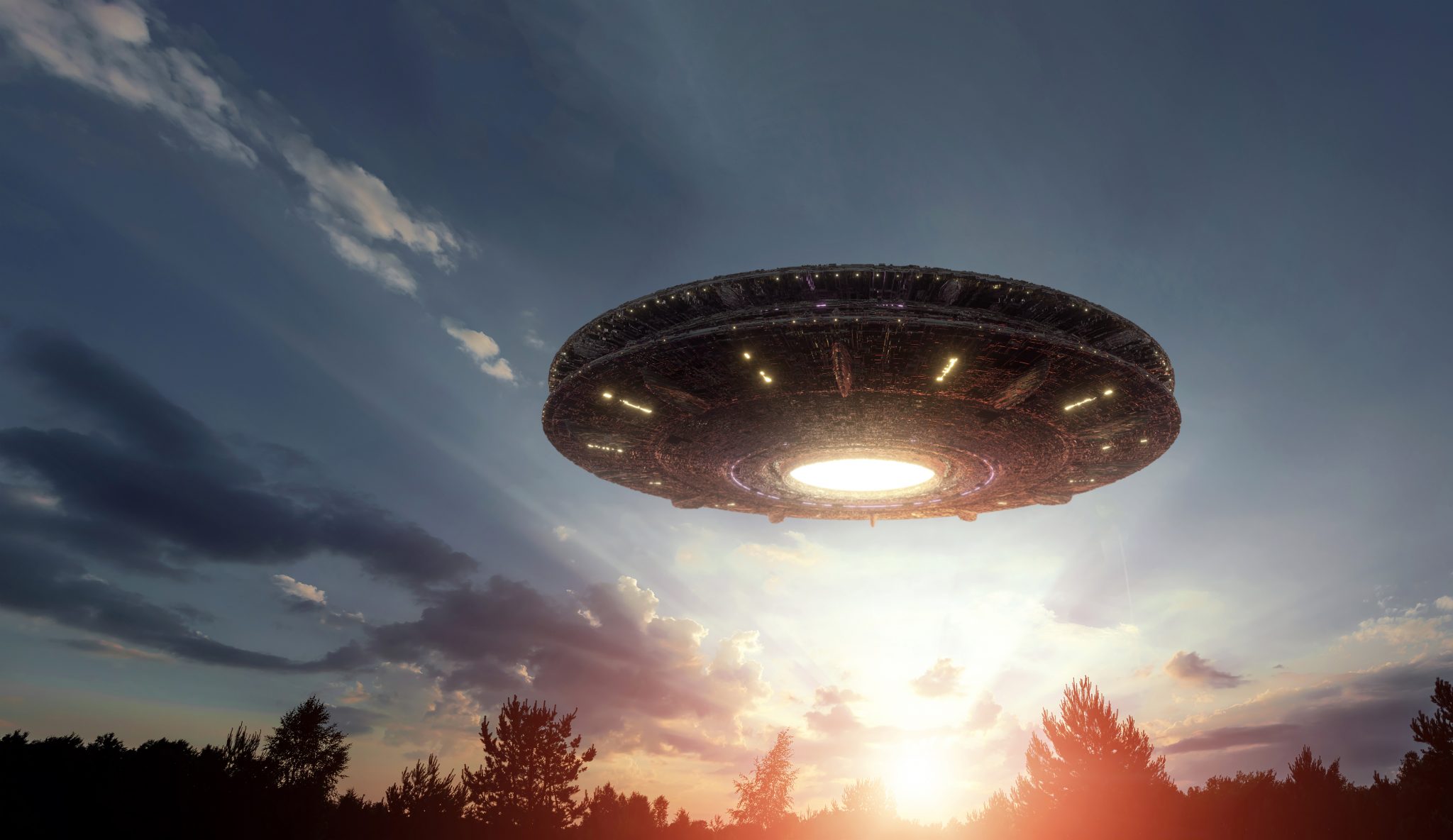 Admittedly, this column is a departure from the usual fare our readers encounter in this space, but it seems timely. After all, sometime this month the Pentagon is expected to deliver to Congress a report on what it’s now calling UAPs — unexplained aerial phenomena.

UAPs are the same thing as the UFOs we in the civilian world have been off-and-on obsessed with since the 1950s. Back then our government was engaged in a campaign to discredit any and all reports of such phenomena, and the veil thrown over those reports really hasn’t been lifted. The report due out this month, it is hoped, will begin that process and perhaps get us closer to the bottom of what is really happening in our skies.

Pop culture has already pre-judged the outcome, of course. According to Hollywood and others in the arts, they’re aliens — little gray men with big black eyes flying around in starships and making contact with us to instruct us how to mend our polluting ways. Or something.

This interpretation, fed through decades of suggestions in movies, TV shows, novels, and other cultural products, has paid off. In 1950, less than one in 10 Americans believed in the idea of life on other planets; today, more than six in 10 do.

It ought to be understood that this belief is, generally speaking, one that is arrived at wholly without evidence.

That isn’t to say unidentified flying objects don’t exist. Clearly, in rare cases, they do. There wouldn’t be anything for the Pentagon to put in that report if they didn’t. And we’ve all seen the footage released by the Navy of objects captured on cockpit cameras from fighter jets or from shipboard infrared cameras, which has covered news broadcasts in the last few weeks. Those images are of things that don’t conform to any of the laws of physics as we currently know them.

The Pentagon says those things aren’t ours. It’s hard to believe they’re Russian; after all, the Russians have very similar reports of the unexplained phenomena to ours. And China is enough of a latecomer on the military and technological scene to make it difficult to believe they’re the ones responsible.

Why, other than the influence of pop culture and the captivating imaginary tales our storytellers have spun for us, would you jump to such a conclusion?

Let’s remember the logistical and practical problems inherent in the visitation-by-extraterrestrial-intelligence argument. First of all, we’ve been broadcasting radio transmissions into space for decades now in hopes that if there is intelligent life out there, somebody would respond. Nobody has.

What that would suggest is if there is intelligent life out there with the capacity to utilize the radio spectrum, it’s awfully far away.

In 2015, researchers at the University of New South Wales identified Wolf 1061c, a planet that orbits a red dwarf star and is believed to be capable of sustaining life. It’s only 16 light years away from us. But there’s no life on that planet that we can see. Everything else we’d consider a candidate as a host planet for intelligent life would be hundreds or even thousands of light years away.

And there are massive problems with this theoretical ability we’re assured by pop culture will eventually exist wherein travel at the speed of light is possible. First of all, traveling that fast is almost assuredly going to bombard a spacecraft with levels of radiation so intense as to cook anyone inside it in minutes. Second, any such spacecraft can’t have hydrogen aboard, because it would essentially turn into a nuclear bomb at anything close to light speed.

And you can’t travel in a straight line from there to here. There will be lots of things in the way. The closer you get to the speed of light the more difficult it would be not to run into them. By the way, radar probably wouldn’t work too well in providing a collision warning if you’re traveling at the speed of light.

We’re conditioned to think somebody would just invent their way past these problems. But that’s Hollywood at work, not science.

Now — an alien civilization millions of years ahead of us in technology might very well have licked those problems. If that’s true, why they haven’t bothered to respond to our radio signals? And if they’re showing up in our atmosphere, why not give us a ring? What are these guys, the strong, silent types?

Lots of people studying this issue have, for these reasons, discounted the explanation pop culture is insisting on. Jacques Vallée, the French astrophysicist who served as the inspiration for the Gallic scientist character in Steven Spielberg’s Close Encounters of the Third Kind, has for example stated he doesn’t think these are extraterrestrials but rather “extra-dimensional” beings.

You could theorize, as some have, that perhaps these visitors aren’t from “where,” but rather from “when.”

But — and I’m not trying to decipher any of this here, because I’m no ufologist — what strikes me is how little attention is paid to the potential religious implications of these phenomena.

After all, in 1917 there was what’s commonly understood as a miracle near the Portuguese town of Fatima. There, a vision of the Virgin Mary appeared to three young children over the space of several months, offering them spiritual messages and cautioning against the rise of the Soviet Union and communism (the latter, somehow, never made it into the portrayal of the events in Fatima in a recent movie on the topic). The Virgin also imparted a warning to one of the children, who later became a nun, that a pope would be shot. I bring up Fatima because the final visitation of the children was accompanied by a brilliant and terrifying show of lights in the sky. From Joseph Bottum’s description in a column years ago:

Amidst all the enthusiasm and mass hysteria, the ecstatic stories of the sun breaking through the clouds and dancing across the sky, there are some surprisingly sober accounts mostly by reporters from anticlerical newspapers and skeptical academics who had come to watch the crowd. “The sun’s disc did not remain immobile. This was not the sparkling of a heavenly body, for it spun round on itself in a mad whirl,” wrote a professor from the University of Coimbra. “Then, suddenly, one heard a clamor, a cry of anguish breaking from all the people. The sun, whirling wildly, seemed to loosen itself from the firmament and advance threateningly upon the earth as if to crush us with its huge and fiery weight. The sensation during those moments was terrible.”

Does anyone have much doubt that were the events in Fatima to have taken place in 2017 rather than 1917, the common explanation would have been aliens rather than the Virgin Mary?

Consider Medjugorje as well. In that then-Yugoslav town in 1981, six children were similarly visited by a vision of the Virgin Mary, who imparted five religious messages — peace, faith, prayer, conversion, and fasting — to them over the course of many contacts. Since then, pilgrims have flocked to Medjugorje, and a very common report from them, complete with many photos, is the presence of strange lights in the sky.

Christian doctrine isn’t overly friendly to the idea of extraterrestrial life, and Christian researchers who have dived into the UFO pool — particularly with respect to the phenomenon of “alien abductions,” which is the central tenet of the extraterrestrial intelligence theory — have largely focused on demonic possession as the explanation for those.

Which, since we are far out on a limb in discussing these subjects, is hardly implausible, relatively speaking. There is a strong similarity between reports of those abductions and reports of demonic possession, after all. And if you think demonic possession is hokum, then why does the Catholic Church still employ exorcists?

The point here is to recognize the persuasive quality of pop culture, which has created the common public perception of extraterrestrial visitation to explain the unexplained and has generally achieved buy-in from the public based on practically zero real evidence.

We’ve all but given up on the idea that religion has much of anything to say about our lives. It’s hard to argue that we’re better off in the bargain. And now we’re about to settle on a faith-based explanation for those objects in the sky that Hollywood and a network of hucksters (if you want two hours of sheer moonbattery to fill your evening, go and stream Close Encounters of the Fifth Kind, a documentary that can be found on Amazon Prime, and you’ll see what kind of New Age claptrap is out there) have insisted upon.

But perhaps what’s really behind all this is far more spiritual than scientific. The last several years, in which the scientific community has brought us global warming hysteria and gain-of-function virology experiments leading to millions of deaths, should have taught us not to put all of our eggs in their basket.