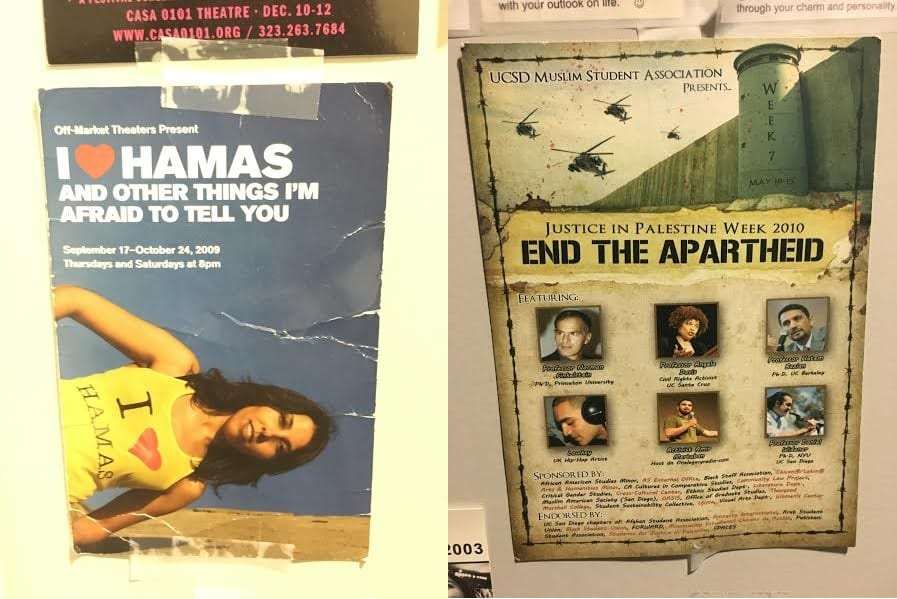 Trending
To Fully Comprehend Trump, an Insight Into the Jargon of NYC’s Outer Boroughs
by Dov Fischer
Mayor Pete: Red Diaper Baby
by Paul Kengor
Maybe the Coronavirus Will Teach Millennials the Dangers of Communism
by Melissa Mackenzie
Sign Up to receive Our Latest Updates!
Register
Hot Off
The Press
Special Report
Whither Roger Stone?
by George Parry
Political Hay
Brexit Britain Must Ally With America
by Stephen MacLean

Over the past decade, University of California schools have been making headlines — not for athletic or academic achievements, but for the anti-Semitism pervading campus life. Case in point: UC San Diego.

An African-American student would be justifiably offended, perhaps frightened by the spectacle of Ku Klux Klan or white supremacy posters hanging from a professor’s office — hypothetically. Likewise, Jewish students visiting the office of Professor Yen Le Espiritu would be offended and frightened. But for them, it isn’t hypothetical.

Espiritu’s office door is adorned with posters glorifying Hamas and accusing Israel of engaging in apartheid. These displays of hate and anti-Semitism hint at someone who should not be influencing impressionable minds. And this is before stepping into her classroom.

Espiritu is a distinguished fellow and former chair of the Ethnic Studies Department at UCSD. One of the courses she currently teaches, “Circulations of Difference: Introduction to Ethnic Studies,” has been described by one student who requested anonymity as a course that delegitimizes the very existence of Israel and the United States.

“Espiritu believes that Israel and the United States are colonialist nations. She is adamant that Jews have no connection to the land of Israel,” the student told the Haym Salomon Center, “despite the archaeological proof and the fact that Jews have resided in modern day Israel long before Islam even existed.”

Far from encouraging the free exchange of ideas and perspectives, Espiritu’s classroom environment is intimidating.

“She is so adamant about her own views that students fear voicing a different opinion,” explained her student. “If you support Israel or show patriotism for the United States, expect to be lambasted by her. These are perspectives she would never tolerate.”

Espiritu proudly introduces Quintanillato her class, describing her as “really wonderful” and highlighting her work as a “community activist, organizing in the San Diego area for over a decade with other anti-colonial and anti-capitalist collectives.”

Quintanilla’s presentation is an anti-America screed right from the start. The United States is demonized as existing on “occupied land.” UCSD itself is delegitimized for existing on “occupied indigenous lands.” Quintanilla challenges the class to consider whether this settler colonial process (building and growth of the United States) can be “undone.”

No Progressive rant would be complete without blaming all the world’s ills on white Europeans and capitalism:

The processes of settler colonial violence happens this way. We have to think about the removal of indigenous populations in order for the new settler population to reproduce itself on this new land and this why we have the United States. We have European settlers who came, colonized, killed, raped, and displaced indigenous people. Right? This is why we are here.

So we think about settler colonialism as a structure, but we also have to think about its complex architecture. So, it’s not just the border that makes the United States a delineated country. The border works in more complex ways. Yes, it’s an invisible wall, but it’s also heavily militarized, weaponized to perpetuate violence that is also in complex relationship to the prison-industrial complex. So the prisons, the military and the border [impact] migration which targets specific communities, those most vulnerable to capitalism, colonialism, imperialism and all systems of oppression.

But when the show’s opening act is contempt for America, you can count on hatred for Israel to be the featured program.

Quintanilla introduces her animosity for the Jewish State in dramatic fashion. She puts up a map of Israel and asks, “Does anybody know where this is?” A student answers, “Israel” and Quintanilla exclaims, “No! You are breaking my heart.”

All of her indictments against the United States, she now redirects toward Israel.

On a positive note, the students appear apathetic to her performance. She presents Israel’s 70thanniversary from the Arab perspective, referring to it as the “Nakba.” Trying to elicit a definition from the class, Quintanilla gets frustrated that “nobody Googled this.” One student answers, “the disaster, the catastrophe.”

“So, we have 1948 in Palestine and the settler process and removal of indigenous Palestinian peoples for a Jewish homeland that was created in a settler colonial way,” explains Quintanilla.

While admitting that Jews in the diaspora have experienced anti-Semitism, she adds that they “decided to create a homeland named ‘Israel’ in the indigenous land of Palestine. In order to do that, indigenous Palestinians needed to be displaced, removed, killed.”

Quintanilla’s diatribe is bereft of any facts concerning the Jewish presence in the land as well as any acknowledgment of the Arab nations’ preference for violence and bloodshed over living side by side in peace. She indoctrinates the class with the claim that there are “7.1 million Palestinian refugees,” conveniently failing to mention that in 1948 that number was 700,000 and that 850,000 Jews were exiled from Arab lands at the time, most coming from communities that existed long before Islam was even a thought.

Quintanilla continues, combining her disdain for both the United States and the Jewish State:

So, when we think about the relationship between what we call Israel and what we call the US, we see a similar — not completely the same, but a similar strategy of genocide and indigenous removal from indigenous lands.

What is taking place at UCSD should surprise nobody. Disdain for America has been part of liberal higher-learning since before the Vietnam War. But the tolerating of unfounded accusations and even hatred of a people have become commonplace.

UCSD is the campus where a Muslim student attending a speech by Horowitz Freedom Center founder David Horowitz announced that she wished all Jews would gather in Israel, so they’d be easier to kill.

A report from the Anti-Defamation League released in January documents a 41 percent rise in anti-Semitism in San Diego, with campus anti-Semitism at UCSD among the most affected.

According to Tammi Rossman-Benjamin, director of the anti-Semitism watchdog group AMCHA Initiative:

Our research indicates an increasing and frightening trend that some entire college and university departments or programs are becoming politically corrupted, controlled by, and dedicated to anti-Zionist and anti-Israel beliefs. This is true of the UC San Diego Ethnic Studies Department where the chair of the department and nearly 60 percent of the tenured faculty support boycotts against Israel, and this trend poses a direct threat to Jewish students.

Studies indicates that anti-Zionist faculty are the second biggest predictor of anti-Semitism on a given campus. Schools with one or more faculty who have publicly endorsed a boycott of Israel are five to six times more likely to play host to acts of aggression against Jewish students; and the more faculty boycotters, the greater the likelihood of such anti-Semitic acts. Professors must be stopped from using their influential positions as educators to promote personal and hateful political views. This not only has a corrosive effect on education, it incites hate and fuels anti-Semitism on campus.