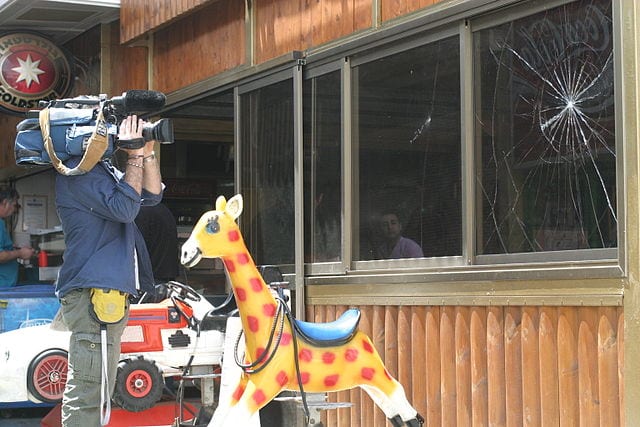 More Politics
Sign Up to receive Our Latest Updates!
Register
Hot Off
The Press
Daily Folios and Consecutive Sentences
This Too Shall Pass
by Dov Fischer
Another Perspective
I Stand With Trump
by Jeffrey Lord
Letters to the Editor
Letters to the Editor: Leftists, Losers, and Loyalty
by The Editors
Blog
Recipes From Our Readers: Winter White Bean Soup
by The Editors
Education Gone Wild
How the CCP Infiltrates American Universities
by Steve Postal

After the latest violence in Gaza, it is clear that the United Nations Relief and Works Agency’s continuous support of Palestinian terrorism is a major cause of instability in the Middle East and should be defunded.

According to newly released footage inside Gaza, Palestinian children in UNRWA schools are being encouraged to take part in deadly riots at the Israeli border. Palestinian school children recounted being taught that they have the right to attack Israeli civilians by all means necessary, including “weapons, stabbing and car ramming.”

This revelation is the latest in a disturbing trend of cooperation between UNRWA and the terror group Hamas. In June 2017, UNRWA announced the discovery of a terror tunnel under two of its schools in Gaza. During Operation Protective Edge in 2014, Hamas weapons were found inside UNRWA’s schools as often as three times in a single week.

Occasionally, UNRWA actually returned discovered weapons to Hamas terrorists that would later be used to attack Israelis. Hamas has fired rockets against Israelis from UNRWA schools, parking lots, hospitals, and residential areas, all the while using Palestinian civilians as human shields.

UNRWA teachers and staff work to instill a culture of hatred among Palestinian children. According to UN Watch, more than 40 Facebook pages operated by UNRWA schoolteachers, principals and other employees incited children to commit acts of terrorism or anti-Semitism in 2017.

One such individual, Ghanem Naim Ghoneim, a self-identified UNRWA teacher, posted two photos of Adolf Hitler on his Facebook page, with captions reading “Hitler the Great” and “God bless Hitler.”

Anti-Jewish incitement by UNRWA can also be found in their educational materials. In a recent study published by the Center for Near East Policy Research, over two million graduates have been indoctrinated to hate Jews and seek Israel’s annihilation. Because of UNRWA’s relatively large share of Palestinian educational activity, its actions contribute directly to the perpetuation of the Israel-Palestinian conflict.

In over 200 approved textbooks on subjects ranging from civics to mathematics, Palestinian children are being taught to kill Israelis and sacrifice themselves as martyrs to commit genocide against Israeli Jews. This curriculum for death has been found in over 400 UNRWA schools throughout Palestinian-controlled territories.

Rather than provide Palestinian children with a proper education and the tools to make better lives for themselves, UNRWA instead chooses to help fuel a six-decades-long conflict that pits Palestinians against Israel.

To end this ongoing cycle of violence, every civilized nation must cease allocating billions of dollars to UNRWA. For over six decades, the U.S was the largest bilateral donor to UNRWA and has long been “one of the Agency’s most reliable supporters” according to UNRWA’s official website. While the U.S has cut around one-third of its annual contributions for 2018, European countries such as Belgium and the Netherlands have vowed to supplement this loss in funding.

The time has come to put an end to this dysfunctional UN agency. It is unacceptable that American taxpayer dollars are being used to foment violence and promote a culture of despair among Palestinian children in Gaza. Without major reforms, this UN agency should be defunded and disbanded immediately for the sake of peace.

Bradley Martin is a Senior Fellow with the news and public policy group Haym Salomon Center and Deputy Editor for the Canadian Institute for Jewish Research.