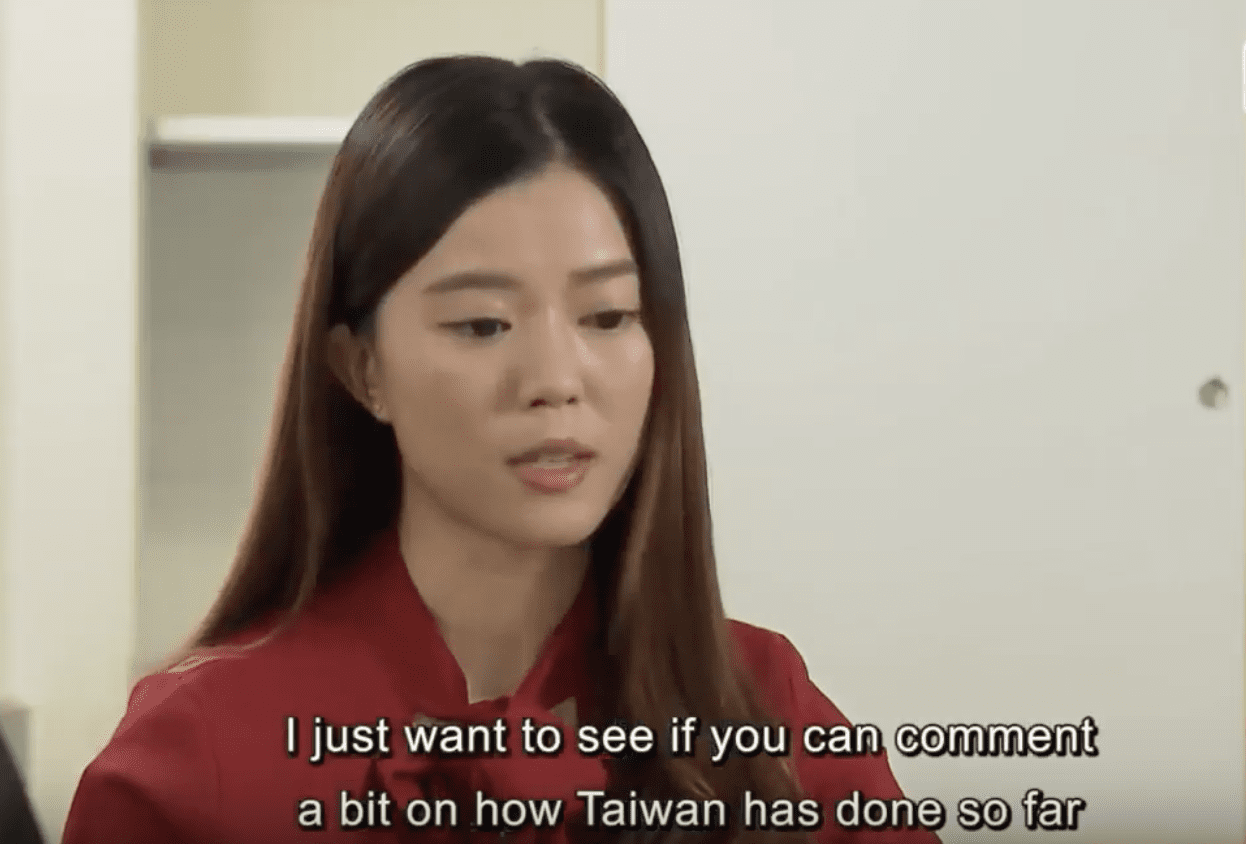 In the wake of the coronavirus pandemic, in the past two weeks the U.S. has been ramping up efforts to promote Taiwan’s inclusion into the World Health Organization (WHO) and other international bodies. Despite not being a world power and having inferior access to international organizations, labor, and resources, U.S. ally the Republic of China (Taiwan) is waging a much more effective fight against coronavirus than its nemesis, the People’s Republic of China (China). China is currently reporting over 83,000 cases of coronavirus, with over 3,300 deaths. As China has a population about 60 times larger than that of Taiwan, one would expect Taiwan to have approximately 1,400 cases and about 55 deaths. Instead, as of this writing Taiwan is remarkably only facing about 370 cases and five deaths. Given recent U.S. intelligence reports that China has underrepresented its cases in the past, the extent to which Taiwan is besting China is likely more significant. But how can this be?

By “prioritizing the containment of information, rather than the virus itself,” China lost valuable time in stemming the tide of what would become a worldwide pandemic. In fact, one report claimed that China could have avoided 95 percent of its cases if it had begun acting against the virus three weeks earlier than it did. Three ways in which China falters and Taiwan excels in its containment of coronavirus are in the two countries’ respective treatment of 1) their own first responders and experts, 2) the WHO, and 3) other countries.

China Suppresses Its Experts, While Taiwan Puts Them To Work

China used its government officials to intimidate doctors and others who raised concerns about the threat of the coronavirus. After Wuhan doctor Li Wenliang and Wuhan Central Hospital director Ai Fen posted information on WeChat on December 30 about the newly discovered virus, China responded by reprimanding both of them. Li Wenliang was forced to sign a letter stating that he lied about the virus. (Li Wenliang died from coronavirus in early February, and China recently declared him a “martyr” in a hollow gesture.) In early January, a local Wuhan communist official ordered labs to stop testing and destroy samples. In a bizarre about-face almost three weeks later, China issued a directive that stated, “[A]nyone who deliberately delays and hides the reporting of [coronavirus] cases out of his or her own self-interest will be nailed on the pillar of shame for eternity.”

But even after this statement, China continued to prevent the facts from coming to light. In mid-February, the Wuhan Institute of Virology officially denied the identity of a person who many believe is “patient zero,” one of its researchers named Huang Yanling. The Institute also appears to have recently scrubbed information about her from its website. Huang Yanling is presumed missing, with many believing she died from the virus and was cremated. This stonewalling of facts targeted not just the scientific community but also dissidents. A Chinese property tycoon recently went missing after publicly criticizing Xi Jinping for his response to the coronavirus.

Taiwan, in contrast, quickly deployed its doctors, scientists, and government officials to combat the spread of the coronavirus. In early December, Taiwan’s health officials were checking passengers from flights from Wuhan for symptoms. Taiwan required its hospitals to test and report cases shortly after its fact-finding mission to China on January 12. On January 20, Taiwan’s CDC also relaunched its Central Epidemic Command Center, which Taiwan previously established following the SARS outbreak in 2003. This launch in turn allowed enabled Taiwan to execute a list of 124 public policies to fight the coronavirus.

In contrast to China, Taiwan’s government officials are transparent, competent, and widely respected. Nicknamed the “Iron Minister,” Health Minister Chen Shih-chung brings a “sincere attitude and transparent approach” to matter-of-fact daily briefings on the coronavirus pandemic, and a current poll put his popularity at 91 percent. The current vice president, Chen Chien-jen, also provides policy expertise. An epidemiologist by training, Chen Chien-jen is praised in Taiwan as successfully containing SARS in 2003 in his previous role as health minister.

China Stonewalled the WHO, While Taiwan Tried in Vain to Get Its Attention

China further delayed what could have been an effective response to the coronavirus by refusing outside assistance. China only notified the WHO of the coronavirus on December 31, approximately three weeks after Chinese doctors discovered cases. China finally agreed to allow WHO experts into the country on February 2. Not only did China delay working with the WHO, but it also outright refused an offer of cooperation from the U.S. Centers for Disease Control and Prevention (CDC). Rather than criticize China, the WHO praised it in January and February.

Ironically, it was Taiwan, not a member of the WHO due to pressure from China, that tried in vain to give the WHO timely and valuable information on the coronavirus. Taiwan asked the WHO questions and provided it with warnings about human-to-human transmission in December, but the WHO ignored both. More absurdly, WHO tweeted on January 14 that “Chinese authorities have found no clear evidence of human-to-human transmission.” In fact, China publicly acknowledged human-to-human transmission of the virus only on January 20, three weeks following Taiwan’s warning to the WHO. Taiwan was upfront in sharing its coronavirus cases and methods of prevention with the WHO, but the WHO responded by not sharing Taiwan’s information with members.

Despite all of Taiwan’s efforts to do right by the WHO, the WHO continues to deny the country’s existence. In late March, Hong Kong journalist Yvonne Tong asked WHO Assistant Director-General Bruce Aylward if the WHO would consider Taiwan membership. In a clip that has now gone viral, Aylward responded by pretending not to hear the question, then asking Tong to move on. When Tong again asked about Taiwan, Aylward appeared to hang up on Tong. When Tong called back and again pressed Aylward on Taiwan, he responded by stating, “Well, we have already talked about China, and you know, when you look across all the different areas of China, they’ve actually all done quite a good job,” (my emphasis) and then abruptly concluding the interview. Following the interview, Aylward was mysteriously scrubbed from the WHO’s website. So it looks like the WHO will continue to parrot China’s position that Taiwan is not a sovereign nation and exclude Taiwan, even if doing so is so obviously counterproductive to world health.

China is doing little to build trust with other countries dealing with the pandemic and instead is opting for deception and belligerence. China is spreading a disinformation campaign against the United States, claiming that the coronavirus was created in a lab by the United States military. China has also claimed that the virus started in Italy. Rather than provide the United States with reliable information, China has expelled several American journalists from the country.

Perhaps most egregious is China’s “mask diplomacy.” China has sent Europe defective facemasks and test kits. In light of these developments, New York authorities should view the Chinese ventilators recently donated to the city with great suspicion. Additionally, China is reportedly willing to give France one billion face masks, but only if it purchases 5G equipment from Huawei. Huawei itself had donated 800,000 masks to the Netherlands, while Netherlands is still debating whether or not to adopt Huawei’s 5G equipment. China’s masks to Italy, Spain, the Czech Republic, and Greece have been panned as cheap PR stunts to divide the European Union and to increase European dependency on China. Interestingly, Europe paid for most of the supplies from China; China did not donate them.

Taiwan’s “mask diplomacy” appears far less problematic. Taiwan has pledged to send 10 million masks to countries most in need, including two million to the Untied States. These are donations. Taiwan has also pledged to work with the United States on prevention efforts as well as vaccine development. Taiwan has also donated food and supplies to the Vatican.

Looking Ahead to A Stronger U.S.–Taiwan Partnership

In 1971, the United Nations voted to expel Taiwan and recognize China in its place as “the only legitimate representative of China to the United Nations.” The United States was complicit in Taiwan’s isolation: President Nixon met with Mao in 1972, and President Carter declared People’s Republic of China as the sole legitimate Chinese government in 1979. But from its imposed pariah status, and with limited resources, Taiwan has so far managed to effectively battle coronavirus better than most, including China. Taiwan’s effective battle against the coronavirus will have downstream benefits to the United States.

The current U.S. administration has been extremely pro-Taiwan, arguably more so than its predecessors. This administration sold F-16s to Taiwan, the first such sale since 1992. President Trump became the first president to speak directly with Taiwan since 1979, and he has questioned the “One-China Policy.” This administration should continue to promote policies that are mutually beneficial to both countries, potentially using the recently enacted TAIPEI Act as a catalyst. This administration should also continue to support Taiwan’s inclusion in the WHO and other world bodies, establish a full U.S. embassy in Taipei, increase bilateral trade, sign a U.S.–Taiwan free trade agreement, and boost defense contracts with the country.