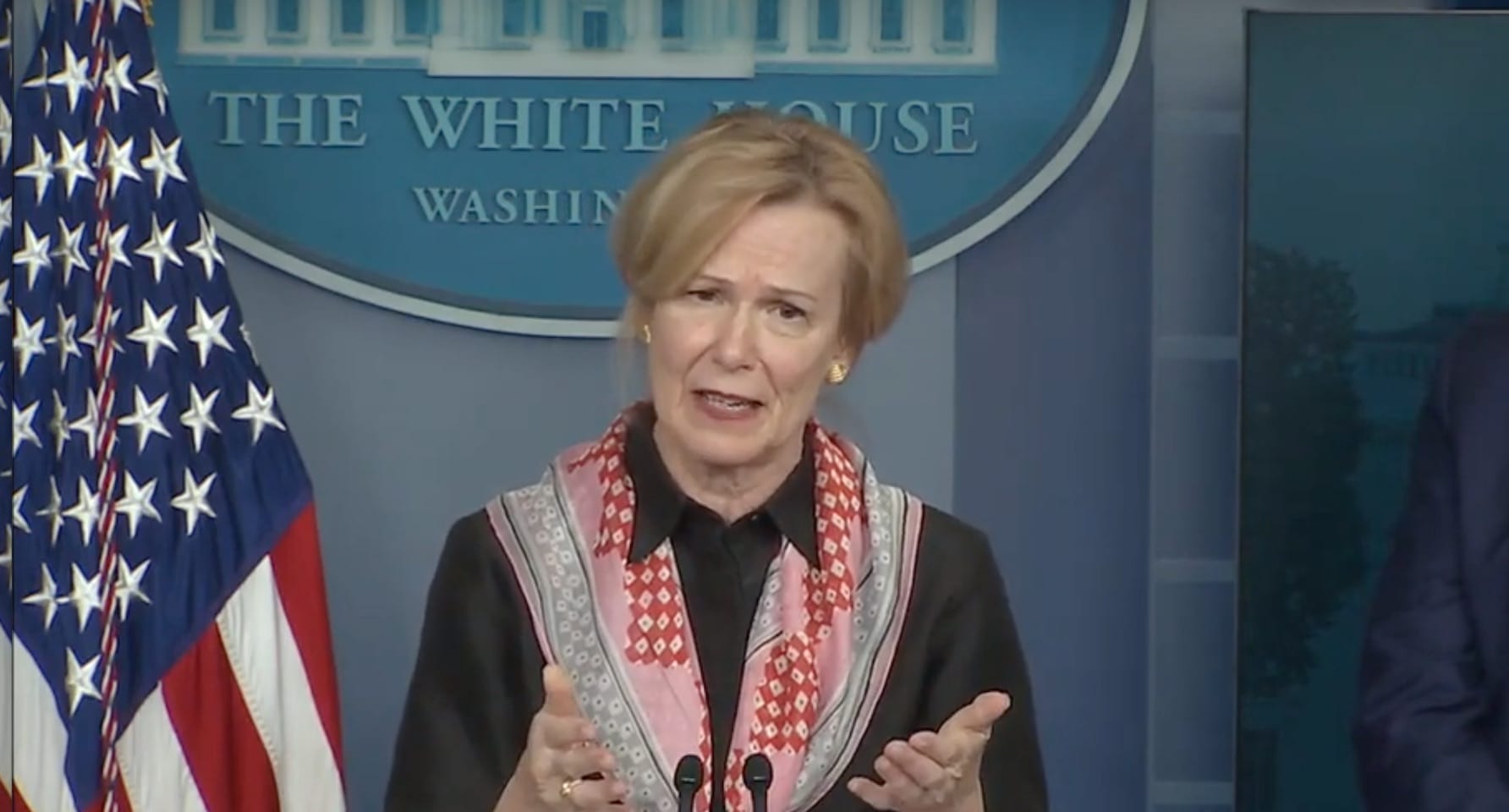 Turn on your TV, and cable news will show you a chyron with the cumulative total of known COVID-19 cases in the United States. That number increases daily, by a simple process of addition, but that’s not the number that matters most in terms of coping with the pandemic. What matters, from the perspective of avoiding a crisis that overwhelms our health-care system, is not how many people are infected with the coronavirus, but rather the number of patients hospitalized. As tests for the Chinese virus have become more widely available, a majority of people who test positive — more than 80 percent in some states — are never hospitalized. Earlier projections of a system-crashing crisis have so far been proven false, but the media refuse to acknowledge the failure of the doomsday prophets and their computer-generated pandemic models.

It feels unfair to point this out, at a time when health-care workers in the hardest-hit areas of the country like New York, Detroit, and New Orleans are struggling to keep up with a surging number of COVID-19 cases, and the daily death toll continues increasing. More than 1,300 Americans died from the virus Saturday, concluding a week in which U.S. deaths totaled 6,232. Next week’s coronavirus death toll will almost certainly be much larger; the progression of the disease takes time, and patients who die typically were infected two or three weeks earlier. But at least 95 percent of those infected survive — in some states, the death rate is less than 2 percent — and most people with the virus never require hospitalization.

Dr. Scott Gottlieb of the American Enterprise Institute last week produced a chart of coronavirus statistics from Florida, showing three lines: reported cases, hospitalizations, and deaths. The case number line curved sharply upward, but the lines depicting the numbers of hospitalizations and deaths were on much lower trajectories. Why? Since March 25, Florida conducted more than 6,000 coronavirus tests daily; more than 65,000 people were tested in Florida during a single week, March 28 to April 3. More testing means more cases are identified, Q.E.D. But of those who tested positive (about 12 percent), very few were hospitalized. As of Sunday, Florida had reported 11,545 cases of COVID-19, but only 1,490 were hospitalized with the disease (12.3 percent) and there were 218 reported deaths — a death rate of 1.8 percent.

This is good news, especially in comparison to the doomsday projections that were widely circulated after the Wuhan virus emerged as a global pandemic. We cannot presume to know what will happen in the future, but so far, America’s coronavirus outbreak has been less deadly than in Italy, where the reported fatality rate has exceeded 12 percent. Even the states with higher fatality rates, including Washington state, Michigan, and Louisiana, are about 70 percent below the reported death rates in Italy. And even as case numbers nationally keep rising — past 330,000 Sunday, with more than 30,000 new cases reported — these numbers are lagging behind projections issued in late March by the Institute for Health Metrics and Evaluation (IHME) at the University of Washington’s School of Medicine. The title of that March 26 report, “Forecasting COVID-19 impact on hospital bed-days, ICU-days, ventilator days and deaths by US state in the next 4 months,” explains the study’s purpose. The report predicted “that 41 states will need more ICU beds than they currently have available and that 11 states may need to increase their ICU beds by 50% or more to meet patient needs,” according to an IMHE press release.

The so-called “Murray model,” named for the IHME’s director Dr. Christopher Murray, made headlines after a March 29 White House briefing, at which President Trump announced he would extend federal “social distancing” guidelines through April 30. The president’s coronavirus task force coordinator Dr. Deborah Birx cited Murray’s projection of “between 80,000 and 160,000” deaths from the pandemic. Birx made the point that the IHME projection assumed that current “mitigation” strategies — stay-at-home orders, etc. — would continue for many more weeks. The Murray model was the basis for local news headlines like “New models predict Texas COVID-19 deaths could reach over 4,000” (KEYE-TV, Austin) and “Coronavirus: Deaths in Florida projected to hit 6,766 by August” (Florida Times-Union). Within days, however, observers pointed out that actual case numbers were not confirming the IHME projections.

On April 2, Justin Hart published on Twitter a series of charts comparing the Murray model forecasts of coronavirus hospitalizations for April 1 to the actual numbers reported by states. (Only 41 states at the time were publicly reporting their hospitalization numbers.) The gap between the forecast and the reality was startling. Whereas the Murray model had predicted more than 100,000 hospitalizations by April 1, the states reported only about 30,000. State-by-state comparisons yielded similar gaps: New York had only 18,000 COVID-19 patients hospitalized on April 1, compared to more than 50,000 projected for that date by the Murray model. In some states, the gap was much larger: for example, 2,500-plus projected versus about 500 actually hospitalized in Colorado. If these projections were missing the mark so badly less than a week after they were issued, how could anyone trust IHME model forecasts of what the patient load would be in mid-April or later?

This is a very important question because, for example, when you turn on the TV and see New York Gov. Andrew Cuomo warning of a shortage of ICU beds and ventilators to treat coronavirus patients, he is speaking of an anticipated future shortage, based upon the predicted trajectory of the outbreak. Cuomo is concerned about whether or not his state’s hospitals will have the necessary resources to cope with the patient load at what he calls the “apex” of the “curve.” According to the Murray model’s late-March forecast, as many as 75,000 patients would be hospitalized in New York by April 11, the predicted “apex.” During his Sunday briefing, however, Cuomo acknowledged that the “curve” already appears to have reached a “plateau.” Hospital admissions for COVID-19 decreased from 1,095 new patients Friday to 574 on Saturday, and new ICU admissions also declined, while the number of patients discharged went up, from 1,502 Friday to 1,709 Saturday.

Cuomo was cautious in saying it’s still too soon to tell whether his state will continue this encouraging trend, but clearly if more coronavirus patients are being discharged from hospitals than admitted on a daily basis, the total number of hospitalized patients is not currently on an upward trajectory, contradicting the Murray model projection. As of Sunday, 16,479 COVID-19 patients were hospitalized in New York, which is about 22 percent of what the IHME model projected as the “apex” peak on April 11. While a sudden surge in cases cannot be ruled out — we can’t predict the future course of the outbreak — it now seems unlikely that New York’s hospital load will ever reach what the model predicted in late March.

New York is the epicenter of America’s coronavirus outbreak, with nearly 40 percent of all U.S. cases and the highest per-capita infection rate (632 cases per 100,000 residents). So if the computer-modeled projections have failed to accurately predict the course of the pandemic in New York, what about the rest of the country? In Florida, for example, Gov. Ron DeSantis came under harsh criticism for delaying a statewide stay-at-home order. DeSantis pointed out that Florida’s outbreak was mainly confined to three counties (Dade, Broward, and Palm Beach) on the state’s southeast coast, and argued that local restrictions were sufficient to prevent spreading the disease. National media demonized DeSantis as irresponsible, yet his state continues to have relatively low levels of coronavirus infection. Florida’s per capita rate (57 per 100,000 residents) is about 90 percent lower than New York’s, and in many counties is substantially lower than the statewide level. As in New York, the outbreak in Florida has fallen short of the model projections that forecast that the patient load from coronavirus cases would exceed the capacity of the hospital system. The IHME model forecast that Florida would not reach the apex of its outbreak until early May, so we don’t know what numbers the state will be reporting at the peak of the COVID-19 outbreak there, but so far the numbers are far below what they were predicted to be at this point.

None of this debunking of doomsday forecasts should be interpreted as an argument against “social distancing.” In fact, the effectiveness of these mitigation efforts may explain why the pandemic has failed to become the disaster that the projection models predicted. We are certainly not past the crisis point yet. Far away from the “epicenter” in New York, local outbreaks are turning into mini-epicenters. In Louisiana, for example, St. John the Baptist Parish and Orleans Parish now have America’s highest per-capita death rates from coronavirus.

While the cumulative totals of cases and deaths continue rising, the media are doing a lousy job of reporting the most important numbers: How many COVID-19 patients are currently hospitalized? How many new patients are admitted to the hospital each day, and how many patients are discharged? The reason for “social distancing” policies was to slow the spread of the disease, to “flatten the curve” of the pandemic and avoid overwhelming the hospital system. We have reason to believe that these policies are succeeding in that regard, and something else may explain why we may be averting the “apex” crisis: chloroquine. The anti-malarial drug which Trump famously touted as a “game-changer” in the fight against coronavirus is now being prescribed to thousands of patients, and anecdotal reports indicate that the drug is effective. The number of COVID-19 hospitalizations may have been reduced by this treatment and, if so, chloroquine was probably a variable not factored into the models that projected a shortage of ventilators and ICU beds.

We are still a long way from the point at which we can evaluate the course of this pandemic with the safety of hindsight. It may be many weeks before it is considered safe to hold large gatherings at church or sporting events. We are doing better than the doomsday models predicted, however, and this is good news. When will the media report that news?