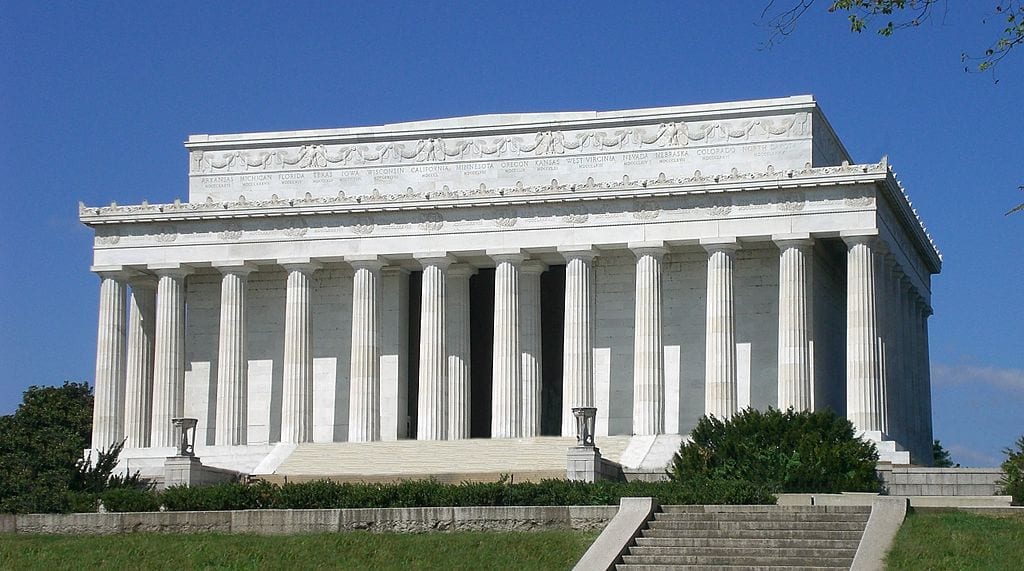 The famous memorial stands astride the banks of the Potomac River, facing the Washington Mall. The National Park Service, as here, says this of the mammoth marble statue of a seated Abraham Lincoln that dominates the memorial’s interior:

“In this temple, as in the hearts of the people for whom he saved the Union, the memory of Abraham Lincoln is enshrined forever.” Beneath these words, the 16th President of the United States sits immortalized in marble as an enduring symbol of unity, strength, and wisdom.

It is worth recalling the Lincoln Memorial and the memory of the president that it enshrines as America deals on a daily basis with a national pandemic emergency that certainly has gathered as much attention if not — at least yet — as many casualties: the Civil War.

What brings old Abe to mind is the recent dust up in which critics of President Trump have done two highly contradictory things. First, the demand arose that the president unilaterally declare, in the words of the New York Times, “a national lockdown.” Then, when the president made bold to expand on his thoughts of unilaterally reopening the American economy, the Times went in the other direction completely, running this op-ed by Georgetown law professor Neal Katyal. The object of Katyal’s fury — and presumably of the Times editors who ran his piece — was this statement by President Trump when discussing his ability to reopen a shuttered economy. Said Mr. Trump:

When somebody is the president of the United States, the authority is total. And that’s the way it’s got to be. It’s total.

In terms that would even have made President Richard Nixon blush, our commander-in-chief sounded more like the leader of some tinpot dictatorship than of the United States.

In other words, when the issue was a presidential order that would impose a “national lockdown” on the country, the Times was all for it. But when an order doing the reverse was at issue, suddenly the president was being depicted as having “sounded more like the leader of some tinpot dictatorship than of the United States.”

Notably, Katyal and the Times have not been alone in peddling the Trump-as-tyrant tale. Well aside from left-wing media, Democrats have not been shy in saying a version of this, as illustrated here by House Judiciary Committee Chairman Jerrold Nadler, who grandly stated, “We will oppose any effort by the president to make himself a king and a tyrant.”

Which brings us back to that marble statue on the Mall and the president it so famously celebrates. Back there in the mists of time — March of 2013 — an associate professor at the University of Kansas, Jennifer L. Weber — took to the pages of, yes the New York Times, to remind Americans of a constant debate that swirled around America’s now-beloved 16th president while he was in office. The title of her piece:

Was Lincoln a Tyrant?

In which she recalls this:

Lincoln’s critics witnessed his expanding power with alarm. They accused him of becoming a tyrant and warned that his assertions of authority under the guise of “commander in chief” threatened the viability of a constitutional democracy.

Lincoln ignored his foes and kept moving. And, despite lingering discomfort with some of his actions — particularly around the issue of civil liberties — history has largely vindicated him. Why?

Why indeed. Here was a president who suspended habeas corpus. Supreme Court Chief Justice Roger Taney ruled that only Congress had the authority to do this — and Lincoln promptly ignored the ruling. He asked as he did so,

Are all the laws but one to go unexecuted and the government itself go to pieces lest that one be violated?

Weber goes on, recounting this particular part of the Lincoln-as-tyrant lore. Whether unilaterally issuing the Emancipation Proclamation or a declaration of martial law, the beloved president celebrated today on the Mall was seen in the day by many as a tyrant. Indeed, after shooting Lincoln, assassin John Wilkes Booth yelled “Sic semper tyrannis” — “thus always to tyrants.”

Lincoln was willing to do anything he thought was right to win the war. He favored “the most vigorous and active measures to bring the war to a speedy close, and totally opposed … any compromise of any kind or character,” a friend said.

President Trump is borrowing directly from Abraham Lincoln in declaring the fight with the coronavirus pandemic must be fought as if the nation were at war. But in fact Trump’s actions, actual and proposed, come nowhere close to the accrual and use of presidential power as exercised by Lincoln.

If President Abraham Lincoln was a tyrant, President Donald Trump is no Lincoln.