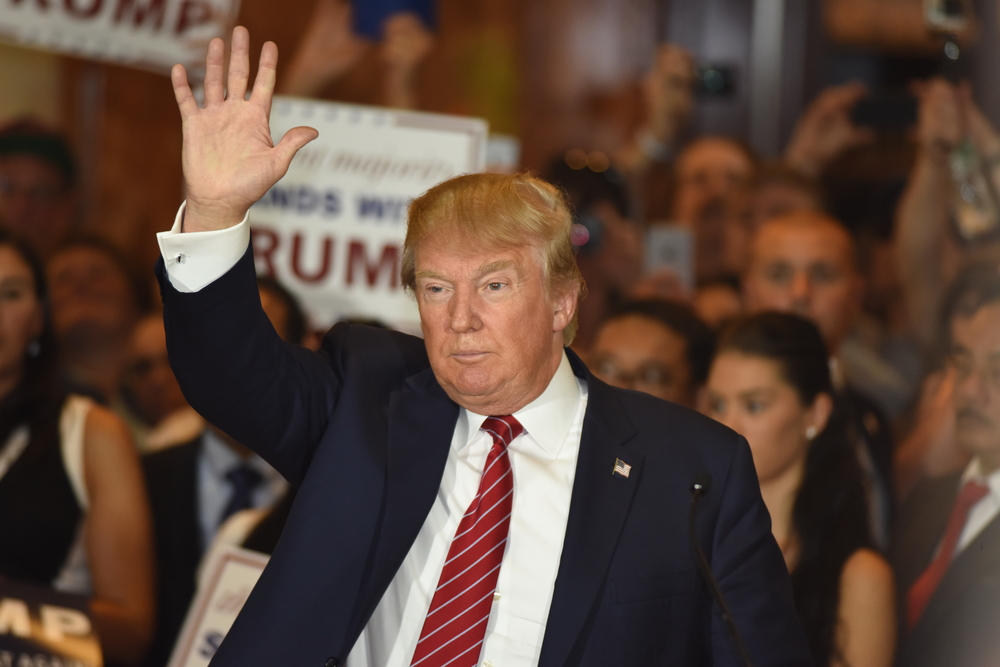 Our country is in serious trouble. We don’t have victories anymore. We used to have victories, but we don’t have them. When was the last time anybody saw us beating, let’s say, China in a trade deal? They kill us…. When do we beat Mexico at the border? They’re laughing at us, at our stupidity…. The U.S. has become a dumping ground for everybody else’s problems…. Last quarter, it was just announced our gross domestic product — a sign of strength, right? But not for us. It was below zero. Whoever heard of this? It’s never below zero. Our labor participation rate was the worst since 1978. And our real unemployment is anywhere from 18 to 20 percent…. Our enemies are getting stronger and stronger by the way, and we as a country are getting weaker…. Sadly, the American dream is dead. But if I get elected president I will bring it back bigger and better and stronger than ever before, and we will make America great again.

Sound familiar? That was former President Donald Trump back on June 16, 2015, when he famously came down the escalator to much hubbub and fanfare at Trump Tower, in a now crime-infested and economically famished New York City, to announce that he was running for president of the United States. The billionaire real estate mogul and reality TV star, whom the Left used to routinely shower with praise, and whom rap stars used to regularly quote admiringly in their lyrics, had very little to gain and a lot to lose. Little did Trump know how much his businesses would suffer and how much his family and associates would be harassed or how much time the corrupt and disgraced Fourth Estate would devote to concocting erroneous, false, and unverified hit pieces about him and his family out of thin air.

Who knew that these days, due to their hatred of all things pertaining to Trump, the New York Times, the Washington Post, CNN, and MSNBC would have about as much credibility as the National Enquirer? Who knew that Hillary Clinton’s campaign would pay a former British spy to create a salacious dossier full of unsubstantiated and profoundly stupid accusations about Trump that would become the basis for the thoroughly debunked Russian collusion narrative, and the editors at the same newspaper that broke the Watergate scandal would have no concern about that? Who knew that former President Obama would weaponize the Deep State FBI with unlimited taxpayer dollars for a search and destroy mission, and even after two years of finding zilch on Trump or anyone associated with his campaign, the dishonest mouthpieces on CNN and the sanctimonious writers at the Times still would not be able to bring themselves to absolve Trump of any wrongdoing?

At this point, there is no denying that our country is in serious trouble. Unless running America straight into the ground is the objective (which it could very well be), Joe Biden’s presidency has been an unmitigated disaster, by every available metric. His rhetoric bears no resemblance to reality. Crime is up everywhere, and mask mandates, more shutdowns, and COVID hysteria are returning. The consumer price index is at its highest point since 2008. The price of gas and the cost of used cars and trucks are up 45 percent from a year ago. Even the prices of food, energy, lumber, and houses are up substantially from last year. Small business owners are struggling to hire workers.

Meanwhile, the number of illegal border apprehensions, primarily from countries to our south, including Mexico, Honduras, Guatemala, and El Salvador, have been smashing two-decade-old records virtually every month since Biden moved into the White House. At the same time, those who wish to escape the communist oppression in Cuba are locked out by the Biden administration. China continues to expand its operations in the South China Sea. Israel is under attack again, Iran continues to enrich its uranium with the stated goal of wiping both Israel and America off the planet, and Biden rewards the Mullahs by removing sanctions and trying to cut a deal with the leading state sponsors of terrorism.

In the not-so-unlikely event that Biden resigns or is forced out of the White House before his first term is up, waiting in the wings is Kamala Harris, one of the most inept and unlikeable vice presidents in history. And many Americans aren’t happy about it, to put it mildly. To paraphrase Howard Beale, “We’re mad as hell, and we’re not going to take this anymore!”

Which brings us back to Trump. I do not know what his political aspirations are for running for president again in 2024, nor do I know why he would want to subject himself, his family, and his associates through another four plus years of abuse, lies, smears, and Trump Derangement Syndrome should he decide to run again and win. But our country desperately needs him, and his 75 million supporters still love him. Need proof? All you have to do is watch the thousands of people who showed up at some of his recent rallies or hear the thunderous applause he received at a recent UFC fight, which the fake news pathetically ignored.

Maybe Trump knew what he was getting himself into all along. Maybe he thought it was worth the risk. After all, he ran for president to save America from the onslaught of tyrannical left-wing socialists who are openly committed to the destruction of our country.

He ran for office to save women’s sports, not to allow men to compete against women, including in wrestling. He ran for office to restore patriotic and historically accurate education, not to indoctrinate America’s youth by teaching them to hate our country and one another with the poisonous Marxist ideology of critical race theory. He ran for office and promised to cut regulations, lower taxes, help our farmers, renegotiate unfair trade agreements, and allow the free market to prosper, not to demonize capitalism and the creation of wealth. He ran for office to support our police officers and our veterans and to treat all Americans fairly, not to divide us and make every single issue about race, class, gender, and victimization. And he ran for office not because he needed the fame or the money but to empower every citizen to be able to achieve the American Dream.

Maybe the answer to the question of whether or not Trump should run again lies in the Rudyard Kipling poem “If”:

If you can meet with Triumph and Disaster
And treat those two impostors just the same;
If you can bear to hear the truth you’ve spoken
Twisted by knaves to make a trap for fools,
Or watch the things you gave your life to, broken,
And stoop and build ’em up with worn-out tools….

Then you should run for president again in 2024.

Trump is a builder. And builders never quit until the building is finished.