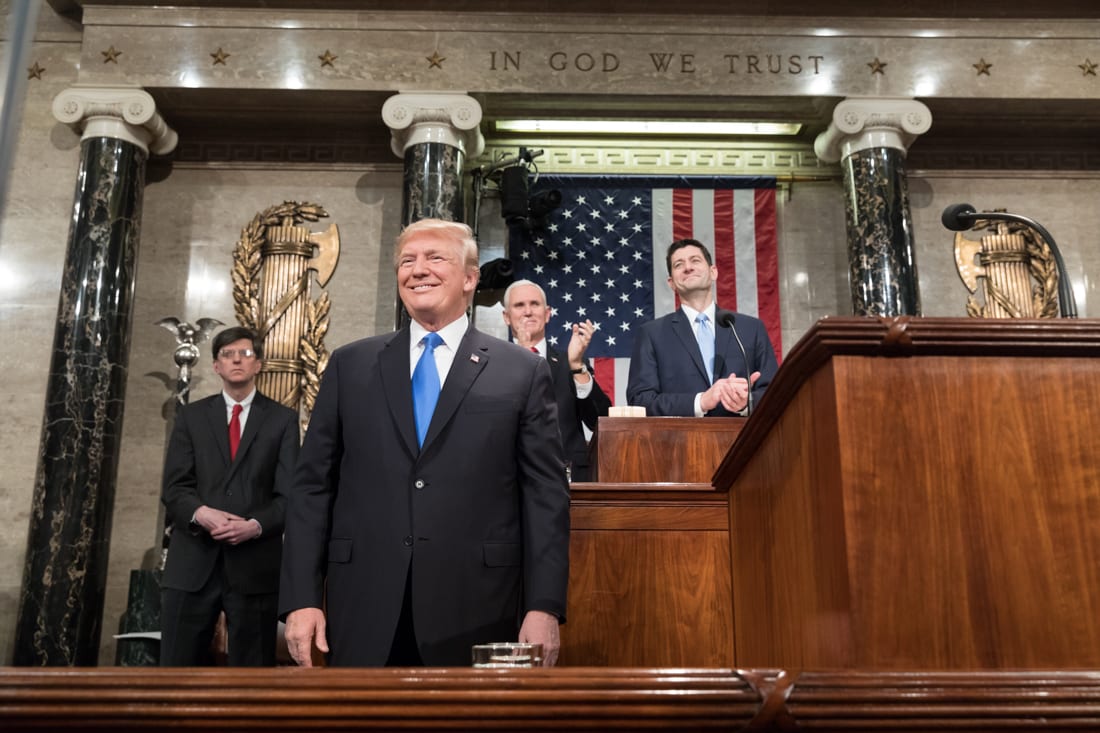 President Donald Trump frequently brings up prison reform at his Make America Great Again rallies. The subject is on his short list of favored topics, like the wall at the Mexican border and killing NAFTA.

Trump brought up prison reform in his 2018 State of the Union address. On Monday, he thanked the International Chiefs of Police for working with him on the issue.

The question is, will Trump embrace reform of federal mandatory minimum sentencing?

At times Trump looks as if he is ready to make the plunge. In June, he commuted the sentence of Alice Marie Johnson, a great-grandmother sentenced to life without parole for serious but nonviolent drug offenses, at the request of reality TV star Kim Kardashian.

“How this would have happened — and maybe it was a different time, a different age,” Trump said of Johnson’s life sentence during an extended phone interview on Fox and Friends Thursday morning. He sounded baffled as to how Johnson could have been sentenced to prison for the rest of her life with no possibility of parole, even though she is hardly alone.

Trump went on to support reform to address the inherent unfairness in federal sentencing.

The law-and-order president is on to something. Federal mandatory minimum sentences were supposed to ensure that drug kingpins served hard time. But there are too many stories such as Johnson’s of mid-level or low-level offenders sentenced to decades, even life, behind bars.

According to the Sentencing Project, almost 2,000 federal inmates are serving life without parole for drug offenses.

A 2017 report by the U.S. Sentencing Commission found that while the 1986 Anti-Drug Abuse Act was supposed to impose mandatory minimum sentences on “major” and “serious” drug traffickers, they are applied to a third of couriers and a quarter of mules. Many offenders sentenced to mandatory minimums “had little or no criminal history.”

Since low-level offenders have less information to barter for a lighter sentence, they are less likely to have time shaved off their sentences in return for cooperating with authorities. Johnson was sentenced to life while some co-defendants who testified against her saw their terms reduced.

Crime and punishment used to be a right-left issue with conservatives pushing for harsh sentences and liberals pushing for short time and counseling.

In recent years, however, conservatives have peeled away from the lock-’em-up model because it is draconian and pricey.

Mark Holden, chairman of the Koch-funded Freedom Partners, hailed the commutation of Johnson’s life sentence as a sign Trump “understands that our country has an over-incarceration problem caused mainly by antiquated ‘tough on crime’ policies of the failed War on Drugs from the 1970s to the present.” Holden called on Trump to commute more such sentences.

Trump’s focus has been on the First Step Act, which stands for Formerly Incarcerated Re-enter Society Transformed Safely Transitioning Every Person. The bill, which enjoys bipartisan support and passed through the House by a 360-59 vote, does not include sentencing reform, but it does fund programs designed to help inmates succeed when they have served their time.

Molly Gill, vice president of Families Against Mandatory Minimums, wonders if Trump’s Fox and Friends comments could signal he is ready to expand his approach in the name of fairness.

“I think clemency does have the power to open presidents’ eyes to see that sometimes the justice system misfires,” Gill told the Review-Journal. “I’m glad that the J case did that.”

The more Trump looks at Johnson, the more he might see that the federal system throws away too many people for decades, even life.

And that should be a problem.

As Pat Nolan, director of Center for Criminal Justice Reform and former GOP California state lawmaker who served 29 months in federal prison for racketeering, put it, “Conservatives should not accept any bureaucracy as perfect.”