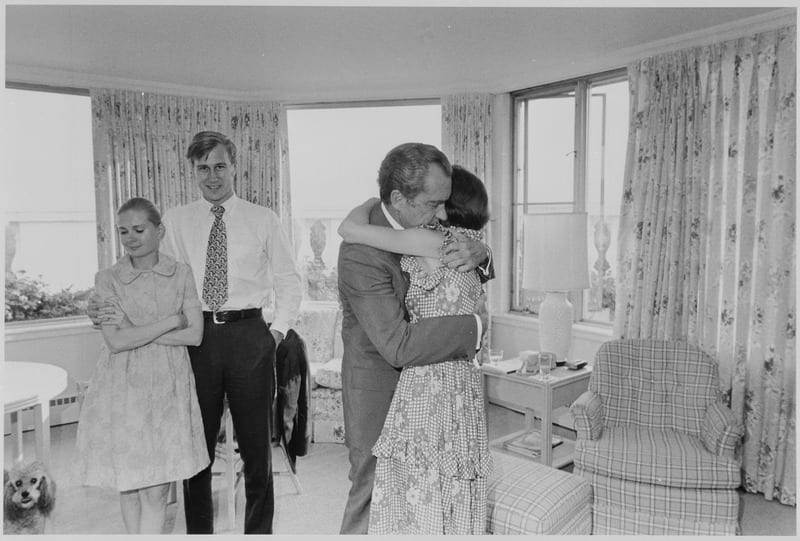 August 9 is the 45th anniversary of the resignation of Richard Nixon, the only president in American history to resign or be removed from office. We know what triggered his resignation. He was already on the ropes after two and a half years of Watergate revelations, but what ended any and all defense was the release of the “smoking gun” transcript on August 5. It showed that Nixon had concurred with his staff’s suggestion that they get the CIA to tell the FBI not to interview two Watergate witnesses.

As astonishing as it may be to Americans, who have been assured that the smoking gun tape is proof positive of Nixon’s early cover-up involvement, every person connected to that particular conversation now agrees that the CIA gambit was an effort to prevent disclosure of prominent Democrats who had made substantial contributions to Nixon’s re-election campaign under assurances of absolute secrecy.

I should know. I was there: a member of Nixon’s Watergate defense team, the third person to hear the smoking gun tape, the one who first transcribed it, and the one who termed it “the smoking gun.” Here is a much fuller explanation of what actually happened. But the bottom line remains unchanged. Nixon’s Watergate defense lawyers completely misinterpreted the tape, and their mistake ended his presidency.

John Dean, Nixon’s principal accuser, has known of this mistaken interpretation from the very outset, but found it in his interest to keep quiet. He was, after all, the one who had suggested the CIA gambit to Bob Haldeman in the first place. Yet it was not until his 2014 book, The Nixon Defense, that he finally got around to admitting the truth. Read his full footnote, which concludes, “had Nixon known that he might have survived its disclosure to fight another day. In sum, the smoking gun was shooting blanks,” here.

This is one heck of a revelation, albeit 40 years too late, and it is certainly not the testimony that Dean gave at the Watergate cover-up trial, when Haldeman’s liberty hung by a thread and Dean had sworn “to tell the truth, the whole truth, and nothing but the truth.”

Regardless of whether you are convinced that the smoking gun tape has been totally misunderstood (as I now do), it is uncontroverted that no one knew of any Nixon involvement on June 23 prior to the tape’s August 5 release. So, we must ask ourselves, just what was it that put Nixon down for the count, well before that tape’s release? After all, grand jurors had named him an unindicted co-conspirator in the Watergate cover-up on March 1, 1974, and the House Judiciary Committee (HJC) had adopted its first Article of Impeachment, based on similar accusations of Nixon’s cover-up involvement, on July 27.

The answer is an equally astonishing Watergate revelation. Special prosecutors had assured both grand jurors in February and HJC staff in July that they could prove that Richard Nixon had personally directed the payment of blackmail to E. Howard Hunt, one of the masterminds of the Watergate break-in — and that he had done so on the afternoon of March 21, 1973. As it developed, their accusation was erroneous, but (unfortunately for Nixon) it was also conveyed in total secrecy, so Nixon’s defense team had no idea the accusation had even been made — so they were not in a position to challenge or refute it.

Here’s the backstory. Nixon had learned of Hunt’s blackmail demands from his March 21 meeting with John Dean. This is the date of Dean’s infamous “cancer on the presidency” revelations to Nixon, a day which both men agree was the first time Dean had told Nixon any specifics about ongoing cover-up efforts. While it is abundantly clear from the tape of that meeting that no decision was made to meet Hunt’s blackmail demands, prosecutors were positively thrilled when they established that a payment had been made to Hunt’s lawyer that evening.

From the prosecutors’ point of view, their case was quite clear. Dean’s meeting with Nixon ended at noon, and the Hunt payment was made at 10 p.m. that very evening. What had to have happened in the intervening 10 hours was that (i) Nixon had to tell Haldeman to order John Mitchell, his former Attorney General and re-election campaign director, to make the payment. (ii) Haldeman had to phone Mitchell (who was then in New York). (iii) Mitchell had to relay this same instruction to his former top aide, Fred LaRue, who was acting as “paymaster” for the Watergate break-in defendants. (iv) And finally, LaRue had to make the payment to Hunt’s attorney that evening (which they had now established that he had done).

The prosecutors’ hypothesis has remained entirely circumstantial. No one, then or in the intervening 45 years, has testified to this set of events — not Nixon, not Haldeman, not Mitchell, and not LaRue. Yet the following acts did occur: Haldeman did call Mitchell right after the Dean meeting (They both claimed that it was to invite him to D.C. the following day), Mitchell did speak to LaRue and “approve” a payment to Hunt (the only questions being who originated the call and at what particular time this conversation had occurred), and LaRue did make the payment about 10 p.m. that evening (Nixon’s lawyers mistakenly believed that this payment actually had occurred earlier that week).

There is no question but that this version of presidential involvement is what Watergate prosecutors assured the grand jurors. Here is their internal analysis of Nixon’s culpability. Here is their book’s description of their discovery. Here are excerpts from their original Prosecutive Summary on Nixon. Nonetheless, it is little wonder that the grand jurors agreed to name Nixon an unindicted co-conspirator. Four months later, prosecutors told the same story to HJC staff. Here is the relevant sections from their updated Prosecutive Summary, and here is the description of how they came to share it, in secret, with HJC staff.

Keep in mind that all of these representations were written strictly from the Special Prosecutors’ point of view. They sound authoritative and fairly reek of prosecutorial confidence. But they are completely one-sided and untested. When prosecutors’ version of events was presented in court, with their witnesses under oath and subject to cross-examination, it turned out that their facts were not provable, their timing of events was unsupportable, and the testimony of their own witnesses showed how their purported actions of President Nixon could not have occurred as they had alleged.

One can only imagine what similar sorts of assertions and prosecutorial ideas are contained within the files of the Mueller prosecution team.

But note the key consistency: there were no public accusations, nor could prosecutors produce a single witness to testify to their version of events. Their case was — and remains — totally circumstantial. It is a common fallacy, even deserving of a Latin description: Post hoc, ergo prompter hoc (“This followed, therefore was caused by”).

Those of us on Nixon’s defense team remained unaware of prosecutors’ allegation of Nixon’s personal involvement. Had we but known, we could have refuted their allegation. Had Nixon but known that this was the principal allegation being made against him — that he had personally approved the payment of blackmail to Howard Hunt — he would never had resigned, since he would have known it to be untrue.

But Nixon did resign — in the aftermath of the release of the smoking gun transcript. Three months later, when prosecutors sought to prove their allegation of Nixon’s personal approval during the course of the Watergate cover-up trial — with their witnesses having to testify under oath and subject to cross-examination — they were totally unable to do so: Fred LaRue, by that time having become a government witness and having no reason to lie, testified (i) that he was the one who had called Mitchell (and not the reverse), (ii) that he had spoken to Mitchell in the morning (and thus before Nixon even learned of Hunt’s monetary demands), and (iii) that he had taken it upon himself to pay only Hunt’s outstanding legal bills and not his requested additional funds (which would have been contrary to Nixon’s alleged instructions, had they been conveyed through Haldeman and Mitchell).

By this time, however, the total refutation of their secret allegation concerning Nixon’s payoff instructions had become irrelevant. Nixon had resigned the previous August, and the smoking gun tape seemed to prove his early cover-up involvement in any event. Since no one knew of their allegation of Nixon’s personal wrongdoing, it was as though it had never happened, and no one could claim that Nixon had been unfairly hounded from office. The underlying facts — and their significance — have only emerged in recent years.

Hamlet, in the opening scene of Shakespeare’s well-known tragedy, observes, “Foul deeds will rise, Though all the earth o’erwhelm them, to men’s eyes.”

And such is the case today. Watergate special prosecutors, as well as John Dean, have known all this time that Nixon was driven from office by their secret, but erroneous, allegation of personal wrongdoing. Now, 45 years too late, we do, too.

One can only wonder what is going to come out over the next 45 years about the two-and-a-half year effort to bring down President Trump. The Mueller team records, along with the FBI’s, may be sealed today, but they won’t remain so forever.

Geoff Shepard came to Washington as a White House Fellow following graduation from Harvard Law School and then served on President Nixon’s White House staff for five years, including acting as deputy counsel during his Watergate defense team. He can be reached through his website: www.geoffshepard.com.