by Dov Fischer
A BLM protest at the University of Maryland on June 8, 2020 (Joao Kermadec/Shutterstock.com) 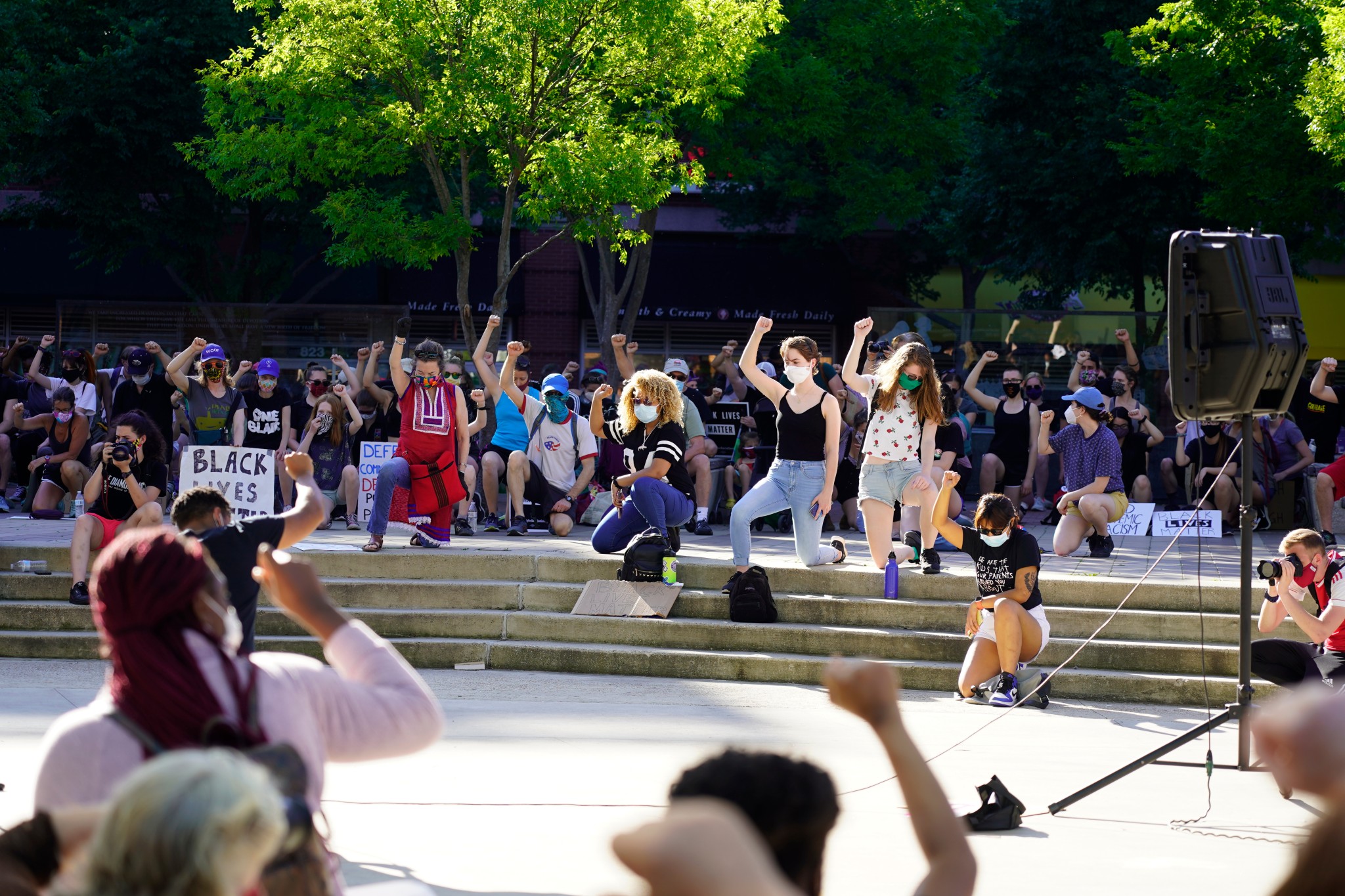 It feels so wonderful, so liberating, that I get to share my thoughts orally and in print. So many of my colleagues, by contrast, whisper to me their beliefs — identical to mine — but terrified to be “found out.”

Yes, it is risky amid cancel culture, with the “progressive” woke roaming the hallways and monitoring the classrooms for conservatives to fire. It helps that I worked gainfully for many years and, with G-d’s help, put some money aside for later when I no longer would depend on any tyrant to dictate what I may think, say, advocate. As an Orthodox Jew, I knew I always would be in a minority of thought. We Jews make up only two percent of America, even less of other societies, and we Orthodox — the Jews who actually believe every word of the Torah is true and eternal, and who live by what we preach — compose maybe only 15-20 percent of all Jews. So there ain’t a ton of us. But we are true in belief and deed.

The tyranny of thought on America’s campuses today comprises really nothing much different from the tyranny Vladimir Putin would impose on Ukraine — maybe even worse. Really. It is so easy to see from afar that tyranny is wrong, and yet we tolerate it at home, right under our noses. So many of my very readers, deep conservatives, nevertheless send their kids to colleges where twelve years of values-driven elementary school and high school will be uprooted through Leftist / “Progressive” / Woke brainwashing and reeducation. Their children — their lives’ greatest investment and work — will be destroyed. And in the cases of a few wealthy people, they even will endow college chairs or academic centers at their alma maters, only to remain oblivious that their hard-earned dollars of a lifetime are being doled out to fund programs diametrically opposed to their beliefs.

It actually is a blessing that Critical Race Theory finally entered kindergartens and the first grade, along with teaching six-year-old boys that they really are girls waiting to blossom and first-graders among girls that they just need a penis surgical attachment to their groin to make their lives complete. Until this garbage — this same-sex and transgender garbage — entered the lower grades, parents did not rise up in arms. Only now does that outrage stir revolt. It should have stirred the same mutiny ten and twenty years ago as the same garbage entered the colleges and universities, but parents were sanguine. “Yes, let us borrow $60,000 in parent PLUS loans to have our lives’ most precious investments — our children — brainwashed and turned from values-driven Christians, Muslims, Jews, and even values-driven atheists to peons in service of the New Order.”

How does brainwashing work on college kids? No differently from how it works on children or on prisoners in Chinese reeducation prisons and camps. You place people in an environment where everyone else in the group thinks a certain way — or presumes that everyone else there except he thinks that way. The group dynamic overwhelms — to stand alone. How lonely to stand alone! Welcome to “Sociology 103: Introduction to Groupthink.”

Into the classroom walks a Master of Thought. We title that person “Professor.” This Master of Thought stands behind a desk, which very subtly adds a distance and partition, a non-approachability, that imparts a mystique of mastery. We are told the Master of Thought bears Truth and Wisdom — i.e., a diploma that says Ph.D. or Psy.D. or M.Phil. or D.D. or some other nifty acronym — and we are awed, as if sitting on the Himalayas before a Hindu guru of the Bhagavad Ghita. Few of us pause to ask or think: “I am as smart as he or she when it comes to transgender garbage. He may know more Ezra Pound and T.S. Eliot literature or Kantian theory or Wagnerian opera or some other specialized area of study, but he or she does not know a darned thing more than I do when it comes to human nature or human sexuality or any of the just-named specialties in which he or she did not concentrate.”

Thus, with the setting complete, the brainwashing ensues. For four years — or maybe five or maybe even six — the young post-adolescent will remain in the group bubble, rewarded with a unique life experience of dorming away from home, perhaps having social and intimate physical opportunities that will not quite ever again be so readily available in an environment devoid of having to earn a living and support a family. For a brief moment in time, the environment will offer freedoms that will not come back. But the price of the freedoms is not free. The price is the subtle coercion to adjust one’s thinking and beliefs to fit in. One will learn to recalibrate Truth — and its very pursuit — to accord with the others. After four to six years, the reeducation is complete.

Suddenly, one emerges spouting nonsense as though wisdom, arrogantly sure he or she has been exposed to Ultimate Truth that the peons cannot grasp. Like an Ocasio with a degree from the same Boston University that once graduated future Nobel Prize winners but now graduates a greater proportion of fools imbued with nonsense, each such graduate emerges sure of himself, herself, virtue-signaling to the naifs who lack the depth of this twenty-year-old who never has borne responsibility nor even leveraged his or her youth to risk truly everything for someone else’s freedom and security.

And so we find minions speaking of “Black Lives Matter” as though BLM has anything whatsoever to do with the lives of Black people actually “mattering.” Ten thousand Blacks get murdered in America each and every year in inner cities governed by Democrat political infrastructures that contemn police, demoralize and defund them, restrict their authority to serve and to protect, and release accused violent criminals back into society as quickly as they can be apprehended.

In Louisville, a Black Lives Matter anti-gun “activist” enters the campaign offices of a Democrat candidate for mayor — and shoots repeatedly at the guy to assassinate him. Really. The BLMer somehow misses and gets apprehended. In less than 48 hours, Black Lives Matter bails out the aspiring assassin, and he is back on the streets. Meanwhile, the fool Democrat liberal who was targeted cries to the media that he cannot believe that a gun-discharging assassin can get out of custody and return to roam the streets so fast. D-uh. And who do you think introduced that change into our criminal justice system? Dirty Harry? No, it was people — morons — like the now-shaken aspiring Democrat mayoral candidate. It was OK when Black Lives Matter murderers were shooting at others and being released instantly. Then those policies reflected Woke compassion, White guilt and transformation. But now Black Lives Matter was aiming to murder the Democrat himself, even as other Black Lives Matter have been carjacking and battering select Democrat female Congressional representatives of the White persuasion.

Ah, the aphorism that a conservative is a liberal who has been mugged! Or — nowadays — almost assassinated.

Black Lives Matter? When the three words are capitalized, expect to find a coterie of bleeding-heart Whites behind those letters, earning income off the acronym, playing the acronym for their professional advancement and virtue signaling. Black Lives Matter? Expect to find African-American Marxists who own several million-dollar properties, students of the Bernie Sanders–Elizabeth Warren School of Marxist-Socialism that doles out crumbs to its followers while the leaders ooze in luxury. Indeed, even our precious Ocasio in her designer dresses and attending her $10,000-a-plate soirées and now flying first class, has begun learning the Game of Public Socialism: (i) from each according to ability, (ii) to each according to need — (iii) with extra bonuses for the leaders because, well, because.

It is easy to view Putin from afar and to recoil from living under a tyrant whose tyranny seems so, uh, tyrannical. And yet how many of us fear to speak, to write, to just say the words “To Purgatory with Black Lives Matter”? How many of us dare speak our minds? No less than Ukrainian anti-tank javelin missiles, the courage to say “To Purgatory with Black Lives Matter” — and to say it and write it — is part of the campaign to withstand tyranny’s encroachments.

To attend any or all of Rav Fischer’s weekly 90-minute live Zoom classes on the Weekly Torah Portion, the Biblical Prophets, the Mishnah, Rambam Mishneh Torah, or Advanced Judaic Texts, send an email to: shulstuff@yioc.org