We don’t need to launch into a recitation of examples to prove the reaction by the pro-abortion crowd to the publication of the Dobbs decision has been less than the traditional standard expected of a loser in the realm of law and public policy, do we?

If you’re foolish enough to get engaged in a social media debate with one of the anti-Dobbs sky-screamers, you might well run into an argument which looks like this…

“Cool so now free healthcare is next right since life is so important, right and we wanna support kids and make sure they get the best care? And then also programs to be sure to feed and clothe and support and provide free quality childcare will be enacted bc they care so much about kids and all is upcoming too? Oh and free quality prenatal services and free transportation bc unborn kid and all. If you care you care all of the way.”

I won’t say from whom this one came, but I can say I’ve seen versions of it with increasing frequency. Somebody somewhere cooked this stinker of an argument up and made it appeal to the Left, and particularly adherents to that philosophy with a certain set of physical features which indicate that biologically, abortion could be a potential choice at some point in their lives but given their qualities aesthetic and behavioral, it might not be very likely necessary.

I saw a press release Friday from a national lesbian group screeching about the darkness which has now come over the land. I thought that was a bit overwrought. One would be tempted to think the lesbians would have a slightly less melodramatic reaction to an adjustment in abortion policy.

This column has noted before that the Left has exceedingly awful arguments on the abortion issue.  This has been true for more than half a century. The Left had awful arguments before Roe v. Wade, truth be told, and one reason that case has been toxic for so much of our constitutional law since 1973 is that it was decided on awful arguments.

And now they’re reduced to grasping for socialized medicine and an uptick in cradle-to-grave welfare because going forward, in red states it won’t be so easy to kill the unborn?

If you’re the side that wants to kill kids right up until the point they naturally make the trip down the birth canal, or even after, you don’t get to pretend you’re the caring and compassionate people in the argument. You also don’t get to pretend that the government is the most committed caretaker of human life after the 50 year reign of terror your side has unleashed against the unborn, with the population of a mid-sized European nation wiped out of existence thanks to its ministrations.

But there’s something else going on. Sunday at Power Line, John Hinderaker articulated it quite well…

This is perhaps the dominant fact of 21st Century politics. Liberals don’t want to debate, they don’t want to persuade. They want to censor. They want some higher authority, whether the Supreme Court, Twitter, or corporate America, to declare all views but theirs out of bounds. They don’t want to participate in democratic politics, they want to rule by fiat. For all their wailing about “our democracy,” the last thing liberals want is the actual give and take of a democracy, which usually entails compromise.

I think that is the key reason for the Left’s hysteria over Dobbs. For liberals, having to argue, to persuade, to run for office, to participate in the messy work of democracy where you don’t always win, is a step backward. They had everything going their way, and now … this.

My only quibble is with his use of the word “liberals,” because they aren’t liberal. The liberals are no longer around. The Hard Left has routed them out of the cultural institutions they used to run, and they’re routing them out of Democrat politics. A liberal would engage in arguments with you; they’d offer mostly emotionalist drivel, and they’d concede most of the main facts surrounding the argument while insisting on solutions even they knew wouldn’t work, but you’d at least get a dialogue that would often be friendly.

These guys? They’re not liberals. They’re leftists. They’re bolsheviks. And they don’t share the values of regular Americans. Especially not the value of honest, reasoned debate to suss out the truth and the way forward.

But Hinderaker is correct in recognizing the Left is interested in shutting everyone else up, rather than persuading them of the correctness of their position.

Back to the stupid argument above. A friend noted that this is Gramscian leftism at work, at least in part. He reminded me that when the communists stood slack-jawed in disappointment that World War I didn’t trigger the proletarian revolution the followers of Marx had foretold, rather than recognize this was evidence Marxism was bunkum they set to work attempting to fix their message. (Much like today’s Democrats, as the country collapses under the weight of their mismanagement of everything from Newark to the baby formula supply to the Strategic Petroleum Reserve, have convinced themselves they have a messaging problem.)

Anyway, perhaps the most successful of the leftist thinkers of that post-WWI era was Antonio Gramsci, who didn’t just invent the notion of the March Through the Institutions but also identified three reasons the West wouldn’t accept international communism amid the catastrophe of the Great War. Those were Christianity, nationalism, and charity.

Non-communists would say that Christianity, nationalism, and charity are three features of modern Western civilization which are of sufficient value that it should be anathema to attempt to wreck them, or the West in turn, but to Gramsci the product was to wreck all three and then crash the capitalist society in toto.

And as my friend pointed out, the stupid argument above is the product of the Gramscian assault on charity. The government has to lard everyone up with a heaping helping of the dole if we can’t have abortion on demand, because the babies they can’t kill will otherwise die in the streets.

And if you’re skeptical of the welfare state, it means you don’t care about Post-Birth Americans. The idea that we as Americans can pitch in and help our neighbors in their time of trouble, that the civil society which has been proving itself at those care pregnancy centers the Left so ardently wants to set aflame might provide a loving and fulfilling solution to the problem of unplanned pregnancies, can’t even be discussed. 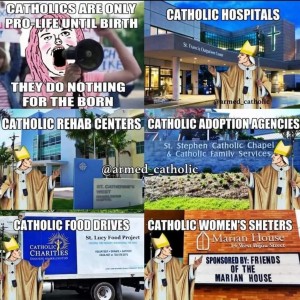 It’s tempting to pull your hair out and wonder how so many of our countrymen (and countrywomen, though you won’t find too many of these malignant non-thinkers out in the country) could have been led so far astray. Instead, though, we should recognize the opportunity. The Left has lost its ability to reason and persuade, and they’re way out over their skis. On this, and on most everything else. And even persuadable voters who aren’t dogmatically pro-life recognize the contrast.

The new political era in which people like this are no longer in a position to decide anything isn’t here yet. But it’s close. It just requires some foresight and backbone to navigate there.