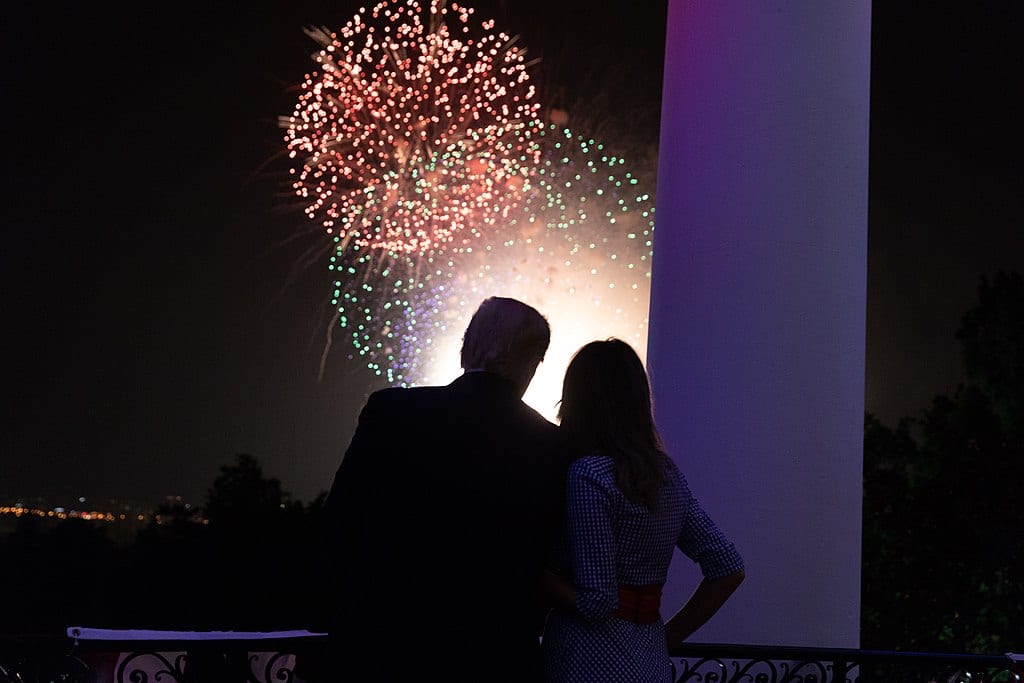 Trump takes over Fourth of July celebration, changing its location and inserting himself into the program

The story, among other things, said this, bold print supplied for emphasis:

President Trump has effectively taken charge of the nation’s premier Fourth of July celebration in Washington, moving the gargantuan fireworks display from its usual spot on the Mall to be closer to the Potomac River and making tentative plans to address the nation from the steps of the Lincoln Memorial, according to top administration officials.

The president’s starring role has the potential to turn what has long been a nonpartisan celebration of the nation’s founding into another version of a Trump campaign rally. Officials said it is unclear how much the changes may cost, but the plans have already raised alarms among city officials and some lawmakers about the potential impact of such major alterations to a time-honored and well-organized summer tradition.

If you were looking for an excellent example of bold misrepresentation of the facts, look no further — this story, based on a huge whopper, is it. It is fake news.

The whopper? That would be the idea that President Trump is — really, honest, the Post swears! — the first president to be “inserting himself” into the holiday’s festivities.

Somehow, someway, doubtless purely by accident, the Post seems to have forgotten the long history of presidents and the Fourth of July.

There was the 1976 Fourth of July celebrations which starred President Gerald Ford. Running for re-election that year in a tight race he would eventually lose to Jimmy Carter, Ford was dead center of this particular Fourth that coincided with the nation’s bicentennial celebration. There was Ford on television cameras everywhere as he hosted a mammoth celebration at Valley Forge, the site of the legendary hard times faced by General George Washington and his troops as they camped in the freezing winter cold of 1777. There, with much fanfare, Ford signed legislation that turned over the property to the National Park Service. Not content with all the attention to the huge party he was hosting in Valley Forge, Ford made sure to end the day by going into nearby Philadelphia where he went — with cameras trailing — to Independence Hall. Hey, no “inserting himself” into events there, right? Right.

As a matter of fact, being at the center of events on Independence Day from Independence Hall is catnip to presidents. In 1962, President John F. Kennedy commandeered the historic building where the Declaration of Independence was written and issued, addressing the nation in front of a large crowd that included the governors of the fifty states. His speech, discussing the relevance of the Declaration of Independence and the Constitution, was televised to the nation of course. It can be seen right here as JFK was televised in the day, um, “inserting himself” into the nation’s July 4th ceremonies.

In 1914 — before the advent of television — there was President Woodrow Wilson at the dead center of the nation’s Fourth of July celebration, speechifying at Independence Hall.

Then there was President Bill Clinton. In 1996, Clinton was busy “inserting himself” into a Fourth of July Celebration that took place at Goose Creek Bridge in Maryland. With the TV cameras trained on him, the President — like Ford twenty years earlier, running for re-election — was there to emphasize his environmental agenda by releasing a bald eagle into the wild.

In 2000, there was Clinton “inserting himself” into Fourth of July ceremonies yet again, this time in the middle of New York Harbor aboard the USS Hue City. As the television cameras rolled, according to the official records of “Operation Sail” or “OpSail,” Clinton “reviewed a 17-mile-long formation of imposing, gray-hulled titans-the frigates and destroyers of navies around the world, each man-of-war firing a one-gun salute as the president passed.” Got that? Not only was Clinton reviewing all those ships in front of cameras, but each “man-of-war” that passed him fired “a one-gun salute” to celebrate his presence.

Not to be forgotten is my old boss, President Reagan. As I well recall because I was there, the President celebrated the centennial of the Statue of Liberty on July 4, 1986 — from the deck of the USS John F. Kennedy the New York Times headlined the story this way:

REAGAN TO VIEW SHOW FROM CARRIER

President Reagan will watch the fireworks on the evening of July 4 from aboard the aircraft carrier John F. Kennedy, which will be anchored in New York Harbor southeast of Liberty Island, the White House said yesterday.

The half-hour fireworks extravaganza — which is being produced with three of the nation’s premier fireworks companies — is being billed by its promoters as the biggest fireworks show ever seen in the United States.…

At a news conference yesterday, Rear Adm. Richard E. Young, who is in charge of the International Naval Review during the Statue of Liberty centennial, said that his toughest task was handling the 100,000 requests for spots on the aircraft carrier.

Admiral Young said 33 modern warships from 14 countries would participate in the International Naval Review. On July 3, the vice commander of the Second Fleet will lead the warships under the Verrazano-Narrows Bridge and into the harbor to their appointed anchorages in the harbor and the Hudson River.

The President also addressed the nation from the deck of the USS Iowa. Which was, most assuredly, televised.

There are more stories like these about Presidents “inserting” themselves into the nation’s Fourth of July celebrations. Many more.

What stands out about the Washington Post’s story on President Trump’s upcoming participation in the 2019 Fourth of July celebration is the sheer dishonesty in implying that somehow, in some way, Trump is doing something that presidents of both parties have never done — namely being at the very center of one of these major league celebrations of the nation’s major holiday. It is, in fact, a long presidential ritual — the visual of leadership in action.

As President Trump could more than accurately say of this Post story — it is fake news.

And he would be decidedly right.