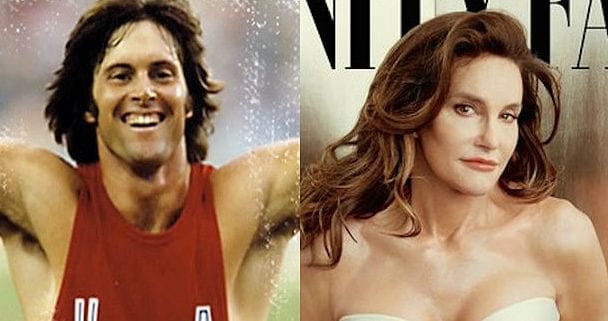 A college friend from Connecticut told this joke (it was also a joke made at the expense of Michigan Tech, the engineering school in the frigid U.P.) about Maine: “Maine, where the men are men, and women are, too.” Well. Connecticut could teach Maine a thing or two about women being men. This month, two boys competing as girls won first and second at Connecticut’s indoor track championships. “Good” people applaud this.

I’ve written before about how transgenderism destroys Title IX sports opportunities for girls and how this absurdly anti-science and anti-women stance will destroy women’s sports.

The image on the front page of the newspaper is revealing. It perfectly displays the differences between female and male anatomy and the biological advantages genetic males have against women even when the men use hormone blockers.

Look at the broadness of shoulders of the biological males compared to the biological females. Female sprinters (good ones) tend to have broader shoulders and narrower hips, but still cannot match the anatomical advantages that a biological male does. In addition, all females, even masculine ones, have a wider Q-angle. That’s the hip to knee ratio. And here, that difference is again obvious. Finally, look at the muscle density. The biological girls could work out their whole lives and not build that muscle naturally. Now, if they use testosterone and human growth hormones and steroids, maybe.

The 1976 East German swim team girls who were doped without their knowledge looked like this: 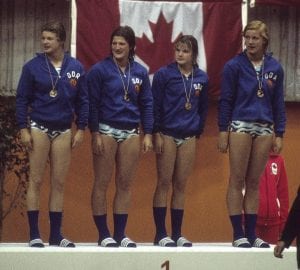 And still, they would have been beaten by guys. Easily. Why? Because even with the hormonal advantages of doping, their biology is still inferior to a man’s when it comes to the Q-angle, hip-shoulder ratio, muscle density, and most importantly, for swimming, lung volume.

Regarding hormones, men do not suddenly have more testosterone in puberty. To the contrary, boys, even in the intrauterine environment, are washed in different hormone concentrations than girls. They grow more quickly than girls. They’re different in babyhood.  It happens again in toddlerhood. It happens finally, forcing secondary sex characteristics in puberty.

This is science. And then, these boys, who would be average athletes if they were to run, swim, wrestle, etc. against other boys, demolish the field because of their formidable, and unfair, biological advantages. The girls running against the boys know the difference. From the Washington Times:

One of their competitors, Selina Soule, says the issue is about fairness on the track with wider implications. The Glastonbury High School junior finished eighth in the 55, missing out on qualifying for the New England regionals by two spots.

Soule believes that had Miller and Yearwood not run, she would be on her way to race in Boston in front of more college coaches.

“We all know the outcome of the race before it even starts; it’s demoralizing,” she said. “I fully support and am happy for these athletes for being true to themselves. They should have the right to express themselves in school, but athletics have always had extra rules to keep the competition fair.”

The Connecticut Association of Schools-Connecticut Interscholastic Athletic Conference, which governs high school sports in Connecticut, says its policy follows a state anti-discrimination law that says students must be treated in school by the gender with which they identify.

A transgender training expert says this later in the same article:

Harper is wrong. Biology matters. The DNA. The sex of the baby, child, teen, adult matters. The hormones make a difference but they are secondary.

Think of it this way. Lance Armstrong and the rest of the doping cyclists (which is about all of them, at this point) have extraordinary biology before they doped. A woman with similar testosterone levels could not even come close to the last place male finisher in the Tour de France and cycling is a lower body-focused sport where men and women have more muscle strength/per size parity. The biology of the males before the doping is already an advantage. The extra hormones are a boost.

Caitlyn Jenner, when he was Bruce, was at the top of his sporting field, the Olympic decathlon. He is still an avid athlete — regularly golfing, etc. His body, flush with female hormones now, cannot undo his sex advantages and he would still win every competition in his age range against women and probably nearly all men, too. His biological advantages are not limited to hormones and never have been.

Being a woman is not simply a matter of estrogen and progesterone. A woman’s hormones vary dramatically depending on her life cycle. For example, a woman’s testosterone elevates when she is pregnant. It also goes up proportionally against estrogen and progesterone during menopause. A female’s hormonal system is extraordinarily complex and ever changing. She can add more testosterone and growth hormone and even steroids to this mix but her bone density and structure, her brain, her lung capacity, muscle density, and on and on don’t magically change into a male’s.

Biological males cannot be women. Period. They can manipulate their hormones. They can receive breast implants. They can castrate themselves and mutilate their penises. None of these superficial changes can unwind the DNA helix.

The solution to the dilemmas of the gender dysphoric child wanting to compete as the opposite sex is simple, but not easy: let them compete, but do not let them win. They have biological advantages over their female compatriots. A girl “transitioning” to boy and on testosterone, also should be allowed to compete but not win. Every race, match, etc. should automatically go to her competitor. Why? Because she is hormonally enhanced. A boy competing against a girl is hormonally enhanced. It’s not fair.

This sort of incentive structure would help enforce the necessary outcome which is to go through puberty and graduate high school as the sex the child was born as. A person must be 18 in order to vote or to enter a contract. He or she should have to be an adult to make such a life-altering decision as gender reassignment. No one outside the home knows the sort of manipulation and psychosis that might be present to coerce a child into a certain outcome.

Should this nonsense continue, women will be harmed. They will have fewer venues to develop leadership, know what it’s like to compete and win, and broaden their experiences because why try when, as Selina Soule noted, the outcome is a given.