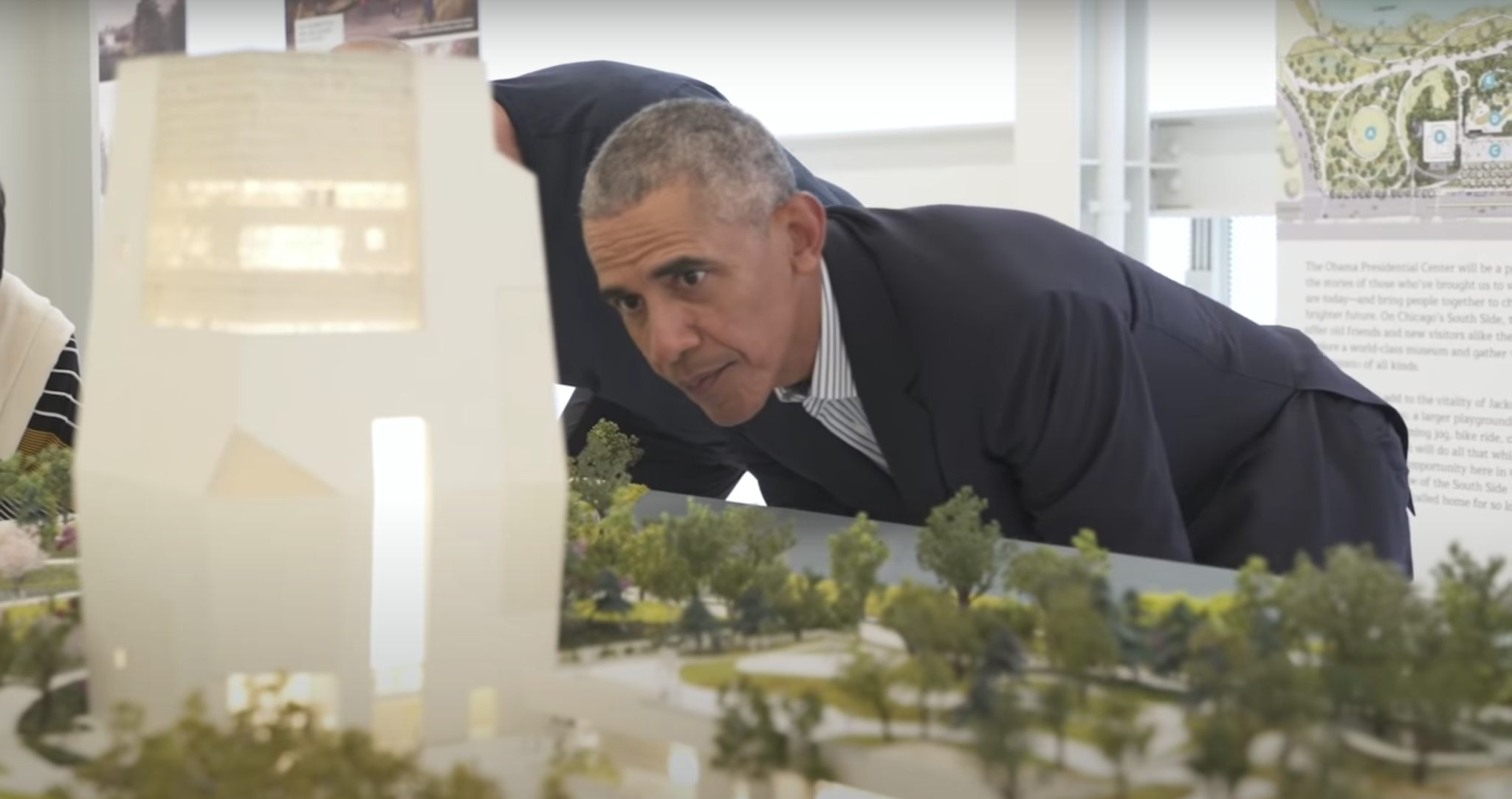 Barack and Michelle Obama broke ground Tuesday on what they have termed the “Obama Presidential Center.” It’s a presidential library — plus a museum, athletic center, playground, women’s garden, a wetland walk, a forum, an auditorium, a restaurant, and a test kitchen.

The project has been mired in controversy since its beginning, as community members in the South Side of Chicago have objected to the project, saying that it will destroy the historic Jackson Park where the center is located and lead to gentrification that will harm local black residents.

Faculty members at the University of Chicago wrote a letter voicing their objections, a Chicago advocacy group sued to stop the project, and Chicago residents have filled local newspapers with their protests.

One Chicago-area resident, John Deal, wrote in the Chicago Tribune that he objects to the park on the basis that it is “ugly.”

“A 225-foot tower and associated buildings,” Deal wrote, “are garish monstrosities that ruin the aesthetics of the surrounding parkland stolen from the taxpaying public.” 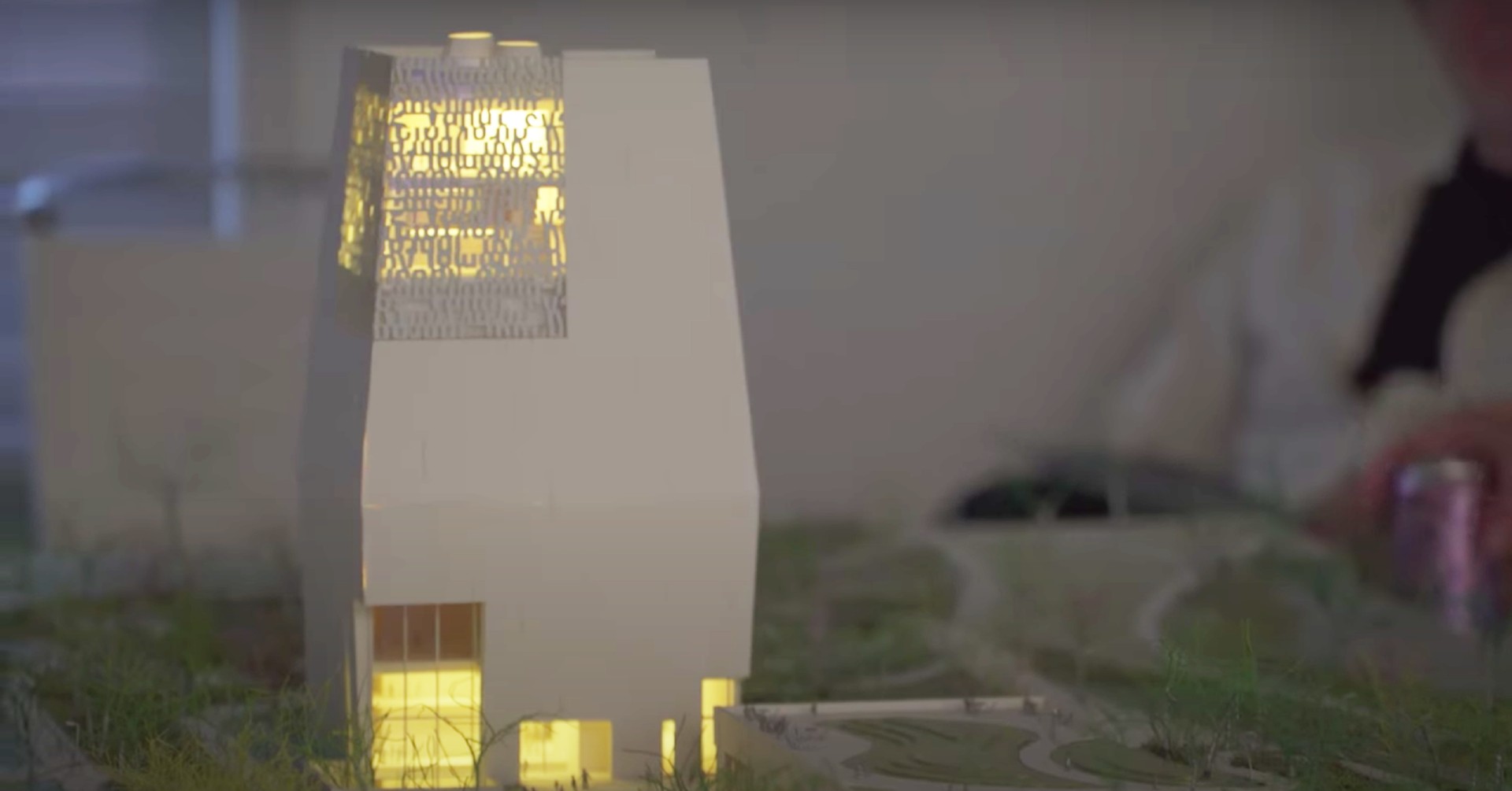 The center will include three buildings in geometric shapes made of slate-colored stone. The museum is the dominant building. It stands at 180-feet tall and is in a neo-Brutalist architectural style. The center of it is wider than the top and bottom. It perhaps resembles the alien spacecraft from the 2016 film Arrival. Large parts of it are devoid of windows, but there are cutaway holes as well as integrated text from a speech Obama delivered on the 50th anniversary of the Selma to Montgomery marches.

The two other buildings, the library and the forum building, are flat, rectangular buildings in a barebones modern style.

Obama has grandiose ambitions that the center will be a monument with imbibed meaning.

He said of the center, “We want them to go through the exhibits, the stories of my presidency, and say, ‘Oh, this is a part of me. This belongs to me.’” 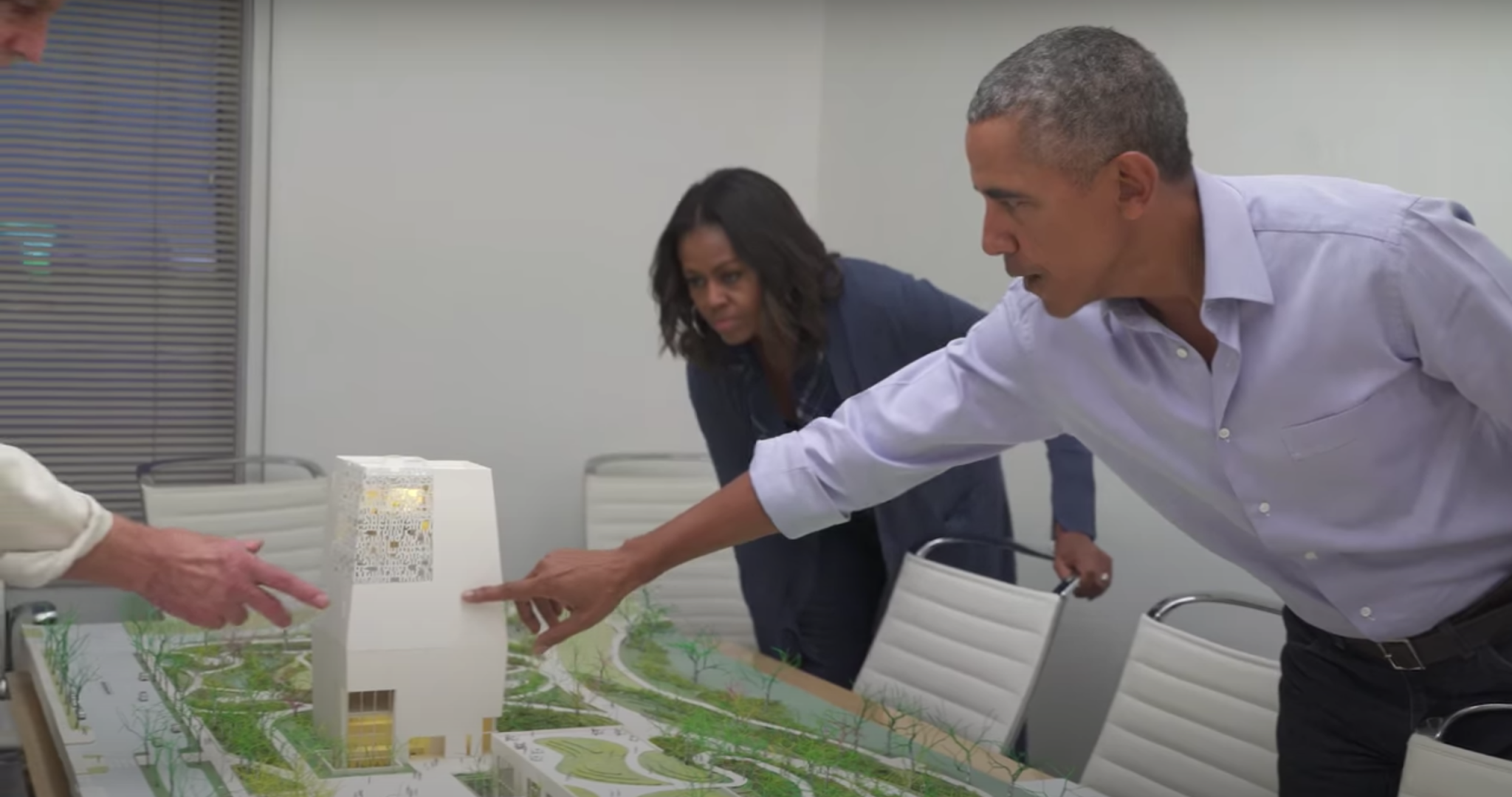 Obama examines the model of the campus of the Obama Presidential Library. (Obama Foundation/Youtube) 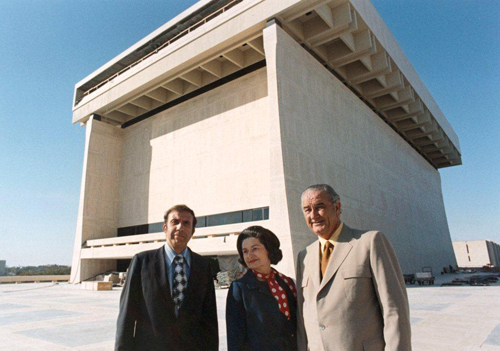 The Obama Presidential Center seeks to distinguish itself with fully digitized records as well as amenities that make the complex a pilgrimage destination.

Prior to the groundbreaking ceremony, Obama appeared on ABC’s Good Morning America on Tuesday to defend the center against its critics.

“The truth is, any time you do a big project, unless you’re in the middle of a field somewhere, you know, and it’s on private property,” he said, “there’s always going to be some people who say, ‘Well, but we don’t want change. We’re worried about it. We don’t know how it’s going to turn out.’”

Still on defense from allegations that the center will harm the local black community on the South Side of Chicago, the Obama Foundation released a 400-word statement Monday reaffirming its commitment to “anti-racism and equity.”

The statement said, “Our goal is to make sure every member of the Foundation team is committed to anti-racism, sets expectations for how we will engage, and makes space for the work.”

Chicago Mayor Lori Lightfoot, who attended the ground-breaking ceremony alongside Illinois Gov. J.B. Pritzker, acknowledged the center’s many problems: “It took many twists and turns, but due to the perseverance, dedication and hard work of many, we’ve arrived at this momentous day.”

The project is estimated to cost $830 million.