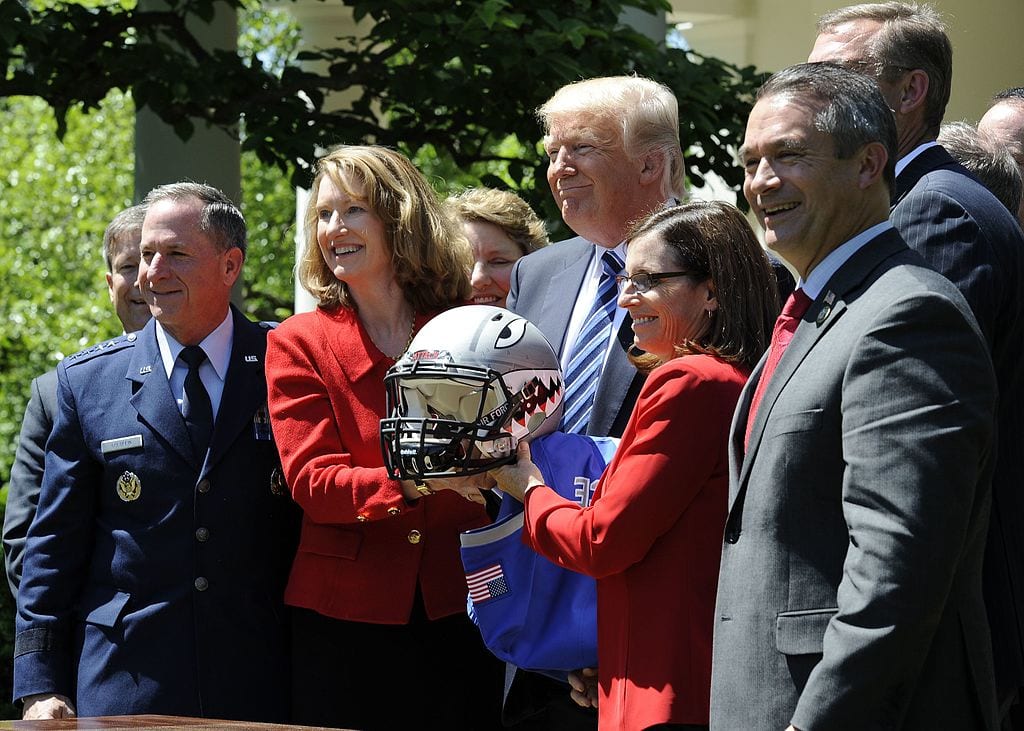 It’s been almost two years since the Great Cultural Revolution of America began. Do you recall where you were that hot August night when Colin Kaepernick took a knee during the national anthem? I don’t either. But we all remember the subsequent news barrage, don’t we? The mainstream media fell all over itself announcing that Kaepernick was the Social Justice Warrior that the world had been waiting for. Here, at last, was a black sports icon who could start a movement. All you had to do was open the New York Times to discover the San Francisco 49ers quarterback was really Martin Luther King Jr. The media had finally found its Chairman Mao in Kaepernick, and its Red Guard in the NFL (of all places!) which suddenly turned itself overnight into the sports-entertainment arm of the DNC.

Since Watergate, Republican politicians have been trained to kowtow to such baloney sentiments. Conservatives fear the media, and so they side-step or tap-out before fighting any cultural battle. Would President Trump also take a knee before the supposedly awesome power of Commissioner Roger Goodell and his league? He had just been sworn into office. As they used to say: Cometh the hour, cometh the man. At a political rally in Alabama, the President decided to wade into the controversy the way a bullfighter waves a red cape in the arena. Where any other conservative politician would equivocate or apologize, the President shouts “Ole!” He brazenly declared that NFL owners ought to fire players for “disrespecting the flag.” He then quipped that the owners should say, “Get that son of a bitch off the field right now. He is fired!” Got that?

This was the kind of masterful media pivot that PR firms will be discussing for the next hundred years. More than 200 NFL players were so “outraged” that the President said they should be fired for something that they were not doing at the time — they promptly did that very thing two days later. You read that right. The President, engaging in a bit of NFL fantasy football rhetoric, actually made the NFL charge the red cape. Roger Goodell, proving himself no smarter than his protesting players, tweeted that Trump’s comments were “divisive” and that the president showed “an unfortunate lack of respect for the NFL.” And so the battles lines were drawn.

Do I even need to tell you who won? Where others see only bad publicity, the President sees opportunity. He saw that the NFL was going to side with the media’s Rococo Marxists and millionaire Black Panther athletes, so he wrapped himself in the flag and grabbed a sword. And he’s been dining on beef ever since.

Do you doubt it? Roger Goodell announced a new policy on protesting the anthem last month, and guess what? You can’t do it. The NFL not only folded on the matter, it has been chased off the field. No one will hire Colin Kaepernick for fear of the backlash. Goodell doesn’t just look weak, he looks totally incompetent. That shaky voice of his at the press conference tells you everything: the President’s bullfighting sword was practically sticking out of his neck. It’s the most consequential cultural battle won by a conservative since Ronald Reagan chased off the hippies at UC Berkeley in 1969, and ended the counterculture. And like that earlier battle, this victory will silence the lonely band of “true” conservatives who still think that President Trump isn’t really one of them.

With the NFL’s castration, the President has probably turned the tide on corporate America’s shaky love affair with radical politics too. The world of the CEOs will surely take note. Once all the losses are totaled, the NFL’s anthem outrage will go down as the most spectacularly stupid business decision that has ever been made. Not just kinda dumb — but New Coke stupid. Or AOL-Time Warner stupid. Eight percent of the NFL audience disappeared last year, along with more than $500 million in revenue. So many fans stopped going to games that empty seats at empty stadiums became “the thing to meme” on Twitter.

Personally, I don’t think they are ever coming back. Take my father, a coal miner for much of his life, for instance: he will never watch another game as long as he lives. He was the heart and soul of the NFL’s demographic too. With him and pro football, it’s not just a timeout or half-time or something: it’s game over. I don’t know what he will do on his Sunday afternoons now, but he loves President Trump and what he did. He’s probably going to need another pastime. Perhaps the President will invite my dad over to the White House this fall, and they can watch Pamplona’s “Running of the Bulls” together?

Emerald Robinson is the chief White House correspondent for One America News Network. You can follow her on Twitter.