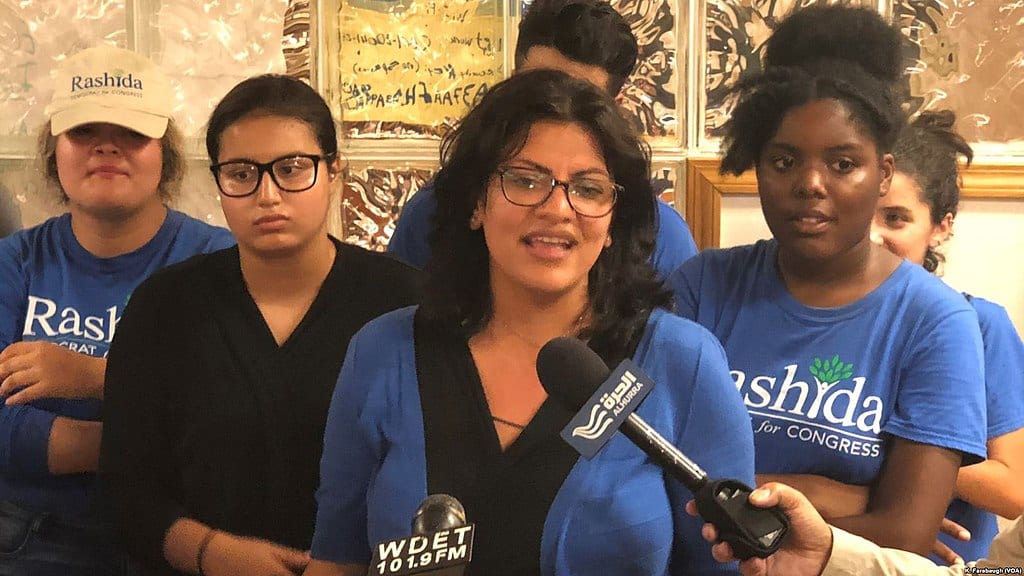 In a recent Nazi outrage, Rashida Tlaib, Democrat Liar of Michigan, stated that the Holocaust has had a “calming” effect on her because the “Palestinians” “welcomed” the Jews into “their” land as a haven from Hitler. The Big Lie — in so many dimensions.

New to the fray, South Bend Mayor Buttigieg — an expert on world affairs though still unable to maintain civil equanimity in his own city where African Americans are furious over a recent police shooting — has announced that, if Israel ever extends sovereignty into any part of Judea or Samaria, he will cut off aid to Israel accordingly if he is elected President. Others on the same bandwagon: Robert O’Rourke, a Scottish-Irish skateboarder best known for break-ins, drunk driving, computer hacking, faking Hispanic heritage, and having his ear hairs cut. Bernie Sanders, an American Communist. What these and their ilk all have in common is that they each see nothing anti-Semitic in anything that Ilhan Abdullahi Omar or Rashida Tlaib has written or spoken, but they are unable to tolerate Jewish life in Judea and Samaria.

Even true friends of Israel in Washington, D.C. like Sen. Lindsey Graham have succumbed to decades of the Biggest Mideast Lie: that there ever was an Arab political entity of “Palestine” or that there ever was a “Palestinian Arab nation.” The dizzying repetition of that Big Lie for so many decades causes even United States Senators and House Representatives who should — and who privately do — know better to speak of “The Two-State Solution.” But that very notion is illogical, absurd, nonsensical. People say it without thinking about it: “The Two-State Solution.” What are they talking about? Given what America intermittently but never-endingly faces in purgatory-hole countries like Afghanistan, Iraq, Iran, Syria, Libya, Lebanon — does it really advance American interests to create yet another Muslimarabstan that will be yet another center for international terror and that ultimately will bog thousands more American troops and billions more in defense spending in yet another Middle East purgatory? Does America really benefit by giving Hamas and Fatah terrorists new countries of their own?

Notice that the danger is so perilous that no one admits that they are speaking of giving the terrorists a “country,” not a “state.” Delaware is a state. North Dakota is a state. But Muslimarabstanpalestine would be a country. That is a solution? And have you ever looked at the map of the region? Gaza is on one side, and Judea-Samaria (the “West Bank) is utterly separate. Those two regions are not one entity. Even now, Gaza is ruled by Hamas terrorists, and the “Palestine Authority” is run by Abu Mazen (aka Mahmoud Abbas) and Fatah terrorists. And they regularly hate and kill each other. So it is not about a “Two State Solution” but a “Three Country Quagmire.”

More: Given that no Muslimarabstan in “Palestine” will allow any single Jew to live there, has anyone given thought to how exactly 450,000 Jews are going to be uprooted from their homes in Judea and Samaria, plus another 325,000 Jews from East Jerusalem? Sure, Adolf Hitler had a way to do it. Is that the American “Two State Solution,” too — to send in storm troopers, round-up and force Jews onto cattle cars, force them into concentration camps? What exactly is the European Union idea for uprooting 775,000 Jews from Judea and Samaria? Oh, and by the way, these Jews are not like the ones in the Holocaust movies. And where exactly will they be re-concentrated? In refugee camps in Syria? Will the European Union ask Germany to restore some of their available facilities, perhaps in Dachau and other picture-postcard locations, although it will cost them the tourist trade of those who love to visit concentration camp museums?

Do you see how none of this “Two State Solution” makes any sense once you actually think beyond a slogan? Now let us look deeper at real facts:

First, the Arabs of pre-state Israel were pro-Hitler Nazis. Their undisputed leader, Haj Amin el-Husseini, the Grand Mufti of Jerusalem, traveled to Berlin and met with Hitler, counseled Hitler and his Nazi leadership, and urged the tertiation of the Jews. As Menachem Begin has stated, the Jews were not decimated by Hitler but tertiated. That is, the Nazis did not murder one Jew in ten but one-third of all European Jewry. The Grand Mufti played a major role in inciting the tertiation of the Jews. Here is the official transcript of the Grand Mufti’s meeting with Hitler on November 28, 1941. Despite Tlaib’s lies and the falsehoods taught in colleges by tenured professors who cannot be fired, these Arab Muslims were not freedom fighters; they were Hitler Nazis. They did not welcome Jews; they helped Hitler murder Jews.

Writing in the November 11, 2015 issue of Ami Magazine, Holocaust historian Dr. Rafael Medoff recounts that the Grand Mufti approached Nazi Germany’s consul-general in Jerusalem, Heinrich Wolff, “salut[ing] the new regime in Germany and hop[ing] for the spread of fascist anti-democratic leadership to other countries.” The Mufti helped organize an Arab Legion to fight in the Nazi German army, and he created an all-Muslim division of the SS that perpetrated so many atrocities that the Grand Mufti later was indicted for War Crimes. Eichmann testified at his war crimes trial that several Mufti staff members were stationed in Eichmann’s office to gain expertise in starting a Gestapo in the Mideast. The Arab Muslim infatuation with Hitler Nazism continued after WWII, as thousands of Nazi War Criminals found safe haven in those countries. SS Lt. Alois Brunner and SS Capt. Theodor Dannecker in Syria and Gestapo Col. Leopold Gleim in Egypt were among the more prominent of the thousands who received Nazi Sanctuary in the Muslim Arab world. Id. at 76-80.

Rashida Tlaib is a fork-tongued liar. Moreover, any of her Democrat Left defenders who say she was taken out of context also is a liar. And anyone who says she has been misunderstood is a liar. Her entire Big Lie paradigm is constructed on yet an even bigger underlying lie: The Myth of “The Palestinians.”

The entire “Palestine” myth is built on one Big Lie after another. Recently, the New York Times even published an article asserting that Jesus was a “Palestinian Arab.” Having spread the Big Lie for so long — half a century — having defrauded so many gullible people and a new generation of campus ignoramuses to believe the Big Lie that there ever was an Arab country called “Palestine” and the concomitant Big Lie that there ever was an ancient Arab people called “The Palestinians,” they now have moved to the next phase: that Jesus was one.

Let the Myth and Fraud of “Palestine” and the Lie of “The Palestinians” be set straight.

Roman conquerors under Vespasian and Titus destroyed the Holy Temple in the year 70, and the Romans drove most of the remaining Jews out of Israel in the year 135 under Hadrian and Julius Severus with the fall of Fortress Betar. To extinguish the Jewish bond with the land for all forthcoming eternity, and to prevent yet another Jewish return to Israel from Exile as had happened only seventy years after the Babylonian expulsion of 586 B.C.E., the Romans changed the very name of the land to identify it with the pagan Biblical peoples who preceded the Jews there before Joshua: the Philistines (“Plishtim,” in Biblical Hebrew). That is where the name “Palestine” comes from: Rome naming the conquered land for the Plishtim, the Philistines of the time of Joshua and Samson and King Saul. And the Philistines clung to the Gaza-Ashkelon corridor along the Mediterranean coast, utterly irrelevant to the Judea-Samaria (“West Bank”) heartland. There were no Arab Muslims in the Bible. You want a citation to prove it? OK, open any Bible. Every sentence proves it. Indeed, there was no Islam until Mohammed half a millennium later in the Seventh Century.

For the two thousand years after the Romans renamed Israel, the land of “Palestine” was synonymous with the Land of Israel. There never were a “Palestinian Arab” nation; no Arabs denominated themselves “The Palestinians.” They staked no claims. There never was an Arab political entity called “Palestine.” Open an Encyclopedia pre-dating 1964, and look up “Palestine.” Identify the name of any Arab Muslim who ever was the “King of Palestine,” the “Sheikh of Palestine,” the “Emperor of Palestine,” the “Prime Minister of Palestine,” the “President of Palestine.” Name a “Palestinian” painter of note, a thinker, a poet, a soccer team. There never was an Arab anything called “Palestine” and never an Arab people by such name. Any statement otherwise is a lie and a fraud on society that easily can be fooled when mass media decide to cooperate and partner in the Big Lie. Go ahead and Google their historic bond, their claim of predating the Jews in Israel. Nothing before the 1920s. They claim there never was a Jewish Holy Temple on Mount Zion. Open your Jewish Bible. I Kings 6-7. Look in the Christian Bible: Matthew 21. Luke 2. John 2. Yet today’s Grand Mufti of Jerusalem preaches that there never was a Jewish temple in Jerusalem. Abu Mazen (aka Mahmoud Abbas), Holocaust Denier and leader of the Palestine Authority, likewise denies all such history. That Big Lie not only negates Judaism but also Christianity’s core narrative of the life of Jesus.

And the irony of their Holocaust denial and Jerusalem Temple denial is that there never was an Arab country or people called “Palestine.”