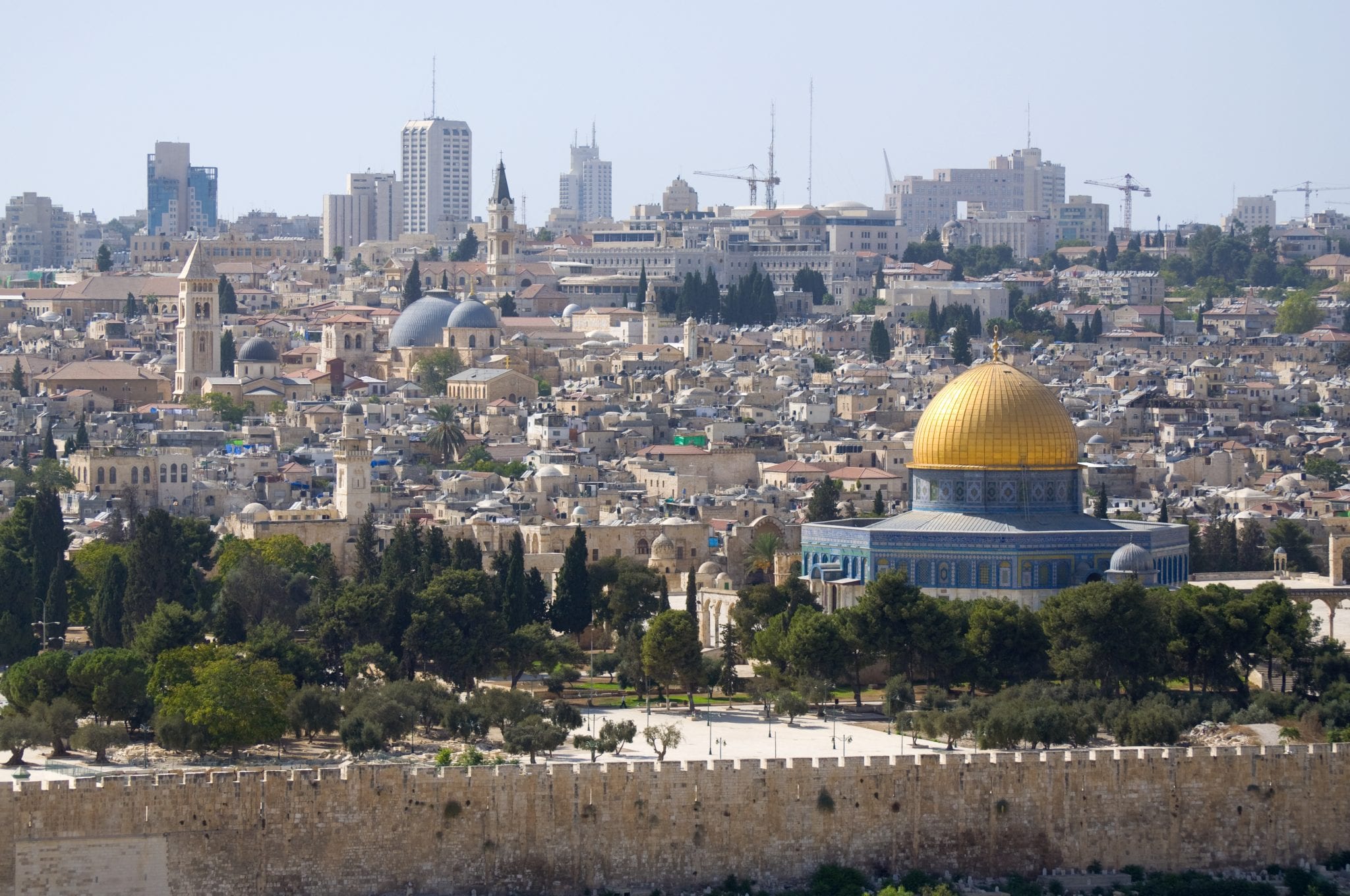 As noted in the prior installment, the entire “Palestine” myth is built on one Big Lie after another. Recently, the New York Times even published an article asserting that Jesus was a “Palestinian Arab.” Having spread the Big Lie for so long — half a century — having defrauded so many gullible people and a new generation of campus ignoramuses to believe the Big Lie that there ever was any Arab country called “Palestine” and the concomitant Big Lie that there ever was an ancient Arab people called “The Palestinians,” they now have moved to the next phase: that Jesus supposedly was one.

Roman conquerors under Vespasian and Titus destroyed the Holy Temple in the year 70, and the Romans drove most of the remaining Jews out of Israel in the year 135 under Hadrian and Julius Severus with the fall of Fortress Betar. To extinguish the Jewish bond with the land for all forthcoming eternity, and to prevent yet another Jewish return to Israel from Exile as had happened only seventy years after the Babylonian expulsion of 586 B.C., the Romans changed th every name of the land to identify it with the pagan Biblical peoples who preceded the Jews there before Joshua: the Philistines (“Plishtim,” in Biblical Hebrew). That is where the name “Palestine” comes from: Not Arabs bearing a name — but Rome renaming the conquered Land of Israel for the Plishtim, the Philistines of the time of Joshua and Samson and King Saul. Those Biblical Philistines clung to the Gaza-Ashkelon corridor along the Mediterranean coast, utterly irrelevant to the Judea-Samaria (“West Bank”) heartland. There were no Arab Muslims in the Bible. Indeed, there was no Islam until Mohammed half a millennium later in the Seventh Century.

“Palestine” always meant “Israel.” The American organization that raised money for the Irgun — the Jewish underground that fought alongside the Haganah when England would not allow Jewish refugees from Hitler, fleeing desperately on ships like “The Exodus” to find sanctuary in Israel — was the “American League for a Free Palestine.” The English-language Jewish daily newspaper in Israel before the State of Israel was established in 1948 was the “Palestine Post.” The United Jewish Appeal before 1948 was the United Palestine Appeal. Indeed, Encyclopedia Britannica’s entry on Rabbi Abraham Isaac Kook, the first Chief Rabbi of Israel, titles him the “Chief Rabbi of Palestine.”

Until 1964, Arabs never undertook to establish a “Palestine” in either Judea-Samaria (the “West Bank”) or in Gaza — even though they controlled both regions for two decades from 1948-1967 (Jordan illegally occupying Judea-Samaria and Egypt illegally holding Gaza). When the “Palestine Liberation Organization” was fabricated by Ahmed Shukairy in 1964, the “Palestine” they wanted to “liberate” was the entire country of Israel. No PLO attacks aimed at “liberating” Gaza or the “West Bank.” All PLO terror attacks from their 1964 founding and until 1967 were aimed exclusively at sites within Israeli cities. Only after Egypt, Syria, and Jordan allied for war in 1967 to drive the Jews into the Mediterranean Sea did a new revamped “Palestine Myth” emerge. Israel emerged from that June 1967 war liberating East Jerusalem, the Golan Heights, the rest of Judea and Samaria, and Gaza. Only then — suddenly — did the “Palestine” myth change: Now the PLO wanted Judea and Samaria (the “West Bank”) and Gaza. Suddenly, that was “Palestine.”

Ask yourself: Why do the Arabs call Judea and Samaria the “West Bank”? Do people call Jersey City or Hoboken or Secaucus the “West Bank” even though those cities lie on the west bank of the Hudson River? Why call Jewish cities in Judea and Samaria the “West Bank” when they are nowhere near the Jordan River? Answer: Because, through all of Arab history, Arabs never had any name for the region because it was not theirs. They had names for Egypt, for Lebanon, but no name for Judea and Samaria. And yet they would sound laughable, even to Democrat Left ignoramuses who boycott Israel, if they were to proclaim:“Judea belongs to Arabs because there never were Jews in Judea.” Even they cannot lie that baldly. “Judea” (“Yehudah” in the original Biblical Hebrew) is eponymously named for the Jewish tribe of Judah (likewise “Yehudah”), the tribe of David and Solomon, that was apportioned that region by Joshua. Christians find that Luke 17:11 discusses Jesus in Samaria and that John 4:1-4 discusses Jesus going from Judea to the Galilee by way of Samaria. Nowhere in the Jewish Bible nor in the Christian Bible is the region, the very heartland of Israel, called “West Bank.” That name is utter nonsense. So the Arabs call it “The West Bank.” Think about it: All the rest of the region is known by Biblical names: Lebanon, Tyre, Sidon, Damascus, Hebron, Bethlehem, Galilee, Beersheba, Jerusalem. Yet, after all the millennia, they never had reason to name Judea and Samaria.

“One picture is worth a thousand words.” The Al Fatah flag of the PLO of Abu Mazen (Mahmoud Abbas) of the “Palestine Authority” depicts the “Palestine” they seek: the entire State of Israel. Same with the flag of Hamas. Also the flag of the Popular Front for the Liberation of Palestine. And of their “General Command.” Likewise the flag of Islamic Jihad. Each flag depicts their definition of “Palestine”: not a country comprised of “West Bank” and Gaza. Rather, the entirety of Israel. That is what they mean when they chant: “Long Live the Intifada” and “From the [Jordan] River to the [Mediterranean] Sea / ‘Palestine’ Will Be Free.” It has been the dream of Nazis from Adolf Hitler to the Grand Mufti of Jerusalem and now to their new Democrat cohort of Ilhan Omar, Rashida Tlaib, and their ilk: an Israel free of Jews — and of Christians — once again. After two thousand years of driving Jews out of European countries and yelling “Go to Israel!” now they would declare Judea and Samaria as the one place on earth barred to Jewish residence. The arrogance: Ilhan Omar of Somalia has a right to live in Minnesota with all her husbands, but Jews have no right to live in Judea?

Facts remain facts. Jews, Catholics, and Protestants all have access to Biblical narratives that tell a profound truth: There never ever was an Arab country called “Palestine,” and there never ever were an Arab people who called themselves “The Palestinians” until the past century. Their claims are bogus. Their lies are brazen. Brazen, even as they have used $360 million per year of American tax dollars and European Union grants to send monthly cash-bonus stipends-for-life to families and relatives of convicted terrorists, like the one who murdered American military hero and Vanderbilt University MBA student Taylor Force, while he was touring Israel.

In foreseeable time, the Israeli Government finally will extend sovereignty over Jewish communities in Judea and Samaria, just as it did in East Jerusalem and in the Golan Heights. There now are 325,000 Jews living in East Jerusalem in Judea, and another 450,000 Jews living throughout communities in the rest of Judea and Samaria. Those who echo mindless tropes about a “Two State Solution” have absolutely no idea what they are talking about and how preposterous the notion is. Iowa is a state. New Hampshire is a state. Mahmoud Abbas and Hamas each would be getting a Terror Country — and their two territorial entities have no connection with each other; they hate each other. No one is going to uproot and displace nearly a million Jews from their homes in cities throughout Judea and Samaria. To remove Jews from Hebron, where Abraham, Sarah, Isaac, Rebecca, Jacob, and Leah repose? From the region where Rachel’s Tomb stands? To ethnically cleanse Jews out of the regions where Isaiah, Amos, Jeremiah, and Ezekiel prophesied? Absurd.

The first zone ripe for reunification into Israel is the region in Judea and Samaria known as “Area C.” That area comprises 61% of Judea and Samaria, not counting Jerusalem, and — despite the endless Fake News that falsifies demographics — “Area C” of the “West Bank” has a clear majority Jewish population. Israel should have extended sovereignty over “Area C” fifty years ago, when she did so over East Jerusalem and the Golan. Better late than never. The United Nations, the European Union, the Arab and Muslim World, and the Russia-China-North Korea Axis will oppose it. And that is the beauty of Israel having been the target of their one-sided, viciously unfair and biased attacks for more than seventy years: Israelis and those who support Israel throughout the world learned decades ago to tune out the condemnations as so much static. It is every bit as easy to tune out Bernie the Communist, Ilhan the Jew-Hater, Rashida the Fraudster, Robert O’Rourke the computer-hacking, drunk-driving, Hispanic Impostor, and the rest of them.

Get ready for Israeli sovereignty in Area C. Coming soon.