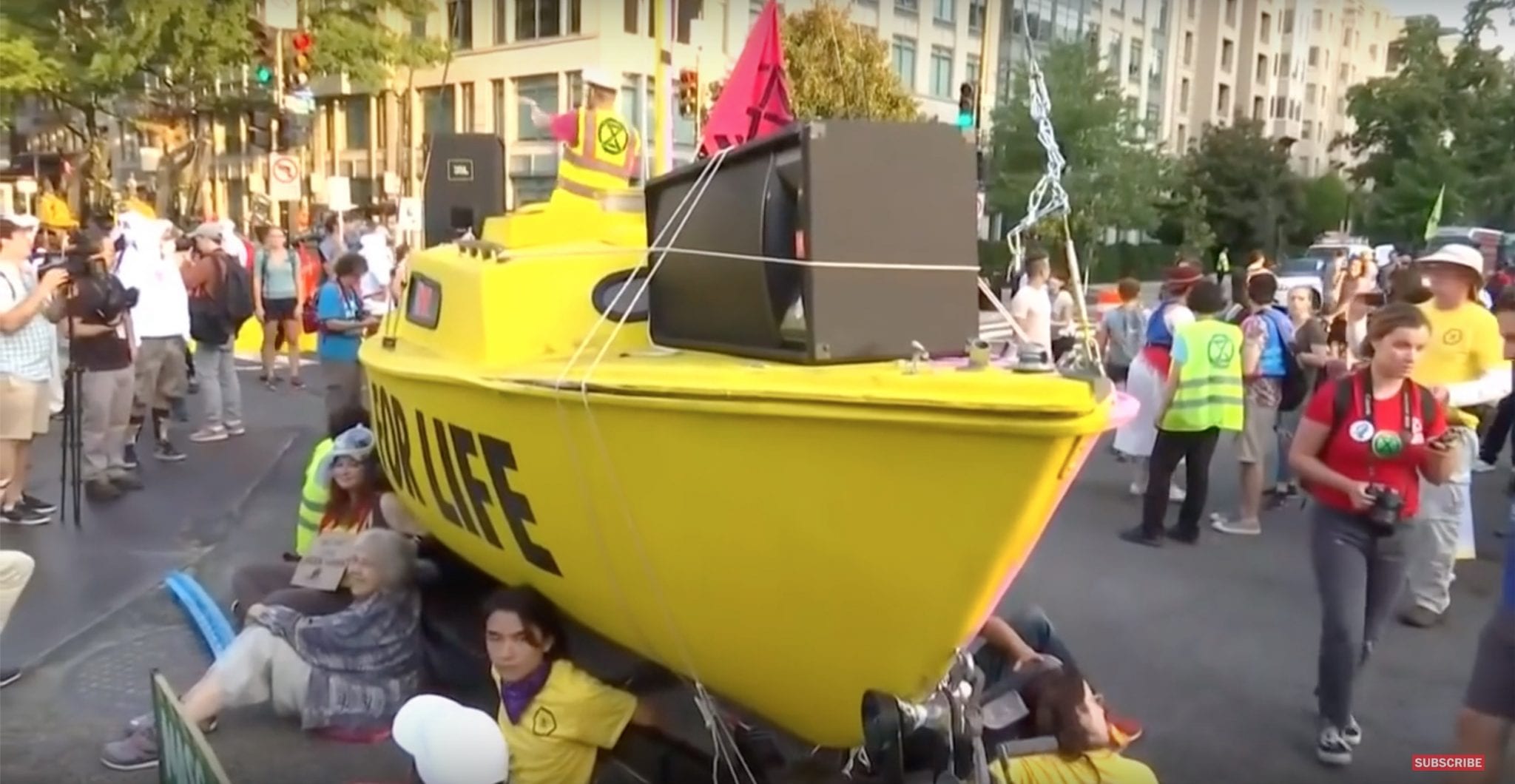 Like swallows to Capistrano, last Monday the loons returned to Washington; as usual, they arrived from the left. Ostensibly, their purpose was to raise awareness of climate change. In reality, it provided further evidence of how far the Left has migrated from reality.

On September 23, a loose coalition of 14 environmental and social justice groups operating under the name “Shut Down DC” descended to accomplish their goal. On their website they stated, “We will block key infrastructure to stop business-as-usual, bringing the whole city to a gridlocked standstill.”

Spokesman Mike Golash said, “We hope with by our actions on Monday, we can raise public awareness on this issue and understand it’s just not going to be taken as business as usual, that we need some drastic action on climate change issues in the near future.”

There is irony bordering on the sublime that in a city known for its political gridlock, protesters intended to bring physical gridlock in order to break through that political gridlock. It would be like bringing coals to Newcastle, except that the activists would need to find a non-carbon-emitting replacement.

Civil disobedience was not the protest’s byproduct; it was the purpose. Event organizer Kathleen Brophy said, “We will not have permits. We will be engaging in civil disobedience. We are withholding our obedience from a system we do not agree with.”

The protest coincided with the Climate Action Summit at the United Nations General Assembly. Of course, that was in New York City, 225 miles to the north — a four-hour drive away, and considerably longer if you walk or bike instead.

According to organizers, as many as 2,000 took part in blocking 22 intersections. There were 26 arrests. By noon, the “gridlocked standstill” was over.

According to one organizer, “People of power are going to deal with the disruption, too.” How many “people of power” actually did was unclear.

The president was in New York (one person “of power”). The House of Representatives (435 “people of power”) was not in session. Finally, the Senate (another 100 “people of power”) did not have votes until late afternoon — hours after the protest ended.

This is not to say that people, regardless of their power attributes, did not have to “deal with the disruption.” They did. Rhey were, however, “people without power” — at least as far as it went in regards to avoiding the traffic jams.

So there they sat in their cars. Idling their engines. Burning gas. For hours. As a result of a protest to stop global warming.

If the immediate result of the protesters’ effort was at best mixed, their methods for inflicting gridlock varied even more. Protesters sat in crosswalks (or “cross-sits” for a few hours) with signs. The more artistic danced and played drums. The less creative held banners — “Which side are you on?” — or passed out leaflets. One man, wearing a child’s plush toy hat (of undetermined animal likeness), placed a ladder in the street and climbed it. The most visible — and assuredly the most nautical — obstruction was a large pink and yellow sailboat towed into an intersection and crewed by protesters who chained themselves to it. Emblazoned “Rebel for Life,” this cruise over concrete presumably one-upped Swedish climate activist Greta Thunberg, whose zero-emission sailboat traversed only the waters of the Atlantic. A crewmember said, “We put up a roadblock to disrupt business as usual.”

If there was one thing about the protest that was less than mixed, it was its reception. While one sailboat crewmember described her voyage into D.C. as “pretty fun, honestly,” the protest was decidedly less so for those it impeded.

Many unintended “people without power” were “stood still” by the standstill. Probably most were unhappy about it. This also likely included many who were actually sympathetic to addressing climate change.

In a town based on lobbying to get “people of power” to listen to their concerns and then act sympathetically on them, alienating people and making them angry is a novel approach. Of course, that is because it is a counterproductive one.

Even protest participants questioned its productive impact. Azani Creeks said, “I don’t think this action will convince people one way or another, but at least they’ll know that we care and are doing something about it.” Even if that “something” is counterproductive.

Looking back on the protest, it is impossible to escape the obvious: Its means were dubious (if not counterproductive); it missed its ostensible targets (“people of power”); it hit hardest the people who organizers ostensibly were intending to help (“people without power”); its short-term result was the opposite of its long-term goal (masses of vehicles expending excessive emissions waiting for the protest to end); and its long-term result made few (if any) more receptive to the cause (and many possibly less so). All in all, this lobbying-in-reverse exercise was not a good morning’s work if judged by rational standards.

Yet if the protest failed on all fronts — except raising the protesters’ smugness to potentially dangerous levels — it did unwittingly accomplish something valuable. It was an eloquent reminder of the Left’s inanity and ineptitude.

Start first with the media. Not only did its coverage of the protest not accentuate any of its numerous failures and outright contradictions but also virtually none of it bothered to cover any of the people affected by it — despite the fact that affecting people was the reason behind the protest.

On the other side, there was no shortage of coverage of the protesters themselves. This allowed the protesters ample additional opportunity to disseminate more of their muddled message.

Yet despite there being a far greater number of people affected by the protests than participated in it, they had effectively no voice.

The reason for this biased coverage is perfectly clear. The media is sympathetic to the protesters’ goals and was uninterested in doing anything to undermine them by covering the protest objectively. So, they simply ignored the rest — and actually the larger part — of the story. Without inconvenienced people, there was no effect — and hence, no story.

When the Weather Channel covered Dorian, it did not interview the hurricane. What goes for natural disasters should apply to unnatural ones too.

The Left’s failures are hardly limited to the environment, though. Name the issue, attach the Left to it, and you know the outcome. The Left’s policies only appear to work when subsidized by others. When the subsidies run out, the Left’s policies grind to a halt.

“Shut Down DC” was not about the climate, changing or otherwise. It was about the Left, which is decidedly unchanging. The sole productive outcome of the shutdown was to serve as a reminder of its failure.