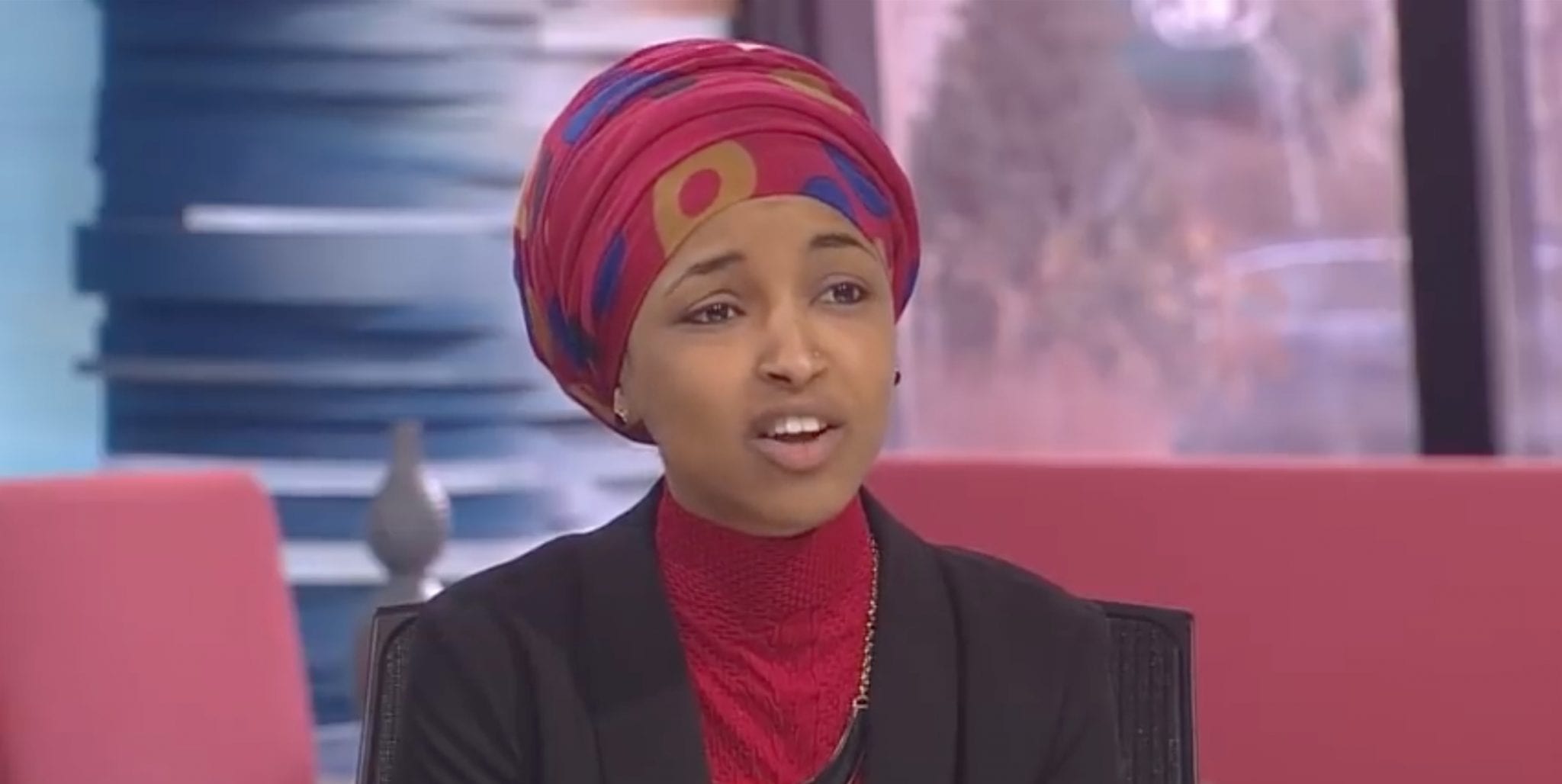 Omar was scolded by House Speaker Nancy Pelosi and several other House Democrats. But noticeably, as this is written, she has not been stripped of her committee assignments or disciplined by the Democratic House leadership. The comparison to the GOP treatment of Iowa’s Rep. Steve King, who made remarks interpreted as support for white supremacy and was not only condemned by the GOP leadership but stripped of his committee assignments could not be more stark.

But there is more — much more — to this rise in anti-Semitism than Congresswoman Omar’s anti-Semitic tweets. The hard fact is that anti-Semitism is metastasizing across the American Left, and has been for years.

Recall that in 2015 Mark Levin made a point on his radio show of calling out anti-Semitism in the Obama White House, saying this:

I think it’s time for a national discussion about Barack Obama and his administration and the stench of anti-Semitism that’s in this White House….

There’s been a relentless attack on Benjamin Netanyahu hatched from the Oval Office.… We don’t have a media in this country, we have propagandists. There’s a few journalists who stand out but that’s not “the media” that’s a few journalists. And that’s what we have and they repeat what Obama tells them to repeat… that’s why I call them the praetorian guard media. Obama has a hate on for Netanyahu, he has a hate on for Israel. And I firmly believe he’s anti-Semitic. What other person would hang around with a Jeremiah Wright, a Rashid Khalidi… an Al Sharpton? Would reach out to the Muslim Brotherhood and bring them into the Oval Office, reach out to this group CAIR and bring them into the administration in various capacities? What kind of president would treat the Islamo-Nazi regimes with kid gloves, as a matter of fact in the case of Iran negotiate with them, beg them, bend over backwards for a deal. Israel sees Obama’s handiwork in the Middle East.

Later, interviewed by Sean Hannity on the Hannity television show, Mark added this:

The fact of the matter is, Sean, I want to say this and this is important. Eric Holder said that this nation is full of cowards because we won’t have a discussion about race. Well, I think this nation needs to have a discussion about what’s going on in this White House and this administration about anti-Semitism. Because this White House and it’s reaching out to Sharpton, the Muslim Brotherhood, CAIR, all these radical nut jobs and groups, their policies which are — it’s not just Netanyahu. They’re willing to throw Israel over the side for the Islam regime in Tehran.

Exactly. It is a serious mistake to think of Omar’s tweets as some kind of accidental one-off mistake. Aside from the examples of anti-Semitism provided by Mark Levin there are others.

Vanessa Wruble, a Brooklyn-based activist, said she told the group that her Jewish heritage inspired her to try to help repair the world. But she said the conversation took a turn when Tamika Mallory, a black gun control activist, and Carmen Perez, a Latina criminal justice reform activist, replied that Jews needed to confront their own role in racism.

The women who gathered that night would go on to organize one of the biggest protests in American history, remarkable not just for its size, but for its inclusive nature. The event on Jan. 21, 2017, inspired thousands of women who had never been involved in politics before to pour their energy into helping Democrats win elections this fall.

But the divisions apparent at that very first meeting continue to haunt the Women’s March organization, as charges of anti-Semitism are now roiling the movement and overshadowing plans for more marches next month.

Shortly before this story appeared in the Times, Teresa Shook, the Founder of the Women’s March, took to Facebook to say this:

Bob Bland, Tamika Mallory, Linda Sarsour and Carmen Perez of Women’s March, Inc. have steered the Movement away from its true course. I have waited, hoping they would right the ship. But they have not. In opposition to our Unity Principles, they have allowed anti-Semitism, anti- LBGTQIA sentiment and hateful, racist rhetoric to become a part of the platform by their refusal to separate themselves from groups that espouse these racist, hateful beliefs. I call for the current Co-Chairs to step down and to let others lead who can restore faith in the Movement and its original intent.

And — no surprise — who rallied to Omar’s defense in recent days? Here’s this from Mediaite:

Sarsour, of course, has herself been repeatedly accused of anti-Semitism.

Then there’s America’s left-leaning college campuses. Ben Shapiro’s Truth Revolt has delved into the rising tide of anti-Semitism, listing The 10 Campuses With The Worst Anti-Semitic Activity. They are:

The activities range from professors harassing Jewish students to hosting speakers who oppose the existence of Israel to using force to intimidate Jewish students and more. Much more.

All of which is to say, the blatant anti-Semitism now coming out of the newest leftist members of the House is not some sort of one off or accident. Ilhan Omar is at the very center of the left’s culture of anti-Semitism, as is her colleague from Detroit, Rashida Tlaib. In the case of the latter Tlaib, here’s a New York Post headline from January:

Freshman Rep. Rashida Tlaib may take great pains to deny she is anti-Semitic, but she’s just launched her congressional career by resorting to one of the oldest and most blatantly anti-Jewish canards.

At issue is a bill that aims to limit the anti-Israel Boycott, Divestment and Sanctions campaign. Tlaib, the first Palestinian-American in Congress, accused the measure’s supporters of dual loyalty.

“They forgot what country they represent,” the Michigan Democrat and unapologetic BDS supporter tweeted.

Over at Commentary Abe Greenwald had an excellent piece on Omar’s “apology” titled “Apology Unaccepted,” in which he writes:

Asking for an apology is an immoral response to anti-Semitism because it’s designed to allow the anti-Semite to move past her offense. In the public sphere, these apologies become a licensing fee paid by people like Omar every time they want to sound off about the evil Jews. She “apologizes,” people praise her willingness to learn and grow, and the headlines shift from her offense to the hysterics who won’t let her be. The only ones who benefit here are the bigots and their allies. In the case of Omar, those allies are either her fellow Democrats trying to do damage control or anti-Semites who are thrilled to see one of their own successfully playing the game.

Here at The American Spectator, Dov Fischer had an excellent piece that cut to the heart of the matter. The headline:

With the Rise of Democrat Identity Politics, More Jew-Haters Will Continue Seeping Through the Cracks

It was thorough and spot on. (The only thing I disagreed with was his inclusion of Van Jones as an anti-Semite. I know Van Jones well from CNN days. Never once did I hear a single word from him that even came close to resembling anti-Semitism. This is someone, after all, who formed a partnership with senior Trump adviser Jared Kushner — who is Jewish — to work on criminal justice reform. Van may be on the Left, but anti-Semitic he is not.)

In short? Anti-Semitism is well on the rise on the American Left. It isn’t one or two lone new congresswomen. And yes — no matter where it comes from — it needs to be called out. Pronto.