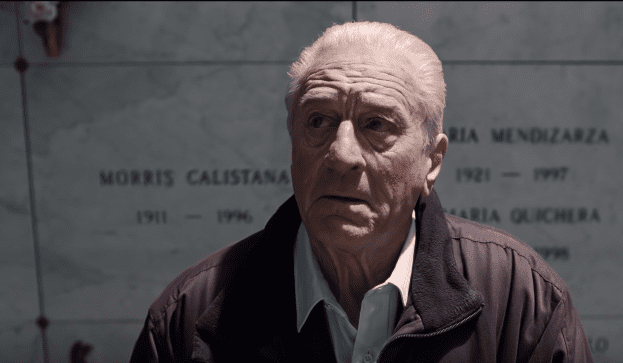 What happens when the man who sold his soul doesn’t die an extravagant, boisterous death driven by some ironic twist of fate?

According to Martin Scorsese’s new film The Irishman, it looks something like a lonely old man, a big gold ring, and a lifetime of stories that nobody cares about.

This late into his career, Scorsese is too old to be writing mobster wish-fulfillment stories or shooting the bombastic and indulgent murder scenes of Goodfellas and Casino — and clearly he knows this.

While the bacchanalian insanity of The Wolf of Wall Street, released in 2013, has had the highest gross returns for any Scorsese film, he has nestled around it more subdued and internally aimed films that are big hits with audiences, even if they don’t have the same spectacular appeal.

Hugo, a 3D animated family adventure film released in 2011, was Scorsese’s love letter to the art of cinema and a reflection on the wonders the big screen brought him in his own childhood. Silence, the Japanese historical epic released in 2016, was a punishing and soul-baring meditation on Scorsese’s own religion, Roman Catholicism, that asked larger-than-life questions about God’s role in helping those punished for their worship.

The Irishman moves fluidly between the cinematically opulent and the introspective, due in no small part to its presentation.

Scorsese didn’t make The Irishman for Netflix. But perhaps he got luckier than any of us realize in having it streamed there. The lengthy runtime and constant emotional danger keep you on the edge of your seat. Watching in your living room and having access to the powers of a remote control, you can absorb quite a bit on even one viewing.

While watching, I paused the movie on at least a dozen instances. Sometimes it was to stop and think about the details that I wasn’t quite understanding. Another time I just needed to go to the bathroom. (Remember, three and a half hours.) Other times I rewound to watch a scene again after a major twist.

Contracted murder, revenge killings, political assassinations — they’re all in there. In fact, there’s more or less the same amount of violence as in his previous films about organized crime.

But the muzzle flashes feel duller, and the blood splatters don’t feel as fun. The movie repeatedly spends huge stretches of time building up to a murder: We follow the killer, see his stress about what could go wrong, examine the surroundings, follow the process over the shoulder or tracked down a sidewalk, and then — bam bam — the person’s speech trails off and a lifeless body falls to the ground in an unpleasant heap as the shooter scurries away. No sharp piano notes, no close-ups of anguish.

The story centers around Frank “The Irishman” Sheeran, notorious hitman for the Bufalino crime family and muscle for the American labor union during Jimmy Hoffa’s heyday.

By the time the movie opens, Sheeran is an old and crippled man in a Catholic nursing home outside of Philadelphia. The story we watch is layered. For the majority of it, there are three levels to the narrative: the present, a flashback, and a flashback from within the flashback.

Scorsese shows us, spread across the film’s staggering runtime, Sheeran’s descent into a closed loop of power, fear, and murder.

Sheeran begins his fall by simply skimming steaks off the top of the meat truck he drives. Before long, he’s “painting houses,” the contemporary euphemism for contract killing, and eventually being moved as a soldier in an internal conflict that leads him to point the gun at his closest friends and associates.

At the end, the audience is left to ask, “What did these three-and-a-half hours of ugly, unspectacular violence amount to?”

All the friends that Sheeran has killed, all the cohorts that he went to jail to protect — they’re all dead. Not just dead: they all slipped out of his life unceremoniously, dying of cancer in old age or croaking after being wheeled around in a chair, dentures replacing their teeth.

As Sheeran tells us towards the end of the film:

Russell, he had a stroke. Fat Tony, he couldn’t control his urine no more. And my arthritis, that started in the foxholes of Anzio, was eating away at my lower back now, and I couldn’t feel much in my feet no more. I needed a cane. But, you know, they’re not going to give you a cane in the can because they say you’re going to use it as a weapon. There was this medicine, Neurontin, it helped me a little bit, but it also made you loopy. We were all falling apart right there in the freezing f—ing cold.

Such an intimate and painful portrait can be hard to watch at times. Listening to Sheeran can give the audience the feeling that they’re at a grandparent’s deathbed.

Due to the limited and prohibitively exclusive release of the movie in theaters, most viewers have only seen the film on the small screen. But in that department, it’s doing better than anyone could have expected.

Ted Sarandos, content chief at Netflix, has confirmed that in its first week alone, The Irishman has been seen by 24.6 million people. That number isn’t inflated by misclicks or people who only watched a few minutes before shutting it off, either — that’s people who watched at least 70 percent of the film.

For me, those pauses are, in the case of a movie as monumental in scope as this, a positive, not a negative. This is a man’s life story, expertly told by one of the world’s most acclaimed directors and a star-studded cast.

Pausing, thinking, and rewinding all put the viewer in the seat of the unseen interviewer Sheeran is telling his story to in the nursing home — stopping him, asking for clarification, urging him to tell that part again.

With a movie as dense as this, Netflix lets the audience take in everything they can.

Timothy Nerozzi is Japan correspondent for the Catholic News Agency.