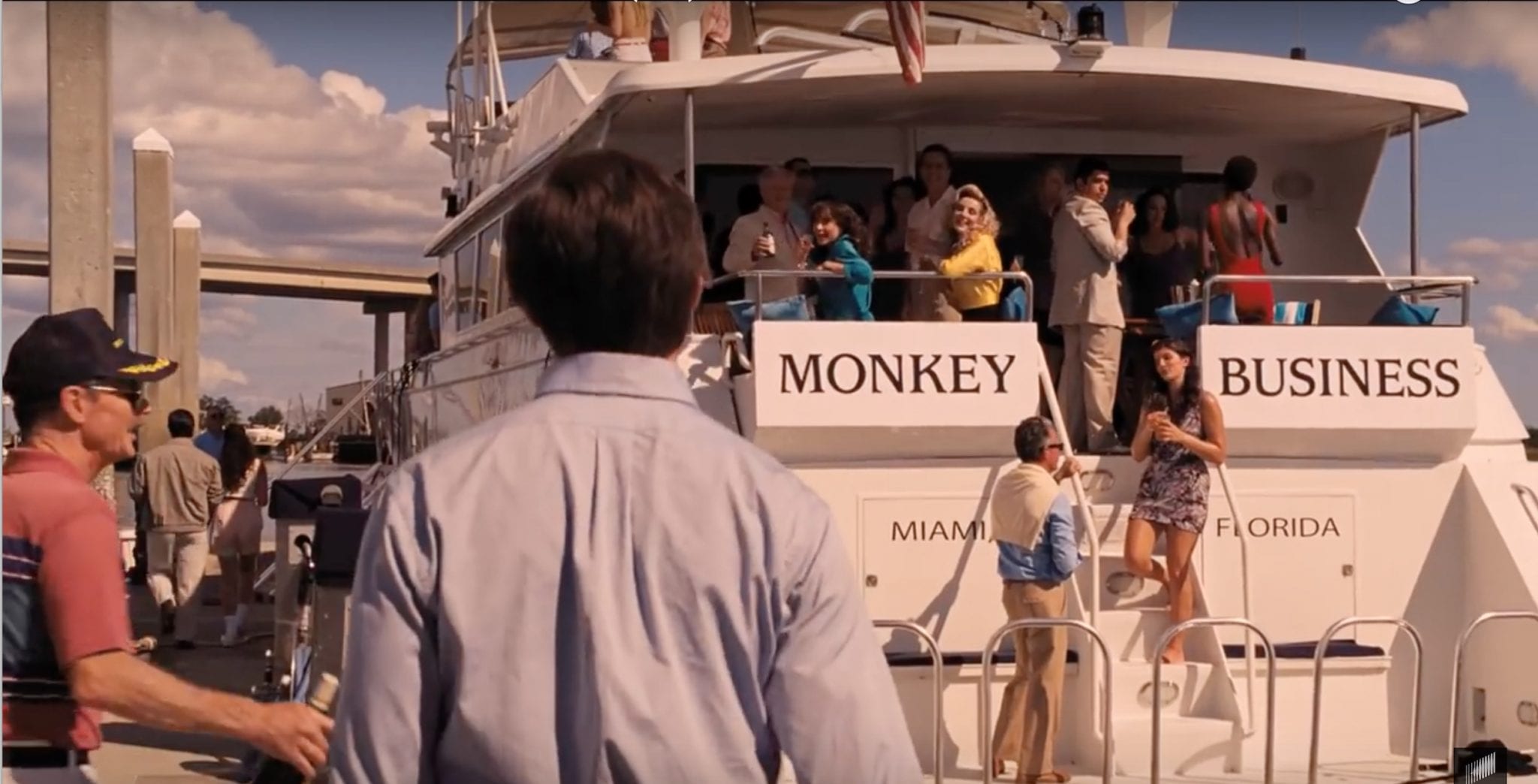 I half expected to enjoy The Front Runner. The new movie about the decline and fall of flash-in-the-pan Democratic candidate Gary Hart was rife with opportunity: a handsome, charismatic young liberal getting ready to challenge the bland middle-aged Establishment Vice President after an exhaustive eight years of seismic domestic, cultural and geopolitical shift, the classical price for hubris, Hollywood celebrity cozying, a national sex scandal with a gorgeous swimsuit model in a sub-tropical setting, the last hurrah for newspaper dominance and gumshoe reporting, all happening in the vibrant Eighties. Other than a couple of Miami Vice references as the Miami Herald investigates Hart, little of this is in the movie. What remains is a dark, dull, dreary tale that even Hugh Jackman can’t enliven. But for just one memorable minute, Johnny Carson does.

A real clip from The Tonight Show is not only the lone funny moment in the entire picture, it provides a jarring culture shock between then and now. Carson ruled late night television until right before the explosion of cable alternatives. Around 30-million people regularly tuned in to laugh at his barbs about both political sides, a far cry from the invariable, relentless, divisive conservative bashing of today. In the snippet shown in The Front Runner, Carson mocks the ironic name of the yacht carrying Hart and his young mistress, Donna Rice, into scandal — the “Monkey Business.” “We don’t know what went on in that boat,” says Carson, “but the whales were watching them.”

The rest of the film alternates between Jackman’s oddly moribund — even pre-scandal — Hart, and desolate semi-conspiratorial scenes of top journalists at the Washington Post and Miami Herald weighing the potential story. It’s like the depressing last third of Citizen Kane minus Charles Foster Kane’s upbeat, idyllic, and doomed rise. A smarter screenplay — such as by the late, great William Goldman, who cinematized the ultimate newspaper-driven true story, All the President’s Men — would have mined the full richness of this tale, and the unique magic of its era.

I was a journalist myself in the Eighties, including at the Washington Post during the first Hart candidacy, and even back then I knew it was the best of times. Everything came together economically, culturally, and geopolitically. Innovative, brilliant new wave music rocked the world, not only audially but visually with the appearance of MTV, which today is both unwatchable and unmusical. Movie-wise, in a single year, 1982, I saw E.T. the Extra-Terrestrial, Gandhi, Blade Runner, Fast Times at Ridgemont High, The Thing, Conan the Barbarian, First Blood, Diner, Star Trek II: The Wrath of Khan, The Year of Living Dangerously, Rocky III, The Verdict, and other classics that modern intersectional Hollywood couldn’t buy or make. And three of the greatest leaders of the 20th century — Ronald Reagan, Margaret Thatcher, and Pope John II — providentially in power at the very same time, united to defeat the world’s longest, mightiest threat.

Progressives still try to diminish the triumvirate’s contribution to this outcome, instead crediting desperate ex-KGB agent and devout communist Gorbachev. Just last week, a beautiful sharp lawyer I’ve known and loved since my Post days said the Soviet Union would have imploded on its own. A mountain of intelligence suggests otherwise.

I was there the night it all started, on November 4, 1980, the most electric, overpowering, premonitive experience of my life. As a young WTTG’s 10 O’Clock News intern, I got sent to help cover Election Night at Republican National Headquarters in Washington. A huge state-by-state U.S. map hung on the wall — and tension on the many faces expecting a long, suspenseful evening. Then the electric map pinged as an eastern state lit up red. In minutes, a dozen more did, soon followed by a dozen more, and ultimately 44 of them were covered in red. Smiles became grins, and gasps became screams of joy. And I knew, after three years of malaise, that the world had suddenly changed for the better.

I also sadly recognized the precise moment it all ended, during Campaign 1988, so anemically depicted in The Front Runner with any ’80s atmosphere replaced by pretentious gloom and melodrama. It was George H Bush’s acceptance speech at the Republican Convention in New Orleans. “This is America,” Bush said. “A brilliant diversity spread like stars, like a thousand points of light in a broad and peaceful sky.” “What the hell?!” I said. “I hope to stand for a new harmony, a greater tolerance,” Bush continued. “And we’ve got to leave that old tired baggage of bigotry behind.” “Good platform,” I said, rolling my eyes. “Every time I hear that someone has breached the public trust,” said Bush, “It breaks my heart.” “But not the Soviet Union,” I said. Then came the nail in the Reagan Era’s coffin. “I want a kinder and gentler nation,” Bush said. “Kinder and gentler than whom?” Nancy Reagan said to her husband, according to Bret Baier’s superb book, Three Days in Moscow: Ronald Reagan and the Fall of the Soviet Empire.

Bush never got his wish, or a second term. Now 30 years later, we have a meaner and tougher President, and America is better off with him.

Lou Aguilar is a published novelist, produced screenwriter, cultural essayist, and former USA Today reporter. His second novel, Paper Tigers — a Washington romance in the mad time of Trump — came out this month by Deeds Publishing, and is available from Deeds, Amazon, Barnes & Noble and great American bookstores. Lou will be signing copies of his book at Upshur Street Books in DC on Thursday, December 13, 7 PM – 8:30.