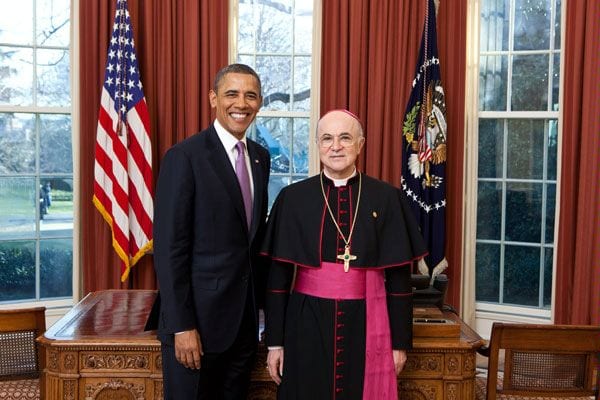 In Archbishop Carlo Maria Viganò’s recent letter to Donald Trump, he writes, “just as there is a deep state, there is also a deep church that betrays its duties and forswears its proper commitments before God.”

Naturally, the deep church resented the letter. But it particularly didn’t like that Trump tweeted about it, saying, “So honored by Archbishop Viganò’s letter to me. I hope everyone, religious or not, reads it!”

An imagined deep church? How dare Viganò notice that an entrenched bureaucracy of clerics opposed to Catholic teaching exists in the Church.

Members of the deep church quickly moved into action, pooh-poohing the significance of Viganò and seeking to discredit him. The vanguard of the deep church, the Jesuits, led the charge. They used their magazine, America, to remind people that the former papal nuncio to the U.S. — brace yourselves — adheres to Catholic teaching on marriage and other matters. This, in their estimation, makes him “outside the mainstream” of “global Catholicism.”

Michael O’Laughlin of America writes, “The archbishop’s tenure in the United States was largely uncontroversial, but a new book by the Vatican reporter Christopher Lamb about Pope Francis, The Outsider, claims that during his time in Washington, Archbishop Viganò ‘aligned himself with culture warriors and anti-Francis supporters.’ ”

Oh my. He is a dreaded “culture warrior,” which means that, unlike the deep church, he actually takes Church teaching seriously and opposes the West’s culture of death.

America also finds fault with him for daring to support a marriage clerk opposed to gay nuptials:

Archbishop Viganò made global headlines in September 2015 when he orchestrated a meeting between Pope Francis and Kim Davis, the former Kentucky county clerk who was briefly jailed for refusing to sign marriage licenses for same-sex couples. News of the meeting came at the end of the pope’s visit to the United States and created a storm in both the church and secular media, given the pope’s relatively positive views of outreach to L.G.B.T. Catholics. The Vatican later revealed that Pope Francis had been blindsided by the encounter, saying the pope was unaware of Ms. Davis’s background. In 2018, Archbishop Viganò disputed the assertion that he had deceived the pope, though Vatican spokesmen pushed back against that claim.

A 2018 story in The New York Times quotes Juan Carlos-Cruz, a clerical sexual abuse survivor who has become friendly with Pope Francis, as saying the pope told him that he “fired” Archbishop Viganò because of his role in arranging the meeting.

Yep, that sounds like Pope Francis. Remember, papal nuncios, never “blindside” him by introducing a Christian to him.

In another America article, titled “Archbishop Viganò is aligning with Trump to stay in the spotlight. Pay him no attention,” James Keane writes, “Mr. Trump was responding to yet another public letter from a marginal figure, one who has made a growth industry over the last two years of writing increasingly paranoid and disturbing missives against Pope Francis, the Second Vatican Council and many other enemies real and illusory, including most recently against an imagined ‘deep church’ that he told Mr. Trump parallels the purported ‘deep state’ that the president has blamed for so many of his troubles.”

An imagined deep church? How dare Viganò notice that an entrenched bureaucracy of clerics opposed to Catholic teaching exists in the Church. Where could he have ever gotten that idea?

America finds it very troubling that Viganò would praise a pro-life president who, unlike the Obama–Biden administration, isn’t warring on Catholics. Keane calls that “pandering”:

Archbishop Viganò, marginalized by his own rhetoric, wants to stay in the public spotlight by whatever method possible. In this case, it is by yoking his cause to that of President Trump. But this tells us more about Archbishop Viganò than it does about the Catholic Church or President Trump or anything else, and thus answers only unimportant questions. Our response at this point should be the one that so baffled us when Pope Francis first adopted it in August of 2018: Pay this man no attention.

And yet the deep church can’t stop talking about him. For such a “marginalized” man, he has struck an extraordinary number of nerves. The deep church is trying to mau-mau him into silence precisely because he is an effective voice against its liberal revolution. Like the deep state, which can’t abide critics like Trump, the deep church fears criticism from believing Catholics. Its project to take Catholicism out of Catholicism has crippled the Church, to which Viganò is drawing much-needed attention. Let’s hope his “irrelevance” continues.