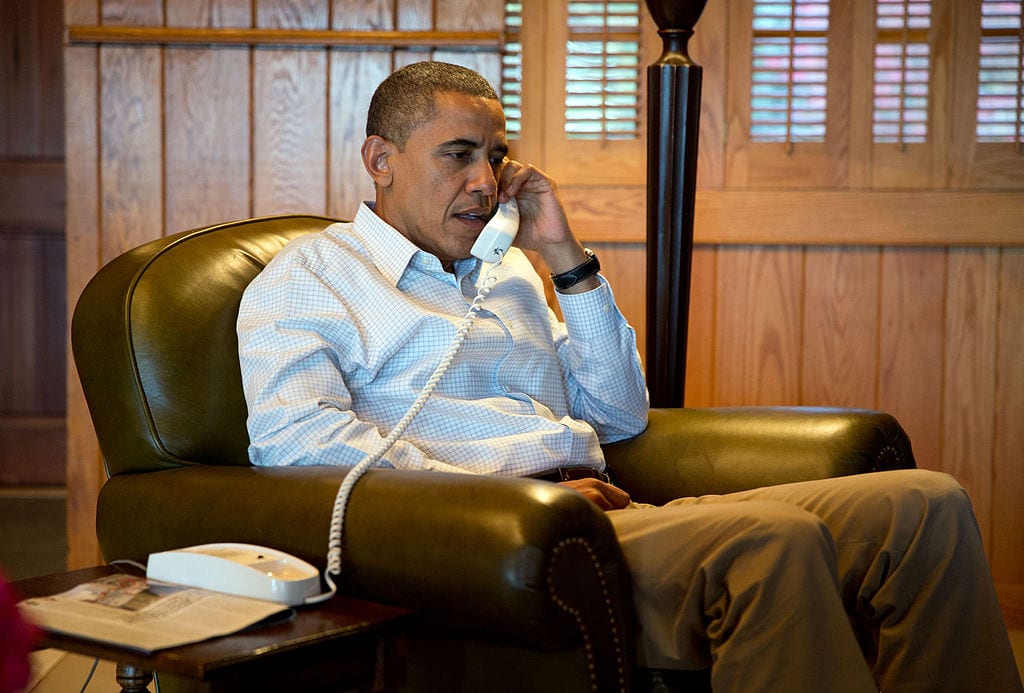 The guilty note that Susan Rice wrote to herself after Trump’s inauguration takes on more and more meaning as the shocking details of Obamagate come into focus. The Obama administration’s decision to spy on the Trump campaign was not, in her words, “by the book” but scandalously irregular. It turns out, according to Congressman Devin Nunes, that not even a semblance of “official intelligence” justified the spying. It was the probe from nowhere to nowhere, undertaken simply to satisfy the partisan hunches of John Brennan and other Trump haters in the Obama administration.

“The counterintelligence investigation uses the tools of our intelligence services that are not supposed to be used on American citizens. So, we’ve long wanted to know, well, what intelligence did you have that actually led to this investigation? So, what we found now after the investigators have reviewed it is that in fact, there was no intelligence,” Nunes told Fox News last weekend.

The probe didn’t start “by the book.” It started largely on the say-so of John Brennan, whose CIA operated like a branch office of the Hillary campaign. We know from Brennan’s own testimony and leaks that he had been lobbying the FBI to start the probe since at least the spring of 2016. But whatever alleged intelligence Brennan gave to the FBI, it was too flaky for the FBI to commit to print.

The probe was the product of a shell game played by a cast of Trump haters — from Brennan to Peter Strzok (the FBI’s liaison to the CIA, which is a key fact in all of this) to Hillary hired gun Christopher Steele. Brennan, since at least April of 2016, had been shaking foreign intelligence agencies down for any dirt on Trumpworld. He claimed that he had come up with some from Estonia, England, and other trusted “counterparts” and shoveled it to Strzok, who then dumped it on the desk of other Hillary partisans in the FBI/Justice Department’s senior leadership. Strzok would later confess to his mistress, in between calling Trump a “douche,” that the probe was just a fishing expedition with no “big there there.”

Brennan’s bumptiousness was so great in pushing and publicizing this bogus probe that even Harry Reid would remark upon it to David Corn and Michael Isikoff. Brennan had an “ulterior motive” in leaking the existence of the probe to him, Reid told the authors. The very thought of Donald Trump as president made Brennan see red and caused him to lose all judgment.

Out of embarrassment at having started a counterintelligence probe on the hunch of such an unhinged Hillary partisan, the FBI has scrambled to find a better reason for launching it and thought it had found one in the George Papadopoulos yarn. But that one just gets weirder and weirder. According to the Daily Caller, Alexander Downer, the Aussie diplomat who partied with Papadopoulos and claims the Trump volunteer made an incriminating remark, had sought out the meeting, making it look like entrapment. Downer is known for greasing the wheels of the Clinton Foundation and belongs to the jet set of international busybodies up in arms over Trump. But whatever he squeezed out of Papadopoulos, it wasn’t specific or weighty enough to include in the originating document for the probe, according to Nunes.

The Papadopoulos leak was the FBI’s attempt to divert attention from its absurd reliance on Brennan and Christopher Steele. The FBI doesn’t want to have to admit that it harassed a presidential campaign on the basis of opposition research Hillary Clinton financed, at the prodding of a CIA director in the tank for her. To make matters worse, Brennan’s alleged intelligence from the British on Trump-Russia collusion was just laundered Steele opposition research for Hillary (Steele had been feeding his work to British spies, who contacted Brennan). At the center of almost all the streams of phony intelligence flowing into the FBI was Steele. Through his relationship with the FBI, he served as a direct stream of bad intelligence. Through foreign intelligence agencies, he became an indirect stream of bad intelligence (with anything he gave those agencies re-routed to the FBI through Brennan). He also served as a conduit for opposition research from Hillary partisans at or connected to the State Department (Cody Shearer, a Hillary hatchet man, passed his opposition research through John Kerry aide Jonathan Winer to Steele, who then fed it back to the FBI).

It is no wonder why the originating document for the probe is so cryptic. It was a probe of, by, and for Hillary partisans, who, out of a toxic combination of Trump hatred and blinding liberal entitlement, had long ago thrown away the book.