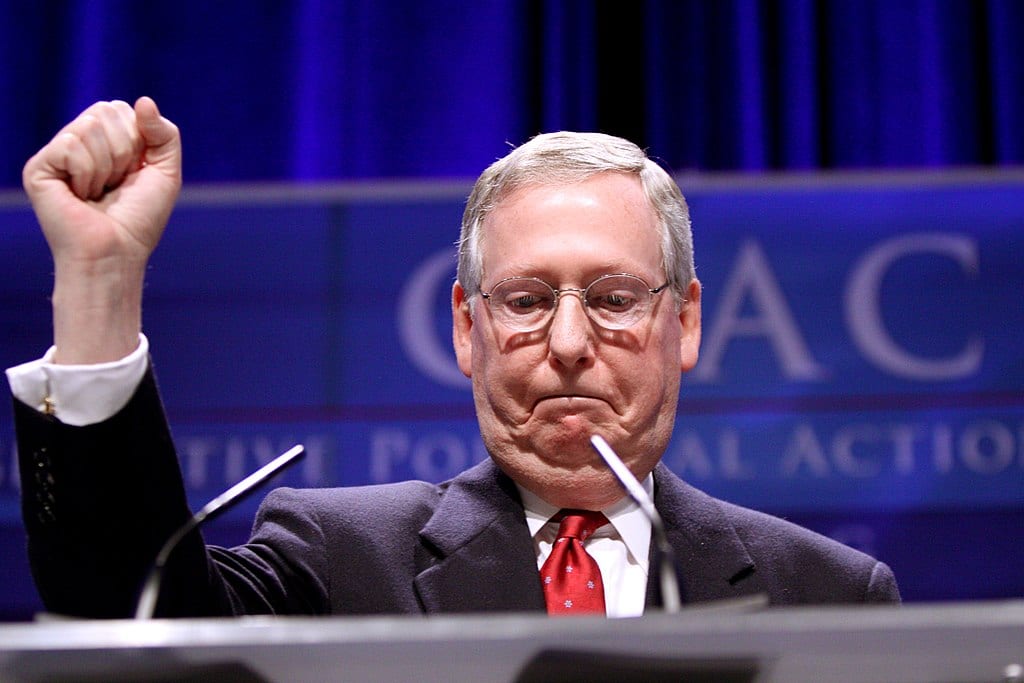 The Republican Party establishment is giving President Donald Trump the shaft. Heading into this summer, I warned that Congressional Republicans were incapable of implementing a truly transformative legislative agenda that would support the America First principles that Donald Trump campaigned on during the 2016 campaign. It seems that I am, unfortunately, right. By ignoring the Trump agenda — even actively working against it — the Congressional GOP is suicidal, as the Democrats and their psycho socialist base are galvanized and the GOP is not.

Despite having majorities in both houses of Congress, the GOP continues flailing about the place as if it were in the minority. The reason for the GOP’s legislative failures?

Part of it is simple, gross incompetence. However, the larger purpose behind the Congressional GOP’s legislative malfeasance is that many Republicans do not want Trump to succeed (except in narrow cases, such as the implementing tax cuts or enacting massive defense expenditures). Earlier this year, Congressional Republicans managed to goad President Trump into signing a ridiculous $1.3 trillion spending bill. Upon realizing the bill’s unpopularity with his supporters, Trump vowed to never sign a bill like that again. The president argued that, despite its unpopularity, he needed to sign the spending bill to give greater funding to the U.S. military.

It’s almost as though there aren’t only two parties in the United States today. Instead, there is the Democratic Party, which has all but announced its intentions to engage in a socialist revolution; there’s the anemic Republican elite — the beautiful losers — sitting comfortably in their taxpayer-feathered nests on Capitol Hill (and at various think tanks); and then Donald Trump. The first two parties are viscerally opposed to Trump’s presence in Washington, D.C. and are actively working to undermine his ability to govern, so as not to damage their gilded enclave in Washington, D.C.

Majority Leader Mitch McConnell (R-Ky.) has told his conference that Republican policy riders, even those traditionally included in appropriations bills every year, including those supported by President Trump, are “poison pills” that cannot be considered for fear they will blow up the spending process by diminishing support from Democrats.

Remember when McConnell and the other Congressional Republicans, riding the Tea Party wave of 2010-16, vowed to reduce spending? Yeah, that was a lie. And, as Bovard assesses in her excellent piece, the “‘Trump voters’ — so defined as those who supported Trump but do not identify as Republicans — are missing in action [in the 2018 midterms].”

President Trump appears to have figured out GOP duplicity and is lighting a proverbial fire under their hides: he is demanding that Congress either fully fund the border wall or suffer a government shutdown. Naturally, the weak-kneed GOP leadership is already crying over what they perceive as an irrational threat from “that man” in the White House. The simplest solution would be to give the voters (and Trump) what they want. But, Mitch McConnell and the Beltway Boys know better. They’d rather risk losing reelection than give in to Trump and the voters (or to retire, as Jeff Flake and others are doing).

Behind the closed doors of the cloakroom on Capitol Hill, many are undoubtedly consoling themselves about the possibility that, should they lose their own elections in November, Trump would ultimately be removed from office as well. After all, the Democrats will not hesitate to vote for impeachment if they have the majority in Congress again (irrespective of whether Trump is guilty of anything or not — remember impeachment is a political rather than a legal process).

Even if the GOP in Congress did consent to building Trump’s wall, it would likely demand greater government spending from Trump. In that case, then, the wall would do more economic harm to the United States than good. Think about it: the appropriation bills Congress has been writing this legislative session have been several billion dollars more than what the Trump Administration requested. This, at a time, when the national debt is at historic highs. Further, the Congressional GOP is hesitant to even talk about the immigration issue, let alone act on the president’s immigration policies. Whatever it does will be half-hearted and self-destructive.

Trump says he’ll allow a government shutdown to occur to get what he wants. That just might have to happen because the GOP won’t do it on its own. If it does, it will be a watered down, meaningless version of what the voters want. If a shutdown occurs — and if Chuck Schumer can’t be blamed again — then the GOP will likely lose enough seats to empower the Democrats again. At that point, the machinations for impeaching Trump can begin in earnest… and the agenda that you and I voted for will never be enacted.