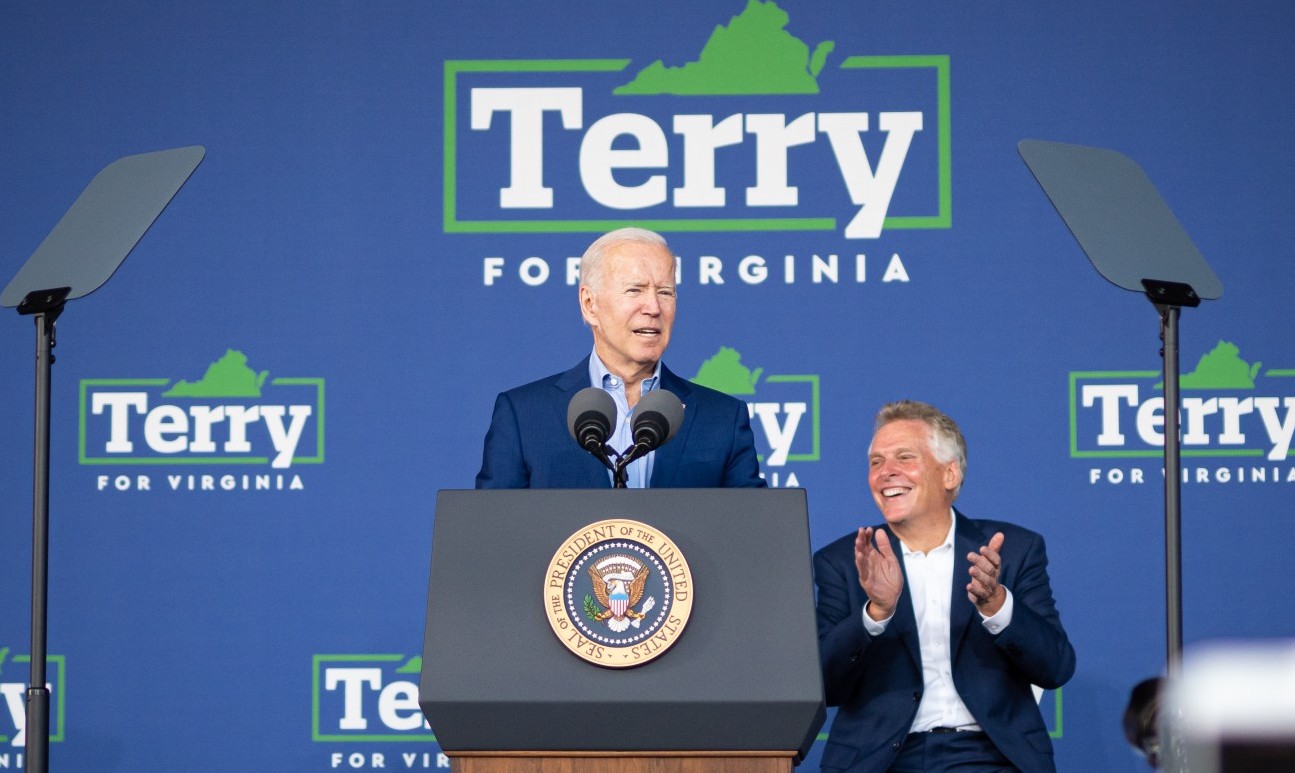 It’s not yet determined whether Terry McAuliffe and the Democrat Party are on the verge of losing Virginia in a little less than a week. The fact that it’s a very distinct possibility is nonetheless cause for notice.

And alarm, if you’re a Democrat.

Both sides of the aisle can agree that the Virginia governor’s race — and many of the down-ballot races, too — is turning on the issue of public education. State and local elections often do. But what’s interesting in this race is that McAuliffe, and the Democrat Party for which he’s more or less a generic representative, is more out of touch with the public on public education than ever before in memory.

The Democrats have always controlled the narrative on education. This is partly due to the fact almost everybody working in education is a Democrat and Democrats control all the key institutions which drive that system, at least in the public sector. It’s also partly due to the fact that Republicans have been completely passive on the educational issue for most of the last half-century.

Those colleges pumping out anti-American leftist indoctrination? Don’t forget that the funding which fuels that parade of horribles came in many or most cases thanks to Republican governors and state legislatures, or Republican alumni and donors. Nobody bothered to check on what our overfed higher ed institutions were doing with all that cash. If they had, they’d recoil in horror, because the cancer billowing out of the universities has poisoned K-12 education all across the country.

This happened, and people didn’t notice it much. Not until the cocktail of climate change lunacy, critical race theory, intersectional feminism, and transgenderism hit a critical mass and began coagulating into the religion of woke and kids barely out of diapers began reciting it. Even then, lots of parents didn’t realize the source.

Then the teacher unions bullied the wimps and collaborators on school boards into shuttering the schools and holding classes via Zoom, thus drafting parents across the country into duty as proctors for their kids’ education. That was one of the greatest tactical mistakes in American political history, for it had three intensely negative effects on the public education establishment. First, parents were extremely put out over the sudden inconvenience of not having somebody taking care of their kids while they went off to work. Second, those parents, once they got accustomed to essentially home-schooling their kids, in many cases realized it was doable. Homeschooling as a segment of the education market grew from five percent to 11 percent in only one year, and a giant chunk of the population now reports in surveys that homeschooling or other educational alternatives is an acceptable option.

And third, those parents drafted into duty as proctors got a first-hand look at what was being taught to their kids — and they didn’t like it at all.

School board meetings around the country have turned into circuses because the parents are now showing up and demanding better. They have no use for the idiotic mask mandates school systems want to impose on kids not at serious risk for symptomatic COVID, and they have zero interest in critical race theory or transgenderism.

This has been true all over the country but it so happens that its epicenter is Virginia, and Loudoun County, Virginia, in particular. There, a ninth-grader was raped by a boy in a dress in a girls’ bathroom. But the school district refused to acknowledge the incident, despite an ongoing criminal prosecution which this week resulted in a conviction and sentence. And the girl’s father, a middle-aged plumber named Scott Smith, raised hell with the school board over their refusal to properly respond to the incident.

It was a critical point in American politics which needed to be managed well by the party in charge — both in Virginia and nationally.

The Democrats have absolutely failed. They literally couldn’t have flubbed this any worse.

The Biden administration, in response to the Loudon County incident, had the National School Boards Association send them a letter demanding that the Justice Department sic the FBI on unruly parents voicing their opposition to the misrule of public education by the current Powers That Be, and with lightning speed the Attorney General Merrick Garland said he’d do just that.

The resulting uproar was so loud that in several states the state school board associations repudiated the letter. In Ohio, the state association canceled its NSBA membership. Parents around the country are seeing blood over the suggestion that exercising their First Amendment rights brands them as “domestic terrorists.”

And in Virginia, McAuliffe traipsed around the state shilling for the school boards and teacher unions, which the public didn’t notice until he committed a monstrous gaffe at a debate with the Republican candidate Glenn Youngkin.

“I’m not going to let parents come into schools and actually take books out and make their own decisions,” he said. “I don’t think parents should be telling schools what they should teach.”

That statement turbocharged Youngkin’s campaign, and it has set McAuliffe’s campaign ablaze. He’s dropped from a half-dozen points up in the polls to a dead heat, and ever since making that statement his campaign has been more and more desperate to escape it.

But he hasn’t been able to walk it back, and neither has the Democrat Party. In fact, they’re leaning in.

Garland was utterly defiant in a disastrous appearance before a House committee last week, refusing to admit a mistake in insulting activist public school parents despite withering criticism from Republican congressmen on the issue. And over the weekend, former President Barack Obama locked in the Democrats’ position on parental influence in public schools by denying it’s even an issue.

“We don’t have time to be wasting on these phony trumped-up culture wars, this fake outrage that right-wing media peddles to juice their ratings,” said Obama. “Instead of stoking anger aimed at school boards and administrators, who are just trying to keep our kids safe … [W]e should be making it easier for teachers and schools to give our kids the world-class education they deserve, and to do so safely while they are in the classrooms.”

He said that one day before the skirt-wearing rapist was sentenced and two days before the students of Loudon County staged a mass walkout to protest the system’s woke tyranny. It seems the outrage is a lot less fake than Obama’s pre-White House curriculum vitae.

So what happens next as a result of all this?

Well, there is an awful lot of evidence that Virginia is about to flip red in a major way next week. Pollster John Couvillon has been watching mail-in and early vote totals for the elections in the Old Dominion, and if he’s accurate in his conclusions it could portend quite badly for the Democrats…

The recap below is both good and bad for Democrats, as early voting (esp in the larger counties) is a source of strength for them:
(1/3)

Couvillon says the early voting in the race is off by 63 percent from the presidential election last year — down from 1.95 million to 725,000 — and worse than that the vote-by-mail numbers have almost vanished…

So it’s not unreasonable to foresee that Youngkin is going to win, and that he’ll have some coattails in down-ballot races.

If that happens — and if it doesn’t, it’s already pretty clear that the public education issue has turned Virginia from a blue state to a purple one — then public education and doing something about the abusive and incompetent leftists who run it becomes a center-stage issue for the GOP in next year’s midterms.

You’ll have lots of Republicans running on money-follows-the-student school choice policies, promoting homeschools, private schools, microschools, learning pods, and all kinds of alternatives and promising to fight to fuel them with educational savings accounts and refundable tax breaks, etc.

And winning on those issues. Because the Democrats are in abject thrall to those teacher unions and Randi Weingarten and Lily Eskelsen García, who respectively run the American Federation of Teachers and the National Education Association, are hardly going to agree to allow Democrat candidates to moderate their positions in opposition to aggressive school choice measures. And they’re certainly not going to allow their candidates to turn against transgenderism or critical race theory.

It’s worse. You probably heard about that obnoxious Washington Post op-ed by Jack Schneider, a professor in the University of Massachusetts-Lowell education department, and left-wing journalist Jennifer Berkshire which vigorously denied that parents have the right to determine the course of their children’s education. That ran Monday, and it only heated up this controversy. It was a terrific exposition of the public education complex’s hostile, elitist mindset.

They’re not going to give up control without a fight. The problem is the battlefield is becoming very unfriendly to them.

They’re going to lose the fight. If they don’t lose it in Virginia, they’re going to lose it in the midterms next year. And when the Democrats take a hard spanking from the public, with the insanity and incompetence of the education establishment as a front-and-center issue which brings suburban moms home to the GOP from their anti-Trump vacation in 2018 and 2020, it’s entirely likely that Weingarten and Garcia and some of the other education establishment figures out there begin taking fire as scapegoats for the Democrats’ losses.

They can’t abandon those unions, obviously. The teacher unions funnel far too much money into the Democrat Party for them to go cold turkey. But if a few vulnerable “centrists” here and there who survive what’s coming in 2022 (or, like Joe Manchin and Kyrsten Sinema, come up for re-election in 2024) begin peeling off in order to save themselves and agree to work with Republicans on expanded school choice, well…

It could be Randi, bar the door.

Public policy is the only thing preventing the creation of a true educational marketplace. Nothing about public education really serves the needs of parents and kids anymore, and polls show it. The market is already moving toward diversity in educational methods and institutions. The minute funding is freed up for those alternatives they’re going to explode, and they’ll do so at traditional government schools’ expense.

There’s an old saw about how someone goes broke: a little at a time, and then all at once. We’re beginning to see how that might happen to the public-school mafia. Next week’s events in Virginia could well start a cascade which is long overdue.