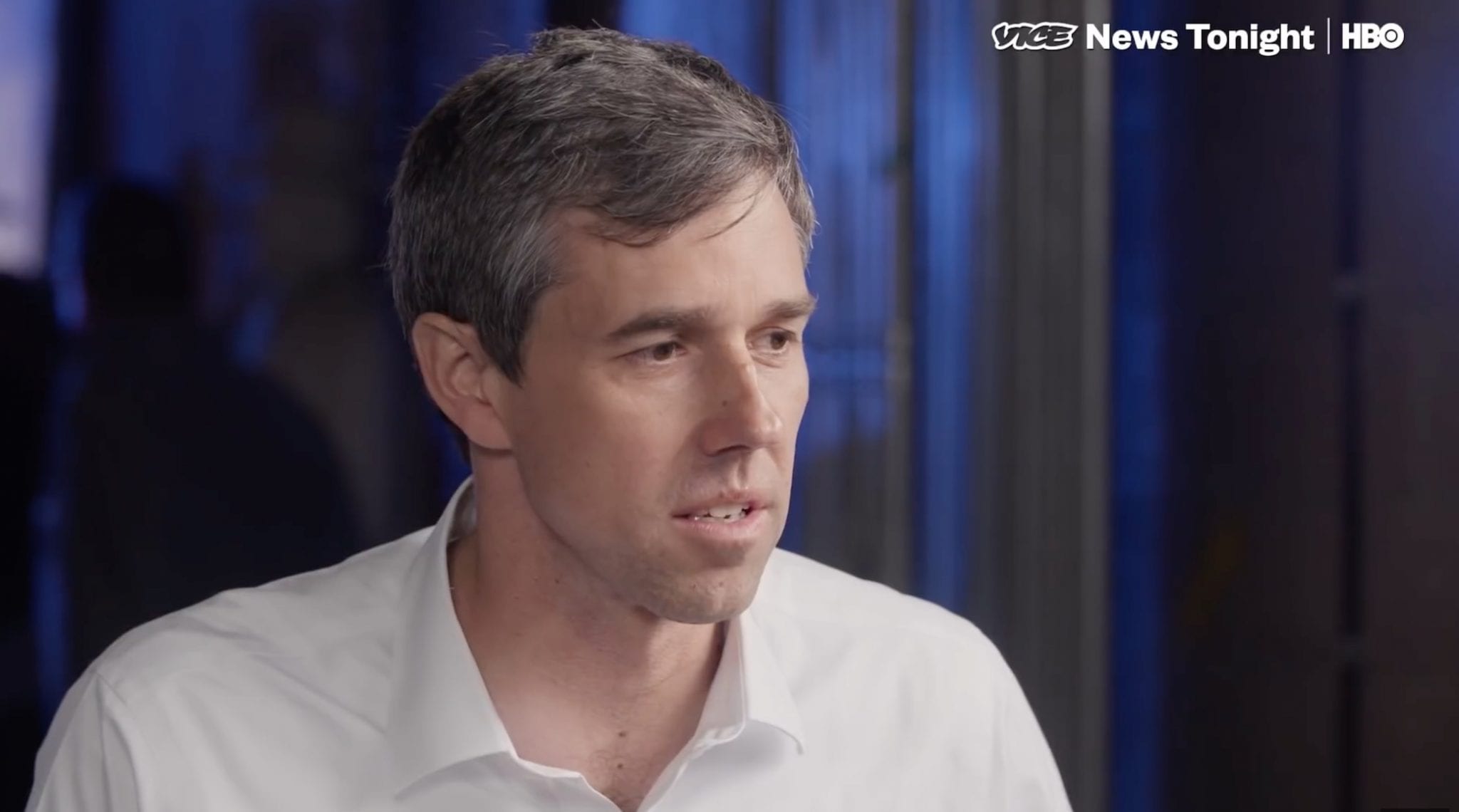 Here’s a new entry in McKay’s Rules of Politics, a list I need to compile in writing in this space at some point (and if you’d like to make suggestions to assist in populating such a list in the comments, feel free) — whenever mainstream media conventional wisdom crystallizes into a narrative so pervasive that even the pet Republicans on the CNN and MSNBC shows act as though it’s inarguable, said narrative is almost universally false and will be proved such by events shortly.

Which brings us to Tuesday night.

Tuesday was Primary Night in Texas, a state which for months — years, really — has been advertised as a blue state in the making. It’s an aspiration Democrats have been hawking as a future reality almost incessantly since even before January of 2016, when a book called Turning Texas Blue: What It Will Take to Break the GOP Grip on America’s Reddest State by Ann Richards’ former campaign manager Mary Beth Rogers surfaced with suggestions and dreamy “indicators” of a pro-Democrat switch in the making in its pages. Like, for example, the anecdote about how the voters in Denton, Texas (2016 population: 133,808), a college town in which is found the University of North Texas (2014 enrollment: 36,216), voted for a ban on fracking in 2014 which was overturned by the passage of a state law.

But this year, it isn’t just some resurgence in interest in Rogers’ rather obscure book which has fueled the Blue Texas narrative. For example, a painfully stupid column by the New York Times’ Will Wilkinson in early February predicted that Texas would turn blue as a result of the federal tax reform, because of its differing treatment of the home mortgage deduction in a city like Houston. Anyone who’s ever lived in Houston knows that perhaps the single best feature of that sprawling, zoning-free metropolis is uncommonly-cheap housing; the amount of house in a decent neighborhood with good public schools nearby you can get for $250,000 in Houston beats practically any metropolitan area in America. A change in the mortgage interest deduction from a previous cap of $1 million to a new cap of $750,000 will affect Houston far less than, say, Boston or San Francisco where there are no Republicans to speak of.

And then there was a moronic piece at NBC News’ website on Sunday touting the fact that Donald Trump only won Texas by nine points — a half-point less margin than Trump won swing-state Iowa by in 2016! — as a harbinger of the state’s impending Democrat turn, not to mention happily boasting that Democrat early voting, boosted by third-party spending courtesy of a myriad of usual-suspect leftist groups, was significantly up from previous years…

There are already signs, statewide, that the GOP could be facing a large enthusiasm gap in Texas. Early vote numbers from the state’s 15 largest counties show a strong Democratic tilt.

Through 11 days of early voting, 29,000 more Democrats had voted than Republicans in those 15 biggest counties. That was an enormous flip from the 2014 midterm primaries when registered Republicans held an edge of more than 100,000 over registered Democrats in the early vote.

In fact, through the first 11 days of early voting, the number of registered Democrats who had cast a ballot was up more than 100 percent from 2014. The number of Republicans was up from 2014 too, but only by about 16 percent.

All of which is fabulously impressive to be sure, except that when Election Day came on Tuesday it didn’t bring such terrific news for the Democrats. Republican turnout in party primaries totaled over 1.5 million votes; for the Democrats, just a million.

That’s a 60-40 Republican advantage, which is less of an edge than in a few previous recent midterm elections but not exactly the beginning of a blue wave.

At the top of the ticket, Ted Cruz received some 1.1 million votes in pulling 85 percent of the GOP primary electorate. The Democrats’ Great Irish (and faux-Mexican) Hope Robert “Beto” O’Rourke managed about 600,000, or about 60 percent of the vote, against a pair of unfunded challengers. O’Rourke made a heavy show of visiting all 254 of Texas’ counties — it looks like in some of the rural ones his efforts did more harm than good. O’Rourke didn’t even win the Democrat primary in Jefferson County, where working-class Beaumont (and a heavy black population among his party’s base) is located.

And there were four “swing” House Districts NBC News advertised as worth watching based on Trump’s soft performance in 2016 — the 7th, 21st, 23rd, and 32nd. Most prominently among those was the 7th District, where Republican incumbent John Culberson is up for re-election. But the Democrat primary was a disaster by any real measure; not only did Culberson pull better than three times the votes of any of the Democrats running in the opposite primary despite running mostly unopposed against an underfunded challenger, and not only did GOP voting outpace Democrat voting 38,000 votes to 33,000, but the Democrats will have a knife fight of a runoff election between establishment candidate Lizzie Pannill Fletcher and Bernie Sanders-style leftist Laura Moser — who made the runoff despite a determined Democratic Congressional Campaign Committee effort to kill her off.

Don’t bet against Moser winning that runoff, but definitely bet against her beating Culberson in the fall. Bernie Sanders-style socialism will sooner get you hunted with AR-15’s out of helicopters like a feral pig in Texas than get you elected.

Everyone knows this. Democrats don’t want to admit it.

Things didn’t go a whole lot better in the other three “swing” districts. In the 21st, where GOP incumbent Lamar Smith isn’t running again, 18 Republican candidates combined to pick up 71,000 votes while four Democrats combined for 51,000. In the 23rd, GOP incumbent Will Hurd got 80 percent of 30,000 GOP primary votes while two Democrats will be in a runoff after a primary which generated 47,000 ballots. Hurd will have some ground to make up, but he’s likely to catch a lot of national GOP money in what could be a tough, though still winnable, race in a true swing district. In the 32nd, GOP incumbent Pete Sessions cruised to renomination with 79 percent of 41,000 votes while the Democrats will have a runoff after seven candidates combined for 40,000. That might look like a close race, but it won’t be this fall.

And if the Texas-style barbecue of the Blue Wave narrative wasn’t enough, Thursday saw an ugly poll for Democrats with ambitions of a Senate takeover — a raft of numbers from Axios/Survey Monkey showed a host of Democrat incumbents under water in red states Trump won in 2016.

For some reason this was a surprise to people crowing about Chuck Schumer as the soon-to-be Senate Majority Leader, a rather delusional bit of optimism on the Left that completely denied the fundamentals of electoral politics in those states. That Joe Manchin would be nine points down to a generic Republican in West Virginia, for example, is a perfectly predictable number in a state where the Democrats have thoroughly collapsed thanks to their anti-coal energy policies. That Claire McCaskill would be down eight to Republican Josh Hawley in reddening Missouri, when McCaskill needed a Todd Akin meltdown to avoid losing re-election in 2012, should have surprised no one.

But the numbers were also terrible outside of those two states. Jon Tester is hopelessly behind, by 12 points to a generic Republican in deep-red Montana, which was very predictable. But Joe Donnelly is down six in Indiana. Heidi Heitkamp is down two in North Dakota. Tammy Baldwin and Debbie Stabenow poll only 49 percent in Wisconsin and Michigan, before opponents have even materialized. Sherrod Brown is only ahead of GOP Rep. Jim Renacci 50-45 in Ohio. Bob Casey has an unimpressive 52-43 lead over Rep. Lou Barletta in Pennsylvania. And Bill Nelson’s lead over Rick Scott in Florida is a surmountable 53-43.

Those are not numbers that look like a Democrat wave. If anything, they point to a potential Republican gain of at least a half-dozen net Senate seats, perhaps more. And if the Democrats’ much-ballyhooed Blue Wave in Texas nets them all of one Congressional seat (Hurd’s TX-23, which need not be conceded yet) which was in their hands as late as 2014, well…

It’s not much of a wave. It might not even be much of a ripple.

Unless we’re talking about a wave of false advertising, that is.