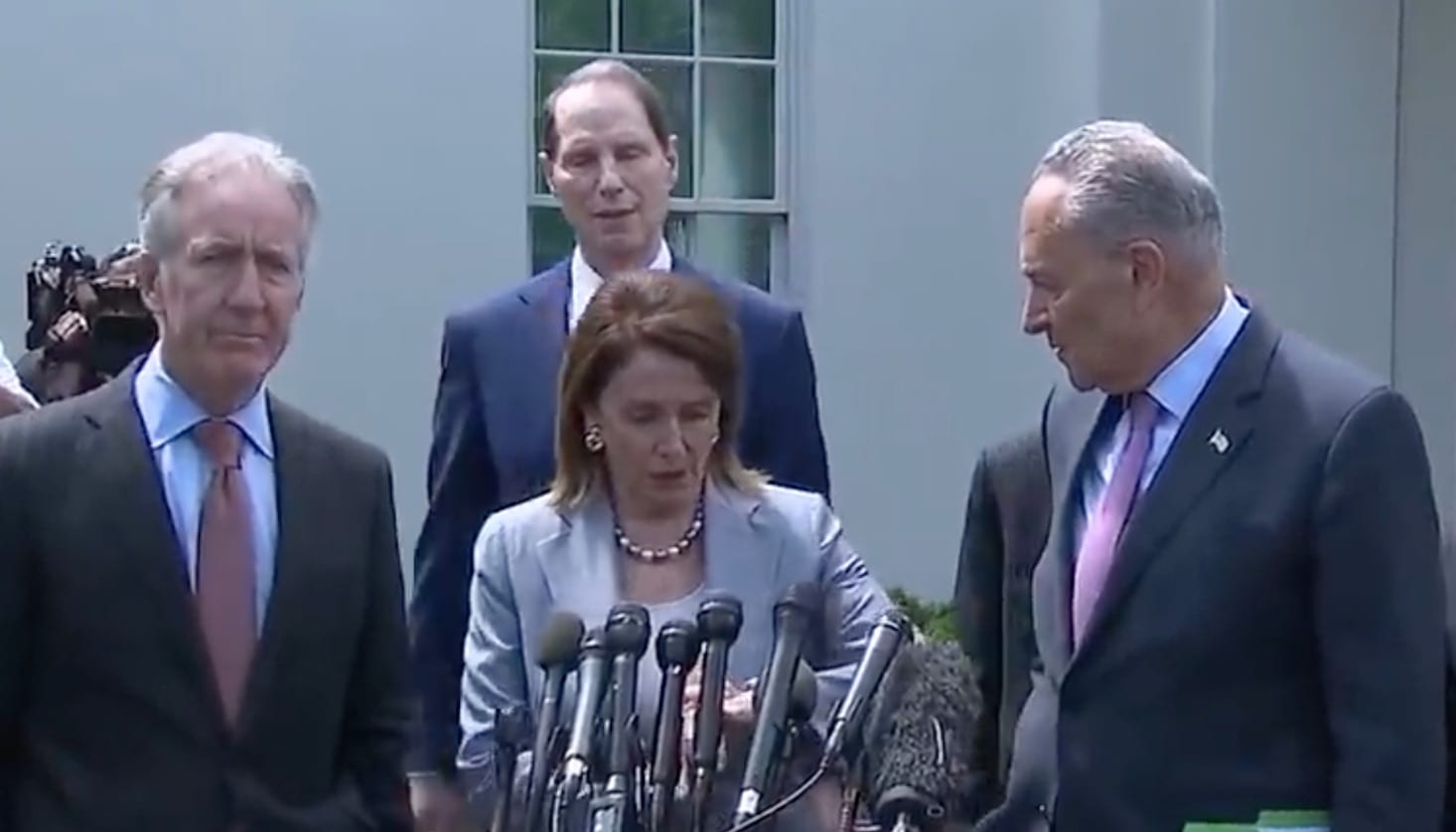 House Speaker Nancy Pelosi and Senate Minority Leader Chuck Schumer emerged from the White House on Tuesday after meeting with President Donald Trump. They announced that Trump and congressional Democrats had agreed to spend $2 trillion on a big infrastructure package.

It’s amazing how chummy partisans can be when they doubt they will actually have to get anything done — other than set a trap for the other side.

Schumer confessed Democrats were ready to come in with a lower number, but Trump was gung-ho on $2 tril.

And why not? The chances are next to nil they will pass actual legislation before the 2020 election. In the meantime, as they prepare to blame the other side for a failure to fix crumbling roads and bridges, they can leave the impression in the public mind that a trillion here and a trillion there is just loose change.

Adie Tomer of the Brookings Institution was taken aback by Washington biggies throwing out such a huge sum as if it’s not a complete sea change. He noted, “What they unwittingly announced today is another New Deal, like FDR’s New Deal. That’s how big this would be.”

While they’re talking about a 10-year spending plan, that’s a huge chunk of change. And if Washington solons don’t come up with a way to pay for it — standard operating procedure in this town — the notion could add to the $22 trillion national debt.

As it is, according to the Committee for a Responsible Federal Budget, “A child born in the United States today will immediately inherit almost $50,000” in IOUs.

Schumer also told reporters that in three weeks, Trump would detail how he plans to fund the package. Given the president’s reluctance to make the public pay for his high-rise schemes, that sure sounds like a setup for failure.

Democrats want Trump to shave back the 2017 Tax Cuts and Jobs Act to pay for big projects. The likelihood of Trump taking back some of his own tax cuts is only slightly more likely than Trump admitting he’s ever been wrong about something. Senate Majority Leader Mitch McConnell has called a peel-back of the tax cut a “nonstarter.” But even if he hadn’t, the GOP Senate is not going to raise taxes.

A hike in the gas tax could help pay for the package, but it can’t fund the many things that Democrats define as “infrastructure” — broadband in every American home, more money for housing, more spending on renewable energy and fighting climate change. No wonder White House counselor Kellyanne Conway warned Democrats not to push through a version of the Green New Deal under the guise of infrastructure.

But Democrats declared that renewable energy projects that address climate change must be part of the infrastructure package. Sen. Brian Schatz, D-Hawaii, told VICE News, “Without a clean-energy emphasis, it’s a nonstarter.”

They undercut their purpose by putting the need to spend on water infrastructure in the same bucket as paying for broadband. If everything is a priority, nothing is priority.

Also, it would be nice to see Washington spend on maintaining deteriorating buildings and bridges rather than building high-ticket edifices and railways.

Then there’s the far-left rump of House Democrats that wants to focus on impeaching Trump rather than working with him in any way.

Pelosi told reporters, “We cannot ignore the needs of the American people.” She shouldn’t sell short the far-left members of her caucus who hate Trump so much they are prepared to oppose big government spending.

In short, both parties are likely to sabotage any deal, then blame the other guy for not working hard for the hardworking taxpayer.