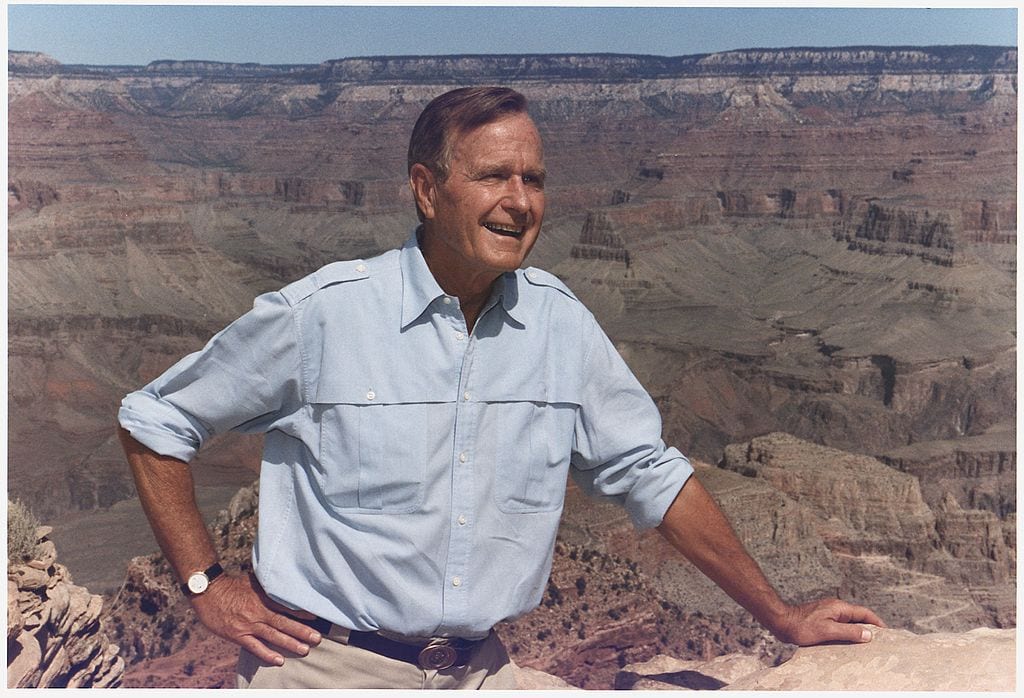 I was having lunch with Pennsylvania Congressman George Goodling in the House Dining Room. I was 19 years old, and, with thousands of other college students, I was in Washington to protest the shooting of four Kent State University kids who were shot to death by the Ohio National Guard in the middle of protests over President Nixon’s decision to invade Cambodia.

Within minutes of Nixon’s televised address to the nation on April 30, college campuses around the country began stirring in protest. Over the course of the next few days the youthful anti-war movement had spun out of control. On May 2, someone set the Kent ROTC building ablaze. Governor James Rhodes was furious and ordered in the Guard. The protests grew, and on May 4 there was a fatal showdown, leaving the four Kent students dead. All hell quickly erupted across the country, with some 500 colleges shutting down. Students from across the nation descended on Washington to protest. In my case, this meant a respectful visit to my congressman, who nicely invited me to lunch to discuss. As we made our way out of the dining room, Goodling paused and introduced me to his friend — Texas Congressman George Bush. We chatted. He was very thoughtful, no airs and heard me out, encouraging my involvement in public affairs.

I was impressed, and dropped him a note thanking him for taking the time to talk to me. To my amazement I got a note back thanking me.

Time moved on, and years later I found myself in the Reagan White House as an associate political director. Among my tasks was arranging briefings for Reagan supporters around the nation. They would come to Washington on their own dime, with a full day at the Old Executive Office Building next to the White House where I would arrange for a day of talks by various Reagan Cabinet officials and either the President or Vice President to close it out. On one occasion Vice President Bush arrived in the small ante room next to the auditorium, chatting with one of his former staffers who had shifted over to work in the Reagan political office. I was on stage to make the introduction, and did so. “Ladies and gentlemen, the Vice President of the United States.” The audience rose and applauded… and… nothing. The applause died down. There was laughter. I stood there a moment watching the unopened door and tried again, raising my voice a notch. “Ladies and gentlemen, the Vice President of the United States.” Of a sudden the door swung open and a sheepish looking VP bounded out as the audience laughed and cheered. In typical Bush style, standing casually at the podium with his right hand in his pants pocket, he quipped about missing his cue and then, without a note, launched into his talk.

Over the course of the last few days as the reality of the news of his death has slowly sunk in, those two moments kept coming back to me. I had several other opportunities to be around him at various receptions and meetings in the White House, and have the photos of those moments taken by the ever present White House photographer. In his own administration I would be over at the Department of Housing and Urban Development with Secretary Jack Kemp, a one-time rival for the 1988 GOP nomination. But the memories of those earlier two particular meetings have stuck with me.

The reason, I guess, is the reminder of just how down to earth and decent a man George H.W. Bush was. Meeting him, unless one knew, you would have no idea that when he was an 18-year-old kid he was signing up for the U.S. Navy to become a fighter pilot and that by the time he was 20 he had been shot down by the Japanese over the Pacific. His two crew members killed, Bush parachuted out, paddling a raft in the open and considerably dangerous Pacific until rescued by an American submarine. (Remarkably, the rescue was captured by a sub crewman with a movie camera. As seen here.) He later confessed that the experience had an understandably profound effect on him, finding himself asking the question “Why had I been spared and what did God have for me?”

Today, we know why. A long and distinguished career in business and public service followed, but most of all his life produced an outstanding family of children and grandchildren in a 73-year-long marriage.

It is interesting to see some observers puzzle over just why President Bush was a one-termer. There is, in my view, an answer. Bush was a moderate, Republican Establishment politician as the Reagan era dawned. In 1980 he carried that flag into the Republican primaries. While coming in second to Reagan, it was clear that the GOP moderate wing was losing its support among the GOP base. In a gesture of political coalition building, Ronald Reagan selected Bush to be his vice president. Predictably Bush could not possibly have been more loyal to Reagan for the eight years they were in the White House. In 1988 Bush campaigned as Reagan’s heir, and was elected.

In the aftermath of the Gulf War his favorability in the polls was in the nineties. But there was a problem.

After prominently saying in his acceptance speech at the 1988 GOP convention that when Democrats would come to him for tax increases if he were president he would say “Read my lips. No new taxes” — he in fact went along with a Democratic congressional demand to do just that. It hurt him with the GOP base — big time. Coming along to capitalize on that was former Reagan and Nixon aide Pat Buchanan. Pat scored an unexpected 37% of the vote in New Hampshire, a surefire warning sign that the President was in trouble with his own party. He still managed to win re-nomination, but even with Buchanan defeated suddenly he had to face the third party bid of populist businessman Ross Perot. In a three-way race with Democrat Bill Clinton, the Perot candidacy was fatal. A good bit of the Reagan base went with Perot, who scored 18.9% of the vote with Bush drawing a mere 37.4%. Clinton won with 43%. Obviously, it seemed clear that had not Bush gone back on the tax pledge, there was a potential Reagan-style landslide for him in the range of 56% — a percentage that would have wiped Bill Clinton off the electoral map. In its own way, the 1992 election was a harbinger of what was to come over the next few decades, with moderate GOP presidential nominees either losing general elections outright — Bob Dole, John McCain, and Mitt Romney — or winning by the skin of their electoral teeth, Bush’s own son, George W. All of which set the stage for 2016 and Donald Trump’s Reagan-style defeat of a veritable fleet of Establishment Republicans and Trump’s election by a considerable electoral college victory of 304-227 over the Establishment Democrats’ Hillary Clinton.

While all of this will be the stuff of political science classes for times to come, none of it takes away from the fact that President George H.W. Bush was the president who sealed the conclusion of the Cold War that Reagan had done so much to end, presiding over the dissolution of the Soviet Union. Along the way he saved Kuwait from Iraq’s Saddam Hussein by building a masterful 30-nation coalition, and removed Panama’s dictator Manuel Noriega, thus securing the safety of the Panama Canal. Not to mention Bush carefully helped to bring about the reunification of Germany after a full 45 years of Cold War division between a Communist East Germany and a free West Germany. A division that began in 1945, one year after he was shot out of the Pacific sky in the same conflict that would divide Germany — World War II. Bush would be the last veteran of World War II to sit in the Oval Office, ending a run that began with the election of D-Day hero General Dwight Eisenhower in 1952.

All in all it is hard to imagine having lived a more amazing, loving, and fruitful life than that of George H. W. Bush. Coming into the eternal rest that faces all, America and the world are understandably taking the time to reflect on a life so very well and nobly lived.