Have you heard that there’s a “national teacher shortage” in our public schools across the country? Well, apparently it’s a real thing.

We know this because CBS News tells us so:

The Department of Education reports a general shortage of teachers in parts of Colorado. Nationwide, the Bureau of Labor Statistics reports 5.4% of educational services jobs were open in December 2021 — more than double the rate (2.6%) from a year prior.

Teacher shortages may remain a challenge for years as fewer students pursue the profession. In 2018, only 4.3% of college freshmen intended to major in education, compared to 11% in 2000, according to UCLA’s Cooperative Institutional Research Program….

Similarly, more than half of teachers (55%) surveyed last month by the National Education Association say they will leave education earlier than they had planned. Like Hirsch, three-fourths of those surveyed said they’ve had to fill in for colleagues or take on extra duties due to staff shortages, and 90% said feeling burned out is a serious problem.

You can almost smell what this piece is prepping the battlefield for. After all, this was Joe Biden last July:

Speaking to the nation’s largest teachers union, President Joe Biden said Friday that the pandemic has given America’s parents the “ultimate education” on the challenges of the teaching profession. But even more, he said, the last year has proved that teachers across the U.S. deserve higher pay.

“You deserve a raise, not just praise,” Biden said in remarks at the National Education Association’s annual meeting in Washington. “Every parent in this country who spent the last year educating their children at home understands that you deserve a raise.”

Biden made the case while selling his proposed legislative priorities and budget for next year, which includes $20 billion in new funding that aims to spur states to increase teacher pay. A close ally of teachers unions, the president went on to describe educators as “the single most important component of America’s future.”

And all around the country those pay raises are kicking in as states are giving teachers bumps of 4 percent, 5 percent, and even 10 percent. Of course, with inflation at 7.5 percent, a 5 percent pay raise still means you’re losing — so how much good is all that federal swag, anyway?

But if teachers are catching pay raises from New Mexico to North Carolina and beyond, why are they leaving?

Well, here’s a meme that in various forms has been circulating on the internet: 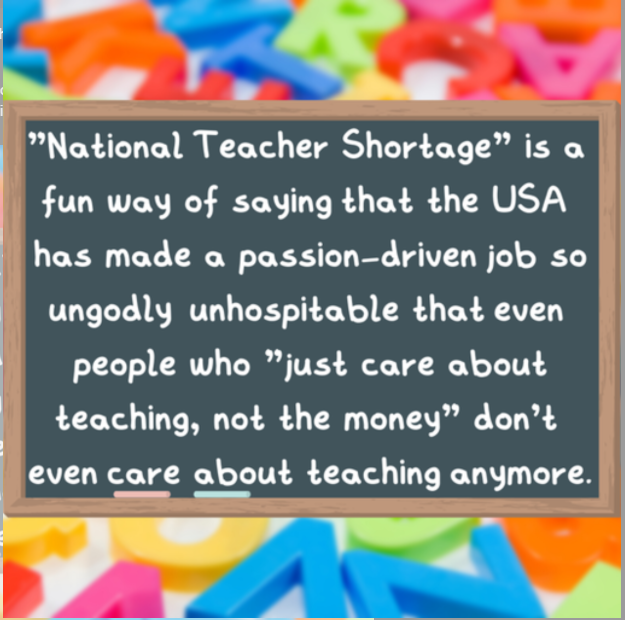 Assuming that meme is true, it would suggest that you can’t fix that problem with across-the-board 5 percent pay hikes.

The way you can fix it is to change the entire structure of how teaching works.

Here’s a fun question for you: how many unionized professions are those where the people in them are excited to get up and go to work every day? As the meme notes, teaching is supposed to be a passion-driven job, yet talk to someone who’s been a teacher for five years or more and you’ll more often than not hear nothing but complaints.

Do they decide they hate teaching? Not really. What they hate is the bureaucracy and bullshit they have to deal with in the schools, they hate the hostile relationship they get all too often with the parents, and so on.

In other words, what most often makes the teachers miserable is the structure of modern public education. That’s why they’re quitting.

And it’s interesting that this structure has been built mostly thanks to the political power of the NEA and the other teachers unions in the governance of the schools.

How does that happen? Well, it’s pretty simple. A union doesn’t exist to uphold the interests of the best people in a given profession. To the contrary — it’s there for the worst people. The best people actually do a whole lot better without the union. The best people could probably serve their interests most completely by hanging up a shingle and enjoying the spoils of being in demand. And teachers unions do a bang-up job of hammering them down to the point where after 10 years or so you can hardly tell the best teachers from the worst.

So when the state legislature wants to give out pay raises to teachers, there are always Republicans who say, “Let’s give those out based on merit,” and it sounds terrific. Right up to the point when they start trying to figure out how to do that.

And then it falls apart, and the crappy teachers end up with the same 5 percent bump the all-stars get.

None of this works. It’s all stupid.

I talk about this in The Revivalist Manifesto, the book I’ve got due out in May, but what’s crucial is for the GOP to stop trying to nibble around the edges of reforming this moronic, Soviet-style public education system which is supposed to be built to serve the needs of the teachers (if you disagree with that, then at least please don’t try to claim it’s built to serve the needs of the students or parents) and can’t even do that.

No, don’t try to fix this system. Don’t try to institute “merit pay increases” for teachers or any of that. Don’t even waste time trying to give out school vouchers.

All of those things are Republican attempts at fixing the schools, and they’re destined for failure. Because the status quo crowd at the NEA, the AFT, and the National School Boards Association, the people who have been methodically ratcheting public education further and further to the left to such a point that school libraries are now festooned with kiddie porn, the trans agenda is being foisted on second graders and critical race theory is as ubiquitous in the pedagogy as useless COVID masks are on the faces of those miserable kids, is more than happy to engage on those reforms.

Not to support them, mind you. To bog them down in devil’s-in-the-details trench warfare. They know that the conservative education reformers who don’t actually reside within the system and who are working on behalf of the parents, if in fact they have a constituency at all (most of their kids are in private school, if they’ve even still got kids in school), will ultimately get tired of slugging it out at school board meetings or the state House Education Committee hearings and go away.

It’s a waste of time.

You want happy teachers who won’t quit the profession? Fine. Make them small business people. Put that education money in the hands of the parents, remove the strings, and give them the freedom to make good choices for their kids’ education.

Maybe some of the choices won’t be so good. I get that. I’d say you have to really suck as a parent to do much worse than to let the local public school dose your kid with mind-altering drugs so he or she behaves like a zombie in those classrooms and so the local school district can chisel out a few more federal dollars. I’m not blaming the parents for this frighteningly common phenomenon, mind you — if you don’t have the money for private school and you don’t have the hours in the day to homeschool that kid, what other options do you have?

A Republican Party worthy of the political power the public appears awfully anxious to give it (Emerson now has the generic congressional ballot at R 50, D 41) would be working on budget legislation that would transform federal education funding to a full money-follows-the-child program within the 2024 federal budget, and signal that without Joe Biden acceding to that demand a government shutdown was coming.

Let’s have that fight. Let’s have Biden and his minions take to the airwaves and explain to people why the government schools, which continue to force masks on perfectly healthy kids, teach them that America is a hellishly racist place, and even continue in some cases to close the doors and force internet learning on them, can’t be touched by competition.

Let’s let the American people know that Democrats want to protect teachers unions and leftist hack politicians on local school boards when they’ve conspired to destroy two years of education for our country’s kids. Let’s make sure they’re about keeping the market from imposing any consequences at all on that willful, intentional, premeditated, and vicious failure. And let’s give Americans a choice — perpetuate a system so manifestly awful that it chases away the very people it’s supposed to coddle or give a direct $5,000 (or whatever the figure is) shot in the arm to parents who want to do better for their kids.

Talk to state legislators or lobbyists or others involved in the political process on the GOP side, and you’ll get a common refrain. “Our people don’t want anything from government,” they’ll say.

This has been held out as a virtue. It isn’t. It’s evidence of political incompetence. It tells you the Republican Party treats its voters horribly and can’t consistently achieve a governing majority because it doesn’t deserve one.

Make a political constituency out of those homeschoolers and private school families by diverting federal — and state and local, where you can — government swag to them instead of the education lobby. Do that and they will unanimously support the GOP the way the teachers unions support Democrats. And the more swag you throw their way, the more of them you’ll get, because if people can afford homeschooling or private school thanks to the money-follows-the-child funding vehicle you’ve established they will choose those options.

And they’ll vote for the politicians who gave them that freedom and against the ones who want to drag them back into those awful government schools.

We’re spending more money on public education than ever before, and that system can’t even keep teachers from fleeing. Why bother perpetuating that failure? Blow it up and let’s do something better.