While propaganda has always been around, what makes these books so dangerous is that teachers are working to incorporate them into young children’s curricula without any regard for the rights of parents. In Lou­doun County, Virginia, for instance, administrators installed “diverse classroom libraries” in elementary and high school classrooms in the fall of 2019 which included LGBTQ books.

“I really have a problem with people teaching children that it’s possible to be born in the wrong body,” Virginia parent Natassia Grover told the Washington Post about the installed libraries. “It is 100 percent a political agenda.”

Parent activists in Loudoun County and other places across the country have spoken out against the presence of these books in classrooms and libraries, but activists are determined to keep the books and smear anyone who objects. There was even a campaign launched in Loudoun County called the #BigGayBookDrive, which donated hundreds of books to school libraries. The bitter controversy in Loudoun County was capped by a six-hour school board meeting where opponents of the woke libraries wore green and supporters wore purple.

The Daily Wire’s Matt Walsh recently satirized the LGBTQ picture books genre with his story Johnny the Walrus, about a boy who thinks he’s a walrus and whose parents put him through a process to try to become one. The point of the story is to show how transgenderism is illogical.

What is most consistent across the LGBTQ picture books genre is that it forgoes genuine storytelling so that it can pack in as much brazen propaganda as possible. These stories follow formulaic stereotypes, like a girl who decides she’s a boy and seamlessly transitions to the joy of her family or a gay couple who are perfect together and perfect parents. And some books forgo the pretense of a generic story altogether and commence immediately with blabbering off LGBTQ dogmas.

Calvin, published in November, follows a girl who decides she’s “a boy in my heart and in my brain.” Her friends and family “rally around him” and “all his ‘what-ifs’ begin to melt away,” the book’s description reads.

The beginning of the book shows a little girl playing with a ball and jealously admiring a little boy swinging on the monkey bars. Then she says, “I’d dream about swim trunks like my dad and brother wore.” Once she tells her parents that she’s a boy, her father immediately says, “We love you if you are a girl, a boy, neither, or both. We love you whoever you are.” He then tells her that “the word for how [she] felt was transgender.”

“Quick to support him,” the book’s description reads, “his loving family takes Calvin shopping for the swim trunks he’s always wanted and back-to-school clothes and a new haircut that helps him look and feel like the boy he’s always known to be.” 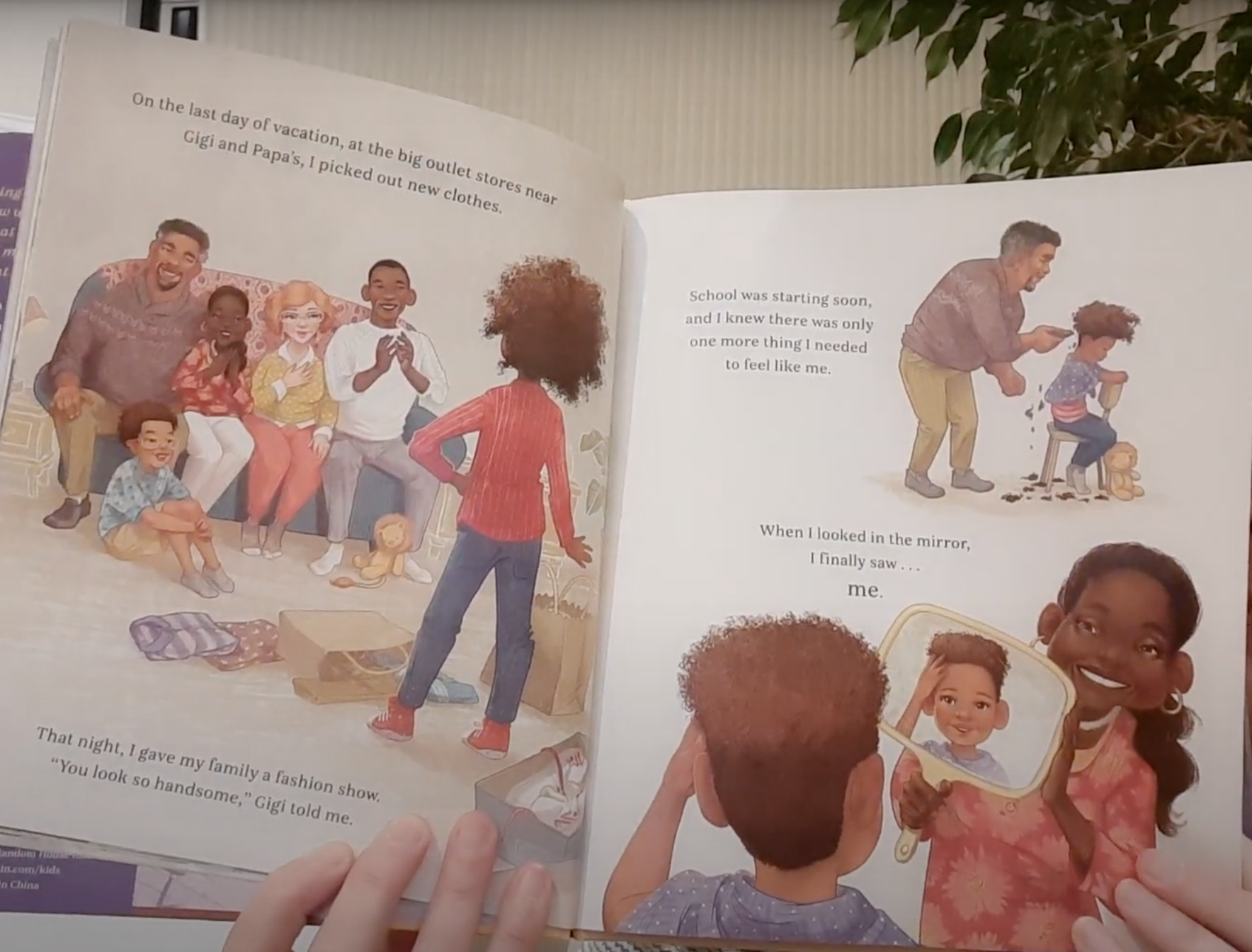 A teacher reads the book Calvin to her class virtually online. (Teacher Chloe/YouTube)

That book was written by transgender activists at the Human Rights Campaign who made their career off of their “transgender” child.

Calvin is not unlike August 2020’s I’m Not a Girl: A Transgender Story (although that character receives slight pushback for about a page when her mother insists she’ll look pretty in the dress she bought her for picture day) and the classic of the transgender children’s picture book genre I Am Jazz, which tells the idealized childhood journey of transgender activist Jazz Jennings, whose publicized “gender transition” on ABC’s 20/20 in 2007 was instrumental in getting segments of the population to support “gender transition” for children. (Jazz’s mental health problems and severe complications from so-called “gender-confirmation surgery” are usually ignored.)

There’s also a whole slew of books in which a child interacts with a perfect gay couple and that’s the plot.

In 2020’s Uncle Bobby’s Wedding, Chloe’s Uncle Bobby, a kind man whom she adores, announces to her family that he is getting married to Jamie, an Indian man. Chloe has a hard time accepting the news at first because he is her “special uncle.” But Uncle Bobby sits down with her on a swing set and explains to her, “Jamie and I want to live together and have our own family.” Chloe responds, “You want kids?” to which he responds, “Only if they’re just like you.”

In April 2021’s Grandad’s Camper, Grandad tells his granddaughter about Gramps, who has since died. Grandad shows her pictures of their adventures around the world when they were young and tells her about their evening bonfires on the beach. School Library Journal notes, “The grandchild, with long curls, is Black, as was Gramps, who has passed away.” It remains unclear whether or not the girl is biologically related to one of her grandpas.

Then there are the explainers that give the LGBTQ party line without regard for narrative.

One example is the 2019 picture book The GayBCs, which is aimed at readers ages 3 to 7 and for which the author has created an “educators’ guide.” The book starts off with pretty adult material for 3-year-olds and continues that way for the remainder of the book. The letter A in the book stands for “aro and ace,” which means someone is “aromantic” or “asexual” (whatever that means). The book also actively encourages children to adopt the letters it gives as their own. The letter B in the book stands for “bi,” as in bisexual, and the book’s description of it is, “You can shout it out loud: ‘I like more than one gender and that makes me proud!’ ” 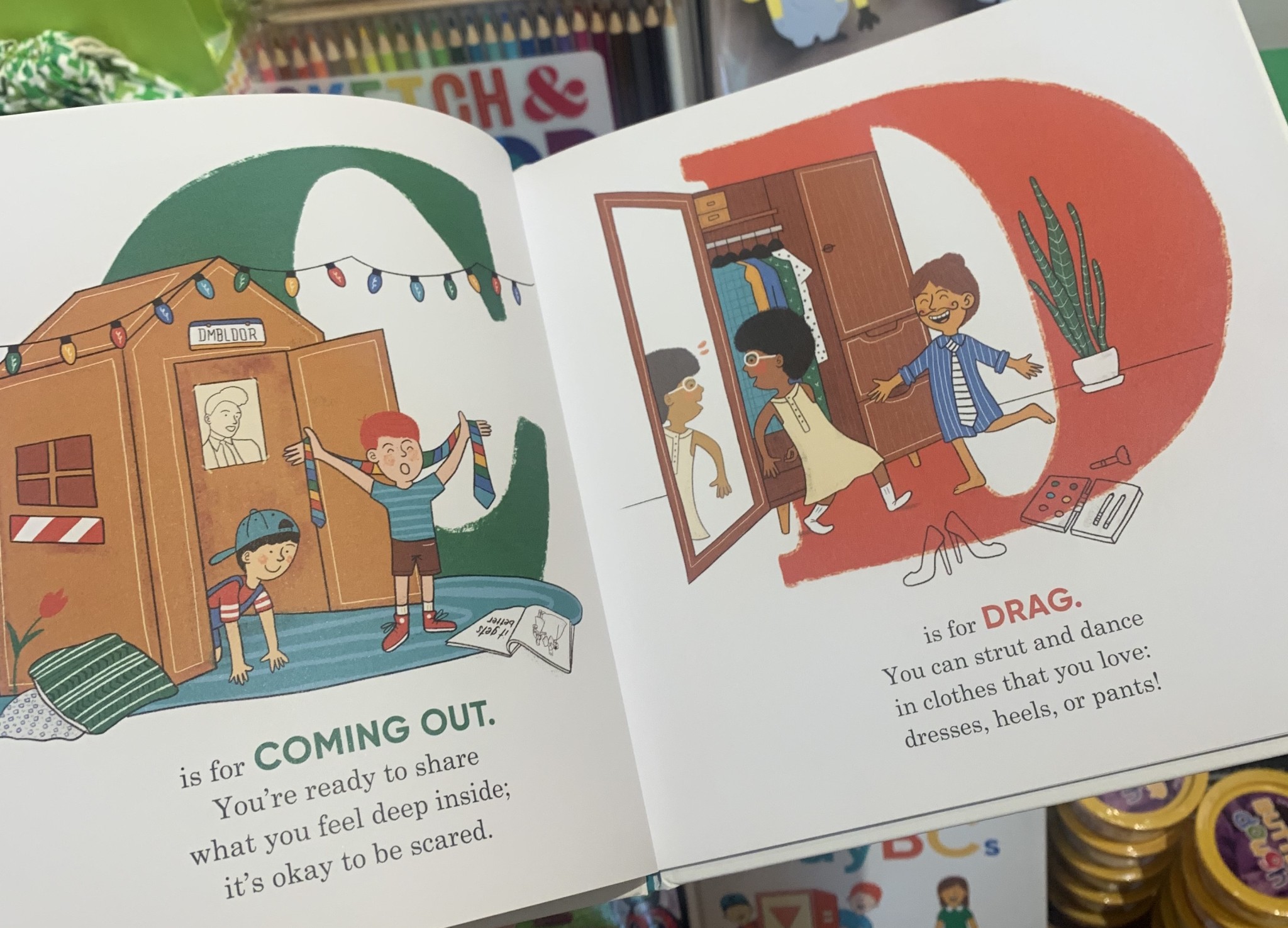 A page from the GayBCs

The book keeps getting worse, with many of the letters seeming to advise the child to do the LGBTQ word. The letter C, for instance, is for “coming out.” “You’re ready to share,” the description says, “what you feel deep inside; it’s okay to be scared.” D is for “drag,” and its description also invokes a “you”: “You can strut and dance in clothes that you love: dresses, heels, or pants!” G — for “gay” — says, “This word’s just for you if you like someone and share their gender too.” L — for “lesbian” — says, “It’s love and affection between two girls who share a special connection.” Two little girls are pictured having a pillow fight together. Other words include “non-binary,” “pansexual,” which features a drawing of two little children decorating cookies together (“You connect with a vibe. No matter the gender, it’s about what’s inside”), and “trans” (“It’s a brave step to take to live with the gender that’s innate”).

Another example of the straight-up propaganda variety is 2019’s It Feels Good to Be Yourself: A Book About Gender Identity. “This is Ruthie,” the book begins. “She’s a transgender girl. That means when she was born, everyone thought she was a boy. Until she grew a little older — old enough to tell everyone that she’s actually a girl. Girl is Ruthie’s gender identity.” It continues its pedantic tone: “This is Ruthie’s brother, Xavier. Xavier is a cisgender boy. That means when Xavier was born, everyone thought he was a boy, and as he grew older, it turned out that everyone was right — he is a boy.”

Another category of books is one designed to explain away irregular situations in the lives of children with LGBTQ parents. 2020’s She’s My Dad!: A Story for Children Who Have a Transgender Parent or Relative falls into this category. “My Dad’s name is Haley,” the little girl in the book explains. “She used to be a he but now she is a she! Last year she did this thing called transition. She grew her hair long, painted her nails in bright colours and started wearing different clothes.”

LGBTQ activists are brazen with the ideology they put into their children’s books. They intend to make the children reading their books become part of the LGBTQ movement, base their understanding of family, love, and relationships around the brainless rallying cry “Love is love,” and see themselves as gendered, multi-gendered, or non-gendered spirits who happen to inhabit a body that may or may not match that spirit’s gender(s) — if it has a gender at all. And unfortunately, LBGTQ children’s authors have many librarians and teachers on their side who are waiting to pump out the latest and most egregious books to children.

Thankfully, there is an entire tradition of children’s books that tell meaningful stories and teach important moral lessons. You can find a list of some of those stories, put together by The American Spectator, here.