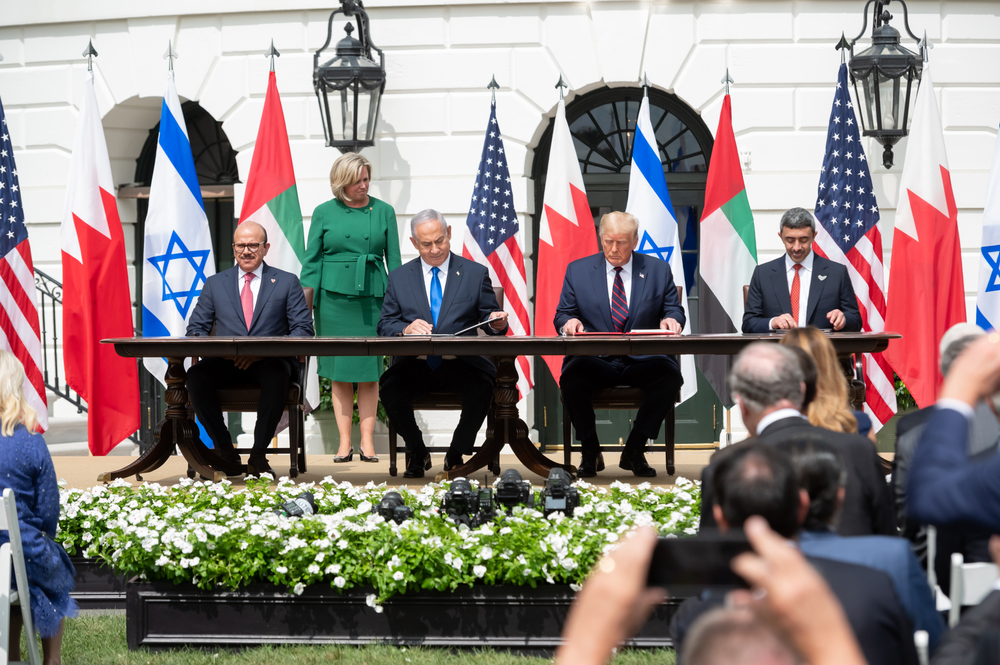 Friday marked the first anniversary since Israel and the United Arab Emirates issued a joint statement supporting normalized relations in the Abraham Accords. Since then, the Trump administration brokered three more normalization accords between Israel and Bahrain, Morocco, and Sudan. The Biden administration has to date brokered none.

In fact, the State Department continues to not mention the Abraham Accords by name, congratulating Israel and Morocco on the re-opening of Israel’s liaison office in Rabat by saying that “The United States will continue to work with Israel and Morocco to strengthen all aspects of our partnerships.”

But the Abraham Accords march on despite the Biden administration having nothing to show for it. Several developments have occurred this month alone.

Israel’s outgoing director of the Foreign Ministry’s Middle East Division admitted that his country has covert contacts with most Arab states, including Iraq, but not including Syria, Lebanon, and Yemen. According to Foreign Minister Yair Lapid, within two months, Israel and Morocco will upgrade their missions to embassies and establish full diplomatic relations, and within the next month, Israel will inaugurate its diplomatic mission in Bahrain. Israel and Morocco signed three cooperation agreements related to political consultations between the foreign ministries, air travel, and culture and sports.

The growth in diplomacy has yielded growing cooperation among the think tanks of the countries. The Abba Eban Institute for International Diplomacy signed a memorandum of understanding with the Bahrain Center for Strategic, International and Energy Studies (Deserat). The Jerusalem Center for Public Affairs signed a cooperation agreement with Derasat as well. The Jerusalem Center for Public Affairs stated that the aim of its cooperation agreement was “to establish a network of think tanks in the Persian Gulf,” and that together, Israel and Bahrain will fight Iran “in a war of ideas.” The chairman of Derasat also visited Israel’s Institute for National Security Studies.

On Iran, the signatories of the Abraham Accords are increasingly seeing eye to eye. Bahrain’s Al Khalifa admitted to “collaboration on the security front” with Israel, presumably against Iran, and he also met in Israel with an IDF senior official who deals with Iranian affairs. Lapid stated that ties between Israel, Egypt, Jordan, UAE, Bahrain, and Morocco serve to form a “pragmatic alternative to religious extremism” and establish a “cycle of life in the face of the cycle of death created by Iran and its emissaries.” In other defense news, Israel and Morocco continue to deepen their partnership in cybersecurity.

Israel exported almost $200 million in goods to the UAE, while importing over $370 million between September 2020 and June 2021. The Azerbaijan Investment Company signed a venture capital agreement with Israel’s OurCrowd. Azerbaijan is not a signatory of the Abraham Accords but a Muslim nation that has had ties with Israel for 30 years, and also recently opened a trade office in Israel.

Israel and Morocco are beginning to discuss partnerships on desert farming and aquaculture. Morocco has taken a keen interest in exporting food to Israel, while Israel seeks to export its agricultural technology to Morocco.

Over 230,000 Israelis have already visited the UAE from the time of the signing of the Abraham Accords only one year ago. Morocco hopes to host 200,000 Israeli tourists a year, up from 70,000 before the Abraham Accords (many Israelis visited Morocco via third countries). Bahrain promised Gulf Air flights to Tel Aviv this year, originally slated to begin in January but delayed due to COVID-19.

While Saudi Arabia has yet to sign onto the Abraham Accords, there have been positive developments in its growing détente with Israel. Saudi Foreign Minister Prince Faisal bin Farhan Al Saud indicated that his country would be warm to normalization: “We think, overall, the Abraham Accords have worked positively to spur engagement in the region, so in that sense, the decision by those countries can be viewed positively.” When asked, Faisal also did not affirmatively assert that Israeli-Palestinian peace was a precondition for Saudi normalization with Israel. Israel’s Regional Cooperation Minister Issawi Frej also stated that Israel is in contact with Gulf countries including Saudi Arabia on combating Iranian influence in the region. Saudi Arabia has also recently sentenced 69 people for being affiliated with Hamas and fundraising for it within the Kingdom in sentences ranging from three to 21 years.

It seems unlikely that the Biden administration will do anything positive to further the Abraham Accords. The administration continues to question the sovereignty of Israel in the Golan Heights, Jerusalem, Judea, and Samaria; inserts itself in landlord-tenant disputes in Sheikh Jarrah and Silwan; continues to support the poison pill that is the “two state solution”; and projects a lack of vision with its off-again, on-again position on arms sales to the UAE and its support of multiple counter-productive anti-Saudi policies. Regardless, the Abraham Accords’ signatories continue to reap benefits as they celebrate their first year as partners.