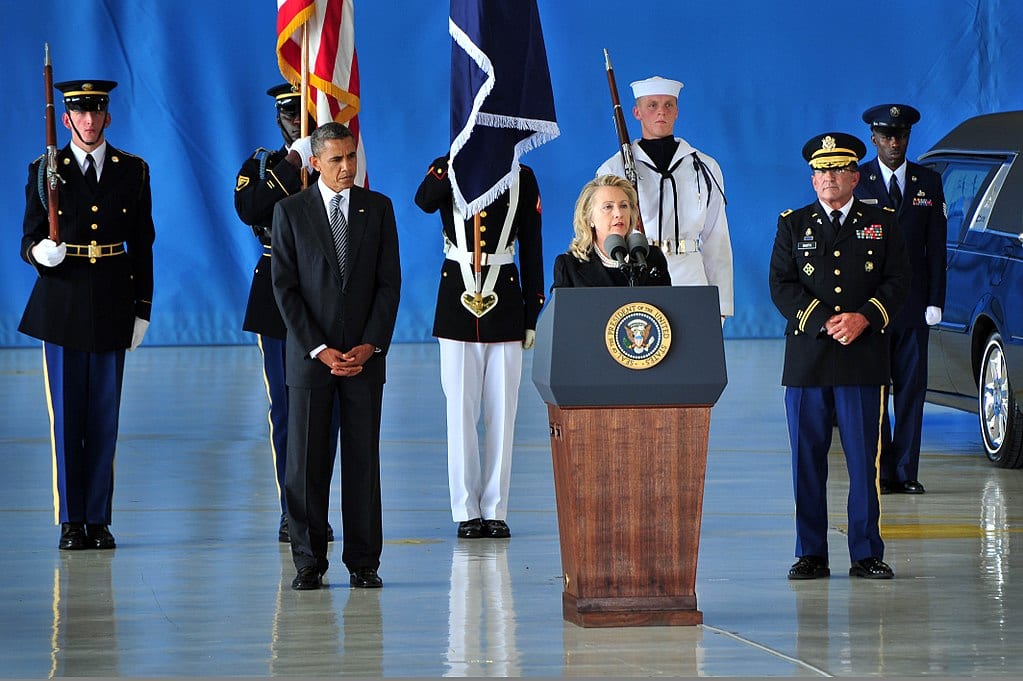 The given reason for Operation Iraqi Freedom was Saddam Hussein was believed to have a secret nuclear weapons program in violation of United Nations resolutions. There was also an unintended, yet positive consequence of the war. In December 2003, Libyan leader Muammar Gaddafi surprised the world and announced he would discontinue his country’s weapons of mass destruction program. Clearly, the Iraq War had hastened his decision to abandon rogue nation status.

Libya had been a pariah nation in the eyes of the United States since Gaddafi’s coup d’état in 1969. By the late 1990s, Gaddafi was slowly moving his nation in the right direction. In 1999, he agreed to meet U.S. and British demands to assume responsibility and pay restitution to the families of victims killed in the 1988 bombing of Pan Am Flight 103 over Lockerbie, Scotland. Dismantling his nation’s weapons of mass destruction program and inviting international inspectors into the country was a major step toward normalizing relations with the West and, most importantly, the United States.

Libyan authorities turned over weapons components and thousands of pages of documentation, which included correspondence with other nations. These papers revealed the name of A. Q. Khan, the Pakistani scientist who had been secretly transferring nuclear technology to Iran and North Korea, as well as Libya.

Relations between Libya and the United States were on the mend — until 2011.

By all accounts, President Barack Obama was reluctant to launch military action against Libya. Obama was a harsh critic of the Iraq War, and launching an unprovoked war against Libya would show him to be hypocritical. The Arab Spring, an uprising by groups of citizens against their governments, had spread to several Arab nations. A rebellion was brewing in Libya, and a protest broke out on February 17, but it was one Gaddafi’s security forces could probably manage.

It was Secretary of State Hillary Clinton who was the most forceful proponent of the United States initiating a war with Libya. Most of Obama’s senior advisers urged the United States to sit this one out. Clinton, however, “doubled down and pushed for military action” against Libya. Clinton won over Obama. Ironically, the nation’s top diplomat was the biggest advocate for war. The United States began attacks on March 19, 2011.

It is widely believed that the driving motivation for Clinton’s push to attack Libya was to beef up her résumé in preparation for a 2016 run for the White House. It was Clinton’s insistence that the Libya campaign was a resounding success that set in motion events leading to the biggest and most deadly debacle for U.S. personnel in Libya.

Gaddafi was toppled from power by a U.S.-led bombing campaign, joined by Britain and France. An Obama adviser insisted the U.S. was “leading from behind.” Gaddafi was captured and gruesomely killed by rebel fighters on October 20, 2011. Cellphone video footage showed a long rod, or possibly a sword, was shoved up his rectum. The Libyan leadership vacuum created by Gaddafi’s death was filled throughout much of Libya by Ansar al-Sharia and al-Qaeda in the Islamic Maghreb. These were two powerful, radical Islamic terror groups.

J. Christopher Stevens was the U.S. ambassador to Libya. Stevens’ primary diplomatic post was in the Libyan capital city of Tripoli. But he was frequently at the lightly defended facility in Benghazi, which was a hotbed of violence. Stevens was directed to spend more time in Benghazi because “Secretary Clinton wanted the post made permanent,” according to Gregory Hicks. Hicks was the U.S. deputy chief of mission, the de facto No. 2 diplomatic position in Libya. Hicks later testified before Congress that Clinton had intended to make a December 2012 announcement about the diplomatic upgrade in Benghazi.

The reality was far different from the picture being painted by Clinton. The security situation in Benghazi was extremely dangerous and getting worse by the day. In April 2012, an improvised explosive device was thrown over the wall into the U.S. consulate compound. Other attacks were made against the British ambassador, the Tunisian consulate, and against United Nations and International Red Cross officials. In June, a bomb blew a gaping hole in the security wall of the American Benghazi compound. The deteriorating security situation caused the British government to withdraw its diplomatic personnel and close its Benghazi offices in June.

Late in the evening of September 11, 2012, 11 years to the day after the 9/11 terrorist attacks, the Benghazi compound came under attack from a large group yelling, “Allahu Akbar!” The compound wall was quickly breached, and scores of attackers entered, firing automatic weapons and rocket-propelled grenades. Ambassador Stevens and consular officer Sean Smith were quickly killed.

Hours later, the annex housing CIA officials and CIA-contracted security personnel came under a mortar attack. Glen Doherty and Tyrone Woods were killed. Frantic calls were made to Washington, D.C., during the attack requesting reinforcements. No reinforcements were sent.

Back in Washington, D.C., emails were flying back and forth discussing the attack. Officials at the White House, State Department, and CIA knew it was full-out assault by Islamic terrorists. In fact, Clinton emailed her daughter the evening of the attack, telling Chelsea that the perpetrators were Islamic terrorists. But another narrative was crafted to tell the public a completely different story.

The day after the attack, the Obama administration falsely claimed that the attack had been spontaneous. The administration claimed the attack grew from the peaceful protest to a crudely made YouTube video named “Innocence of Muslims” that was considered demeaning to Muslims. That video was posted to YouTube months earlier and, at the time of the attack, had been viewed only a few dozen times. As a flurry of White House emails, memos, and messages confirmed, the Obama administration knew from the very beginning that the video was not the cause of the attacks. That public claim was quickly debunked.

The White House dispatched Susan Rice, the U.S. ambassador to the United Nations, to make the rounds of Sunday news talk shows promoting the falsehood that the attack was a spontaneous event. Libyan officials and the suspected organizer of the attack, Ahmed Abu Khattala, said the video played no role in the attack. The attack, they said, was premeditated. Obama administration officials did not offer an explanation as to why peaceful protestors would be carrying rocket-propelled grenade launchers and automatic weapons.

At about 6 a.m. on September 12, an armed, 50-vehicle Libyan convoy rescued the Americans from the annex and safely transported them to the Benghazi airport for evacuation. These Libyan rescuers were not from the transitional government aligned with the United States. In a bit of sad irony, these Libyans were former military officers loyal to Gaddafi. The individuals that the United States had ousted from power about a year earlier were the very ones that came to U.S. assistance.

It wasn’t until September 20, nine days after the attack, that the Obama administration finally acknowledged the YouTube video explanation was untrue. White House Press Secretary Jay Carney grudgingly admitted the facility came under a premeditated attack from Islamic terrorists.

Six years after the YouTube video explanation was thoroughly discredited and Carney’s admission that the video claim was untrue, White House staffer Ben Rhodes, in his 2018 memoir, returned to falsely claiming the video was the cause of the attack.

Retired Ambassador Thomas Pickering and retired Admiral Mike Mullen chaired the Accountability Review Board (ARB) that investigated the attack. The board found plenty of blame to go around, including U.S. personnel in Libya who “did not demonstrate strong and sustained advocacy with Washington for increased security,” and the “relatively inexperienced, American personnel” on that overseas assignment.

The board further found “certain senior State Department officials within two bureaus demonstrated a lack of proactive leadership and management ability in their responses to security concerns … [but] did not find reasonable cause to determine that any individual U.S. government employee breached his or her duty.” Interestingly, the board’s claim that U.S. personnel in Libya didn’t push hard enough for increased security is contradicted by its subsequent claim that State Department officials didn’t respond adequately to such requests.

The ARB report was dismissed as sloppy and incomplete. The board didn’t interview many key witnesses with deep knowledge of the attack. Some who were questioned by the panel said the probe was inadequate. The board demonstrated its lack of independence by consulting with Clinton’s chief of staff on which witnesses should and should not testify. Shockingly, the board never even questioned Clinton. Perhaps this was because four of the five board members were appointed by her.

Mark Hyman is an Emmy award-winning national investigative journalist.  This essay was adapted from his just-released book Washington Babylon: From George Washington to Donald Trump, Scandals that Rocked the Nation.