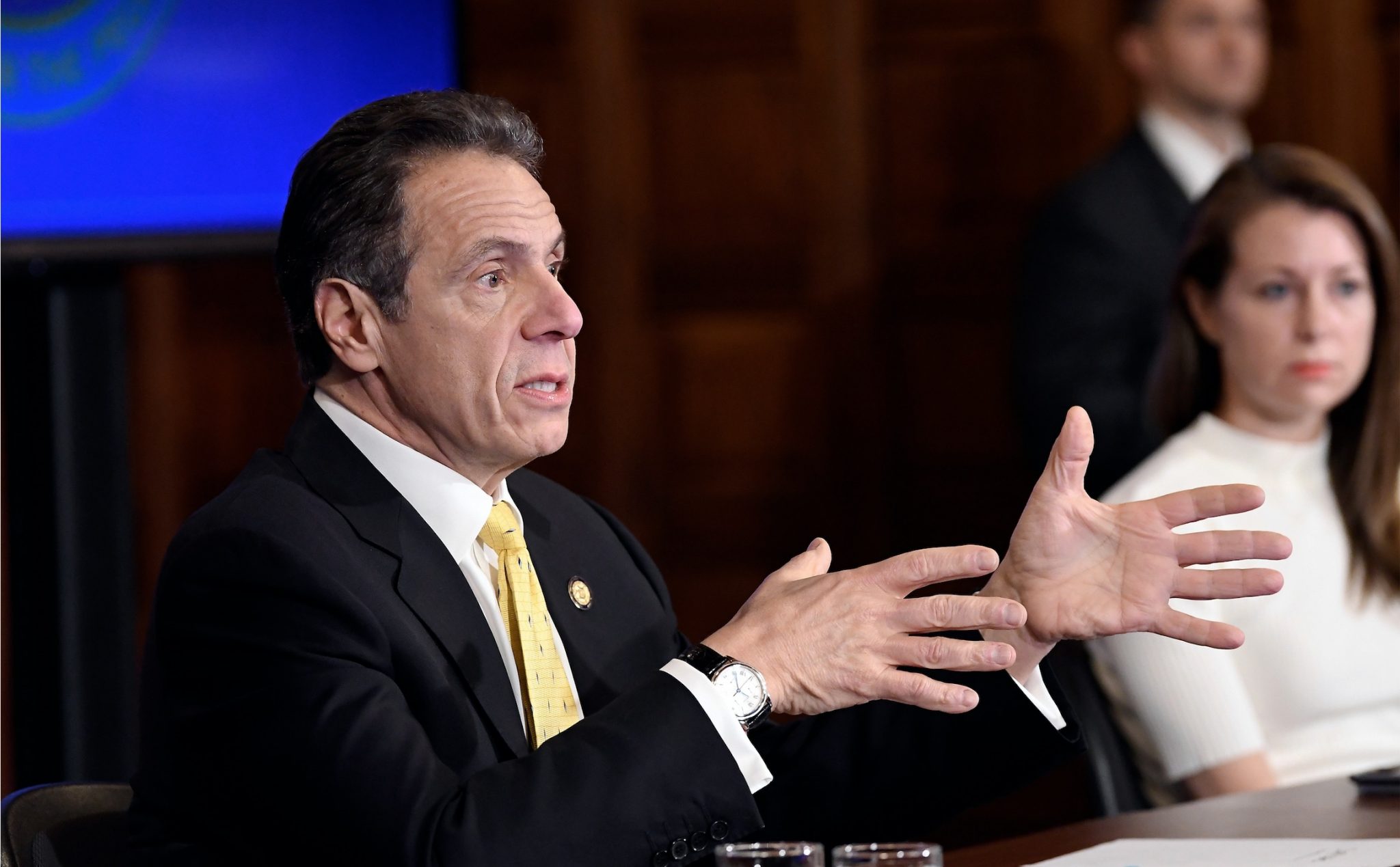 Every day, cable-news channels provide live coverage of New York Gov. Andrew Cuomo’s briefings about his state’s response to the coronavirus pandemic. What has happened in New York is not merely the worst COVID-19 outbreak in America, but possibly the worst in the entire world. Such are the biases of our news media, however, that no one ever suggests Cuomo is responsible for the deadly toll of this disease in his state. Instead, the Democratic governor is treated with deference by the press corps, which instead — and rather illogically — focuses the blame on President Trump.

Watching Cuomo’s press briefings is to behold the work of a master in the rhetorical arts of pretended expertise and straw-man arguments against imaginary antagonists who, in opposing the governor’s orders, are irresponsible and unscientific. Cuomo employs a vocabulary (e.g., “evidence,” “research,” “transmission rate”) that conveys an advanced knowledge of epidemiological science, which, of course, he does not possess. His audience is expected to forget that, just a few weeks ago, the governor was warning of a shortage of health-care resources based upon computer-modeled projections that proved to be grossly exaggerated (“The Wrong Numbers,” April 6). Journalists seem willing to pretend that Cuomo’s near-hysterical warnings in March about an emergency need for 30,000 more ventilators were entirely sensible. At the time, the media was scornful of Trump’s skepticism about this speculative need, but events have proven the president was right and Cuomo was wrong. By the second week in April, the total number of coronavirus hospitalizations in New York peaked near 18,000, and fewer than 6,000 of those patients were on ventilators, so that the governor’s earlier prediction was at least five times greater than the actual need.

New York’s emergency became Trump’s problem through some mysterious mechanism of media magic, by which everything bad is blamed on the Republican president, while Cuomo and other Democratic officials are always blameless. No matter how wrong Cuomo has been in the past, practically no one in the press corps is willing to challenge his pretended expertise as he speaks authoritatively about how relaxing restrictions on business activity will affect infection rates. “Take an action, monitor,” the governor said Sunday, unveiling his slow-motion “phased plan to re-open” his state: “Two weeks that’s, according to the experts, the incubation period of the virus so you can actually see if you had an effect where you increased the rate of infection which you would then see in hospitalizations, testing, et cetera. Everyone understands the overall risk that you start to increase activity, the infection rate goes up, two weeks to actually do that monitoring.” Notice the omniscient certainty in Cuomo’s assertion that an increase of activity would automatically produce more infections and thus more hospitalizations. Perhaps this is true, or maybe not, but there is never room for doubt when Saint Andrew of Albany issues his oracular prophecies. As far as anyone watching CNN or MSNBC knows, Cuomo is the Apostle of Epidemiology, from whom America receives the Gospel of Mitigation.

In fact, New York’s COVID-19 pandemic passed the crisis stage three weeks ago, when the daily number of new hospitalizations reached the “apex” of the “curve,” to use the language popularized by Cuomo. What has been almost completely forgotten since mid-March, when most of the nation went into lockdown quarantine mode, is that the purpose of this “mitigation” effort was to prevent our hospitals from being overwhelmed with a patient load that exceeded capacity. That system-crashing disaster never happened, not even in New York, as the “curve” of the pandemic ascended. It is difficult (if not entirely impossible) to see how such a crisis could happen at any point in the future, even if Cuomo and every other governor rescinded their lockdown orders tomorrow.

It is now reasonably certain America’s hospitals could cope with any future increase of coronavirus cases, but the goal posts of “mitigation” have been moved. The graphics that Cuomo shows in his daily PowerPoint presentations bear the slogan: “Stay home. Stop the spread. Save lives.” We cannot entirely “stop the spread” of a contagious virus, however, because staying home is not an option for everyone. There is no such thing as zero risk in a pandemic, but Cuomo conveys the impression that people can “save lives” by accepting mandatory lockdowns indefinitely, despite the fact that the original goal of these mandates — to prevent case-loads from exceeding hospital capacity — has already been achieved. The media pretend this goalpost-shifting never happened, playing along as Cuomo suggests that anyone ready to end government-mandated lockdowns is a dangerous fool.

Contrary to what Cuomo preaches from his political pulpit, however, there are entirely scientific reasons to believe continued “mitigation” will yield diminishing returns. Michael Fumento, who covered the science beat for more than three decades, explained in late March that the rise and fall of COVID-19 was entirely predictable by “what’s called ‘Farr’s Law,’ which dictates that all epidemics tend to rise and fall in a roughly symmetrical pattern or bell-shaped curve”:

Importantly, Farr’s Law has precious little to do with human interventions such as “social distancing” to “flatten the curve.” It occurs because communicable diseases nab the “low-hanging fruit” first (in this case the elderly with comorbid conditions) but then find subsequent victims harder and harder to reach. Until now, more or less, COVID-19 has been finding that low-hanging fruit in new countries, but the supply is close to running out.…

When the coronavirus epidemic ends and the public-health zealots inevitably slap themselves on the back for having prevented the nightmare scenarios they themselves cooked up, don’t buy it. This isn’t to say that thorough hand-washing several times a day and not sneezing and coughing in others’ faces won’t help: It will. But the authoritarian and economically devastating measures taken by the United States and other countries are wrecking the world economy.… Coronavirus has not emptied our streets; government dictates have.

Nothing that has happened since then has contradicted what Fumento wrote a month ago, yet credulous faith in the Gospel of Mitigation persists, even as Cuomo’s prophecies prove false. And somehow, Cuomo is not held accountable for the staggering coronavirus death toll in New York. The media weeks ago decided that Trump was wholly responsible for this Chinese disease, a belief to which journalists cling with quasi-religious certainty. Conferring scientific sainthood on Cuomo is integral to the process of demonizing the president and his Republican supporters. If you accept the liberal media narrative, you might almost believe that the health of New Yorkers is threatened by the behavior of GOP-voting anti-science yokels in rural states.

Were it not for the protection of Saint Andrew of Albany, the media narrative implies, New York would be overrun by Bible-thumping Republican yahoos from Iowa or Oklahoma, spreading a disease caused by the Trump virus. Facts don’t matter if they contradict the media’s worldview, in which voting Democrat is evidence of superior intelligence and moral virtue. New Yorkers voted overwhelming against Trump; Hillary Clinton carried the state by a margin of nearly 22 points, and even more in New York City, where Clinton got 87 percent of the vote in Manhattan, 80 percent in Brooklyn and 89 percent in the Bronx. It is therefore predictable that New Yorkers eagerly accept a blame-Trump explanation of the coronavirus pandemic, but the rest of us are entitled to reasonable doubts.

New York’s COVID-19 catastrophe is without equal anywhere else in America. As of Sunday evening, more than 22,000 New Yorkers had died from the disease, approximately 40 percent of all U.S. coronavirus deaths. The per-capita death rate in New York (1,135 per million residents) was nearly seven times higher than the overall U.S. rate. New York’s per-capita coronavirus death rate is almost 13 times higher than the rate in Georgia, where Republican Gov. Brian Kemp has become controversial as one of the first governors to end statewide lockdown orders. Given that the outbreak in Georgia is about 92 percent less severe than in Cuomo’s New York, why should Kemp be vilified for returning his state to business as usual? The media offer no explanation or context for this, instead serving up headlines like “Black leaders say reopening Georgia is an attack on people of color” (CNN) and “Georgia’s Kemp neglected to warn people about his dangerous gamble” (MSNBC).

None of these reports compared Georgia to New York, because such a comparison would not support the halo over Cuomo’s holy head. Georgia’s peak daily number of COVID-19 deaths was 41 on April 14, the same day New York recorded 778 deaths. On Sunday, Georgia reported four new deaths from the virus, while New York reported 367. How is Kemp engaged in a “dangerous gamble,” when Georgia’s numbers are a tiny fraction of New York’s? To ask such a question is heresy to the media cult, which worships at the shrine of Saint Andrew of Albany.