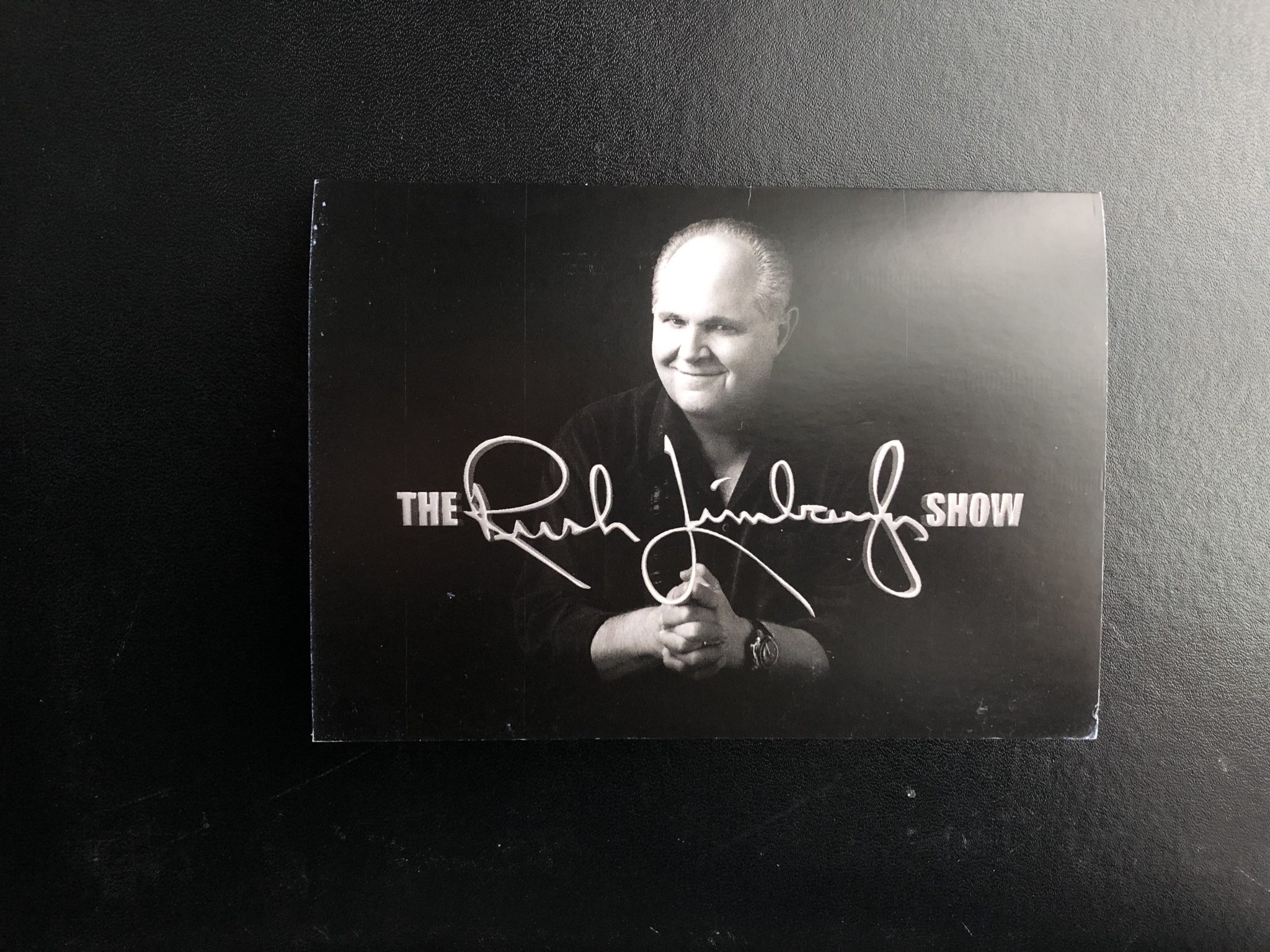 Every so often, there’s a public figure who looms so large in your life that the news of his or her death wrings your heart out. You feel their absence deeply. It’s personal. That’s how many conservatives feel at the news of Rush Limbaugh’s passing.

His reassuring voice filled my kitchen and millions of other kitchens, offices, and cars daily, from noon till 3:00 p.m. The new radio silence that will now occupy those spaces will be deafening.

As Mark Stein characterized it on Tucker Carlson’s show the other night, radio is a very intimate medium. And with Rush, it was always personal. People could connect with him. He never judged his callers, he didn’t use big words, he didn’t speak to affirm his own intelligence. He just talked like he would to a long-time friend. He connected to people on a basic, fundamental, human level, like the way Billy Joel describes in “Just the Way You Are”:

I don’t want clever conversation,
I never want to work that hard.
I just want someone that I can talk to.

With Rush, you never had to work hard. Anyone could call in and just start talking to him. And he’d talk back.

It was always that way with Limbaugh, or the “Titular Head of the Remains of the Republican Party,” as he jokingly called himself. Always anti-Establishment, he truly was “America’s anchorman.”

You could see it in the way he dealt with his callers. He took everyone seriously, no matter how rude they were, or how politically unversed they came off, and he engaged with all of his listeners on an intellectual level to answer their questions. His famous “Open Line Fridays” were direct evidence of how eager he was to address America’s interests and ideas, despite the often meaningless melodrama consuming the Beltway.

I had the privilege of speaking to Rush on his radio program about three years ago. I called in to Open Line Friday one day in January during my sophomore year of college. I was concerned about the stance that then President Trump had taken on immigration — it seemed he would concede on amnesty and offer 1.8 million “DREAMers” citizenship in order to pass a bipartisan bill with the Democrats.

After 45 minutes of hitting the call-back button on my phone and hearing the ensuing tormenting buzz of the busy signal, a voice startled me. “Hello this is the Rush Limbaugh Show. What is your question?” asked a gruff and to-the-point masculine voice on the other end of the phone. After so many attempts to reach the show, I was shocked that the other side of the dial tone existed.

Bo Snerdley waited for my response. Suddenly, my stomach leapt into my throat, and I could barely squeak out my name, age, and that I was a college student at a small conservative Christian school in a town in western Pennsylvania he’d probably never heard of. I got to my question, too. I relayed to Mr. Snerdley my concerns about the president. I was already on edge about a “New York liberal,” as Sen. Ted Cruz termed him, being the new leader of the GOP.

Maybe it was the unusually high-pitched or frantic out-of-breath voice that he felt compassion for, but whatever it was, Mr. Snerdley’s tone lost its suspicion and responded with a new softness, or understanding perhaps. He asked that I stay on the line. He cut out. Next thing I know, he cut back in and told me that I was next on the show.

At that point the back corner of the common room of the girl’s dormitory in which I was sitting seemed suddenly completely exposed. When I decided to call Rush I had scouted out the most uninhabited and quiet location I could find. If even the hum of the heat kicking on or a word of some stranger’s conversation were overheard from my side of the line, I didn’t think I’d be able to recover from being complicit in such a heinous impropriety committed over the airwaves of the most-listened-to political talk show on the planet.

I’m pretty sure at that point I was sweating.

I was on hold for what felt like an eternity. The caller before me was also young and was engaged in a heated debate with Rush about some tenet of conservatism. And she wasn’t shy, either. Of course, he handled her call with his usual aplomb and good manners. He sparred with her as an equal. All the same, I’m sure Rush was apprehensive about taking more heat from his next young caller.

Before handing over the golden EIB mic, so to speak, Rush introduced me. He emphasized that I was only 19 years old. He listened patiently and politely as I attempted to convey in full sentences my concerns to this giant of talk radio and his tens of millions of listeners. He didn’t treat me with kid gloves or address me like most people of his stature and experience might address an uncertain teenager. He took my question as seriously as if it were from someone of his own political acumen and intellectual level. He dedicated around 15 minutes to fully address my concerns. During a commercial break, Mr. Snerdley even checked in on me to make sure I was still hanging on. He too was calm and gracious like Rush.

When Rush came back from commercial, he asked if I was still there. “I want to run something by you and I’m glad you held on, because I want to run it by you with you on the phone,” he said.

Rush then explained his theory. He envisioned that Trump’s political strategy would actually end up working out in conservatives’ favor by proving just how full of animosity the Left was, that they could not even overcome their hatred of the bad orange man for a second, even if he was, though only for a brief moment, willing to concede to their policy demands.

Rush, in his characteristic good-spiritedness and optimism, was confident that this wasn’t a time for conservatives to lose hope.

“I actually think I should shut up here. I may be giving away too much of the game here to these dingbats,” he said.

Rush then asked for my evaluation of his take on the situation. As a sophomore political science major, I felt utterly unworthy to offer my grand poli-sci 101-level political analyses or critiques to the king of conservative talk radio. But that points to the kind of man Rush was: he was genuinely interested in the average American’s opinions on the political goings-on of the nation. He believed we counted. How awfully American and democratic of him.

Rush gave a perspective on Trump that I hadn’t yet heard. And I told him that I agreed. In all likelihood, the author of The Art of the Deal could very well be concocting a well-thought-out ploy to expose to the American people the true colors of his political adversaries.

Rush seemed taken aback by my concession. Maybe he expected an automatic combativeness to counter his defense of the bad orange man. After all, Rush was constantly under fire from the Left.

“We’ll just have to wait and see!” he asserted.

Rush then asked me a question: “Since you were so smart, and since you have remained so open to all possibilities … Would you like a new iPhone? I feel in the mood to give iPhones away today. You young people inspire this in me.”

Now it was my turn to be shocked. I’d caught Rush in one of his rare Apple-giveaway moods. He asked what the model of my current iPhone was and determined that he should send me the new iPhone X, which had been released not long beforehand. He explained to me, while still on the air, how to set it up at AT&T.

“Tell them it was a gift,” he said. He made sure I stayed on the line so Mr. Snerdley could record my address to send me my “cute bundle of stuff.”

Rush’s generosity stunned me. I looked it up — the retail cost of that iPhone was over $1,000. He sent me the model with the highest storage capacity. For a girl he talked to over the phone for not even 20 minutes. I don’t know about you, but I’ve never given so much to someone I knew so little. That’s the kind of man Rush was, always giving. And that’s what he was all about, when you think about it. He spent his life giving hope and perspective to the American people, to those who were underrepresented in the media and popular culture. It was so obvious that Rush’s actions were grounded in his love of other people, even strangers.

That’s why he had such a massive base of “Dittoheads.” America listened to Rush, and Rush listened to America. So many in his audience don’t normally have a voice, either. Many are in the MAGA camp. They’re from rural America — “those people” — people whom inhabitants of the Beltway might dismiss as backwoods hicks. Nobodies. Rush knew these people counted, just like everyone else. Like them, he threw his hat in with Trump, the voice of the voiceless, the anti-Establishment hero.

Rush was an ideological rock to conservatives. He lent his listeners stability. That’s what will make his loss so devastating to the Right. He gave hope, every day, no matter what. There was no excuse for giving up hope.

I treasure my “Rush phone,” which I use every day, and it’ll be the only iPhone that I hold onto and don’t trade in when it’s time to update to the next, shinier piece of technology. I know no matter what, even after it stops working, my Rush phone will always be my favorite. Because no matter what comes next, there are some things and some people in this world that your heart will always hold out for.