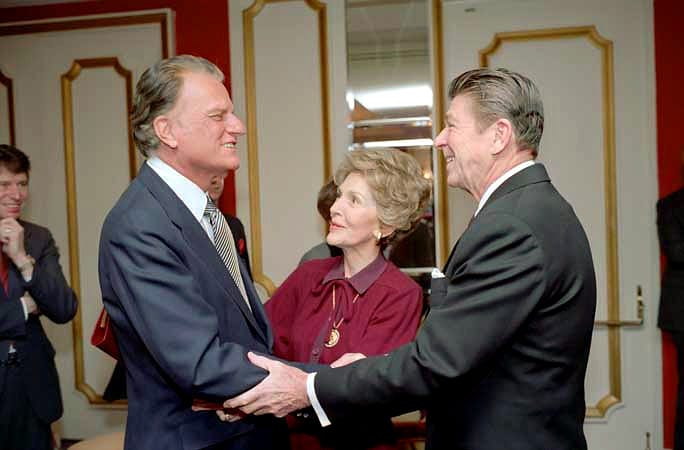 In a modern world of dispiriting news, I offer for your perusal something uplifting. It’s an edifying letter from August 1982, found only recently, written by a great man and great president.

Credit goes to Karen Tumulty, who discovered the letter within the personal keepsakes of Nancy Reagan. Tumulty, a journalist, is writing a biography of Mrs. Reagan. She came across the letter in a cardboard box of Nancy’s cherished memories. The letter is nothing short of a deathbed intervention by President Ronald Reagan, reaching out to his atheist father-in-law, Loyal Davis, who Reagan liked and respected, and whose soul he was gravely concerned about.

I knew about this intervention by Reagan. I had written about it in a book on Reagan’s faith published in 2004. Tumulty, however, has found the actual letter, and what it says is inspiring.

Tumulty marvels that Reagan, who held the most difficult job in the world, would have paused in the middle of his day, August 7, 1982, to write a four-page letter like this on White House stationery. She might be surprised to learn that Reagan sat down to pen letters like this throughout his presidency and his gubernatorial years. Reagan scholars estimate that our nation’s 40th president may have written more letters than any president since Thomas Jefferson.

I have read hundreds of them. During my first of many summers doing research at the Reagan Library, I was blown away by the sheer volume of letters Reagan produced, and how meaningful they were. There remain many unmined gems in that treasure trove of Reagan correspondence. In the summer of 2001, I resolved to read through all the letters during my next summer’s research. I made it only about half-way through 1982. Some of the most moving Reagan missives were directed to complete strangers, like Ruth Smith of Coeur d’Alene, Idaho. And to think that liberals in the 1980s portrayed Reagan as a dawdling, doodling old fool who slept through workdays at the White House — when not amusing himself with VHS tapes of Bedtime for Bonzo. The left’s scurrilous caricature of Reagan was scandalous.

As for this letter to Loyal Davis, it’s yet another testimony of Reagan’s thorough decency and ever-present concern for the literal eternal dignity of people. He was concerned not merely about the perils of evil empires, but the perils of individual souls. I will not quote the full letter here, but I’d like to call attention to one particular passage, which is consistent with what I saw years ago. In one section of the letter to his dying father-in-law, Reagan tried this Christian apologetic:

Some seven hundred years before the birth of Christ the ancient Jewish prophets predicted the coming of a Messiah. They said he would be born in a lowly place, would proclaim himself the Son of God and would be put to death for saying that.

All in all there were a total of one hundred and twenty three specific prophesys [sic] about his life all of which came true. Crucifixion was unknown in those times, yet it was foretold that he would be nailed to a cross of wood. And one of the predictions was that he would be born of a Virgin.

Now I know that is probably the hardest for you as a Dr. to accept. The only answer that can be given is  —  a miracle. But Loyal I don’t find that as great a miracle as the actual history of his life. Either he was who he said he was or he was the greatest faker & charlatan who ever lived. But would a liar & faker suffer the death he did when all he had to do to save himself was admit he’d been lying?

The miracle is that a young man of 30 yrs. without credentials as a scholar or priest began preaching on street corners. He owned nothing but the clothes on his back & he didn’t travel beyond a circle less than one hundred miles across. He did this for only 3 years and then was executed as a common criminal.

But for two thousand years he has had more impact on the world than all the teachers, scientists, emperors, generals and admirals who ever lived, all put together.

Before digging into the roots of Reagan’s theological thinking, I’d like to share another such example. On March 1, 1978, Reagan sent a similar epistle to a Methodist minister from Shell Beach, California who was having doubts about the divinity of Christ (a rather odd predicament for a pastor). This liberal minister accused Reagan of a “limited Sunday school level theology,” and Reagan responded — characteristically — not with vitriol but grace:

Perhaps it is true that Jesus never used the word “Messiah” with regard to himself (although I’m not sure that he didn’t) but in John 1, 10 and 14 he identifies himself pretty definitely and more than once.

Is there really any ambiguity in his words: “I am the way, the truth and the life: no man cometh unto the Father but by me?”… In John 10 he says, “I am in the Father and the Father in me.” And he makes reference to being with God, “before the world was,” and sitting on the “right hand of God.”…

These and other statements he made about himself, foreclose in my opinion, any question as to his divinity. It doesn’t seem to me that he gave us any choice; either he was what he said he was or he was the world’s greatest liar. It is impossible for me to believe a liar or charlatan could have had the effect on mankind that he has had for 2000 years. We could ask, would even the greatest of liars carry his lie through the crucifixion, when a simple confession would have saved him?… Did he allow us the choice you say that you and others have made, to believe in his teachings but reject his statements about his own identity?

It was the same tack he used with Loyal Davis. In fact, Reagan frequently used this approach, privately and publicly. He employed it in several letters, as well as in self-written nationally syndicated radio addresses (for example, Christmas 1978).

And what of the roots?

Many readers will immediately recognize here an echo of C. S. Lewis’s formulation in Mere Christianity, best known as his classic “liar, Lord, or lunatic” argument.

Lewis advised people against taking that “really foolish” position that people often take about Christ: “I’m ready to accept Jesus as a great moral teacher, but I don’t accept His claim to be God.” Lewis protested:

That is one thing we must not say. A man who was merely a man and said the sort of things Jesus said would not be a great moral teacher. He would either be a lunatic — on the level of the man who says he is a poached egg — or else he would be the Devil of Hell. You must make your choice. Either this man was, and is, the Son of God: or else a madman and something worse. You can shut him up for a fool, you can spit at Him and kill Him as a demon; or you can fall at His feet and call Him Lord or God. But let us not come with any patronizing nonsense about His being a great human teacher. He has not left that open to us. He did not intend to.

With his usual wit, Lewis confronted the popular assertion by some non-Christians that Christ should be recognized as a “great person” or “great teacher” or “great philosopher” but not as God or the Son of God. Lewis maintained that to assert that Christ was not the Son of God but still a great man is contradictory. Such a great man would be the greatest and most successful liar in human history, providing endless millions, even billions, with a false security and phony sense of salvation.

As for Reagan invoking Lewis, this tells us several things about the late president.

First, he went deep to help friends, loved ones, even strangers on matters of faith and conversion, whether in his private life or as governor of California or president of the United States. He considered this very much worth his time. Reagan’s faith wasn’t some shallow or passing interest. And clearly, Reagan not only read C.S. Lewis but internalized the renowned Englishman’s teachings. (As president, Reagan made open references to Lewis, including in the Evil Empire speech, and notably to the “Screwtape Letters,” which Reagan hailed as “unforgettable.”)

But above all, this latest Reagan disclosure, 36 years after it was written, and a decade-and-a-half after the man’s own rendezvous with the afterlife, further reveals a genuinely decent man worried about the souls of others. Here was a president engaged not only in statecraft in dealing with an atheistic empire, but in soulcraft in dealing with the eternal well-being of people like his atheistic father-in-law.