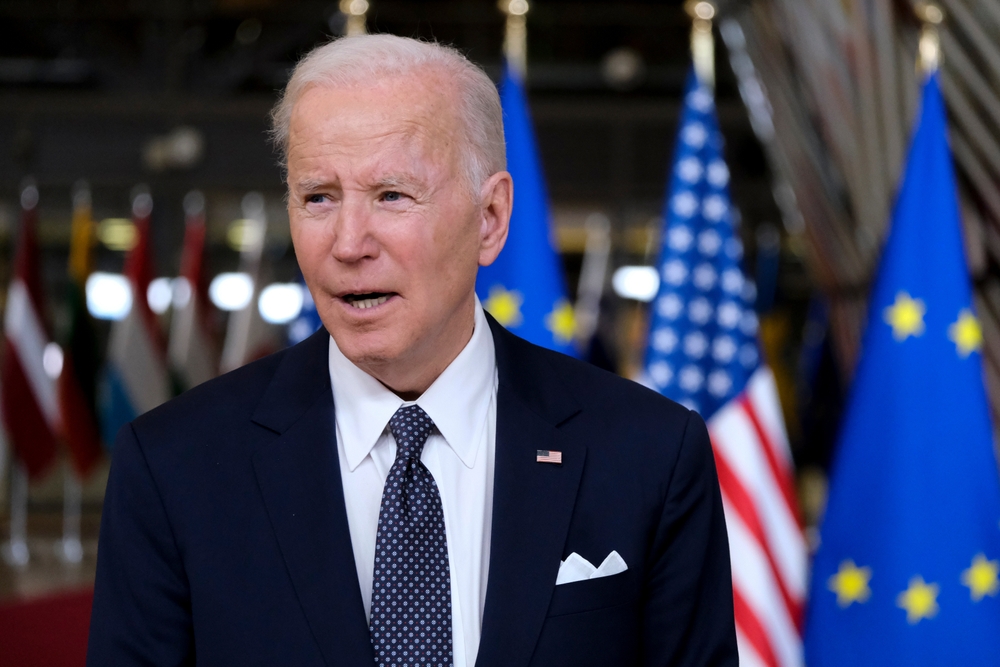 It is difficult, perhaps impossible, to describe just how bad President Joe Biden is at his job. Comparisons to Jimmy Carter are pervasive, but trite — and too flattering to Carter. Perhaps a more apt (and dark) analogy, given how civic strife has reached a fever pitch, is James Buchanan, historians’ typical consensus pick for worst president ever.

Indeed, to fully capture the absolute horror that is this senile near-octogenarian’s presidential swan song would be a Herculean task, better suited for a David McCullough–style biography than a column. But for present purposes, and despite the difficulty of narrowing down from such a vast sample size, consider a few examples from recent months.

In late March, in a combative speech in Warsaw, Biden veered off-script and announced that Russian kingpin Vladimir Putin “cannot remain in power.” There is a sordid history of such meddlesome talk when it comes to U.S. foreign policy, encapsulated by John Bolton’s shockingly candid on-air admission to Jake Tapper this week that he has “helped plan coups d’etat.” Biden, in Poland, thus explicitly called for regime change against the long-standing leader of a nuclear-armed hegemon. As the writer David P. Goldman immediately pointed out, multiple generations of Cold War-era U.S. presidents knew to never so explicitly provoke the Kremlin. The White House immediately — and implausibly — attempted to walk back, and downplay, Biden’s clarion utterance.

In May, for the third time in under a year, the White House similarly had to walk back a Biden claim about the U.S.’ willingness to go to war to defend Taiwan against a possible — perhaps impending — People’s Liberation Army invasion. During a joint press conference with Japanese Prime Minister Fumio Kishida, Biden was asked point-blank if Uncle Sam would defend Taipei if Beijing invaded. Biden answered “yes” — botching the actual commitment the U.S. made in the Taiwan Relations Act of 1979, under which the U.S. is merely required to provide prophylactic defensive resources to Taipei, not to actually defend it in the event of an invasion. A mealy-mouthed White House statement tried to walk it back, but the damage was done. Biden had also made virtually identical comments last August and October; turns out the adage about not being able to teach an old dog new tricks is true.

This week, Biden touched down in Israel for the first Middle East trip of his presidency. Upon landing at Ben Gurion Airport, Biden stepped off Air Force One and quickly asked his aides, “What am I doing now?” Shortly thereafter, Biden stumbled his way to a microphone and pronounced his desire to “keep alive the truth and honor of the Holocaust.” The following day, during a joint press conference with Israeli Prime Minister Yair Lapid, Biden alluded to a “list” of preapproved — and presumably friendly — reporters that his team had prepared for him beforehand. This was less than a week after an embarrassing flub back in Washington, when Biden read off a teleprompter, Ron Burgundy–style: “end of quote, repeat the line.” And that was just a few weeks after the president fell off a stationary bicycle.

These are not mere frivolous “gaffes,” the sort of thing one can laugh off. These are horrific misstatements with harrowing diplomatic and geopolitical implications, at best, and indications of a palpable senility, at worst. There is something very, very clearly wrong with the president of the United States. Even the New York Times, which for former Biden boss Barack Obama functioned as Democratic Party Pravda, ran a recent piece entitled, “At 79, Biden Is Testing the Boundaries of Age and the Presidency.” A mere three days later, Michelle Goldberg, a reliably progressive columnist for the Gray Lady, entitled her own column “Joe Biden Is Too Old to Be President Again.” (READ MORE: No, No, No. Down With the Biden Ship You Go.)

The fix is clearly in.

The doddering dolt from Delaware currently boasts a 38.7 percent average job approval rating in the oft-cited RealClearPolitics average, placing him a whopping 17.2 percent underwater. That 38.7 percent number is historically low for this juncture of a presidency, in the modern history of opinion polling. Perhaps that abysmal statistic is partially explained by another historic number: the 9.1 percent annualized consumer price index inflation increase last month, itself a four-decade high. And inflation is hitting extremely popular foods very hard: Eggs are up 33.1 percent annually, butter 26.3 percent, and chicken 18.6 percent. Average national gasoline prices are now at an all-time high. Joe Biden, the onetime hardscrabble “working man” from Scranton, Pennsylvania, has overseen catastrophic inflation, disproportionately harming the very lower- and middle-income voters his political party purports to care about.

At this point, with even the Times turning on him, Biden is not going to be the Democrats’ presidential nominee in 2024. The only relevant question is whether he should resign right now. He should. Because as dangerous as Kamala Harris would be as president, she would at least be mildly less likely to let her tongue slip us into World War III.