by Doug Bandow
Stoning of St. Stephen fresco (1896) by S. G. Rudl in the Church of Saints Cyril and Methodius in Prague, Czech Republic (Renata Sedmakova/Shutterstock.com) 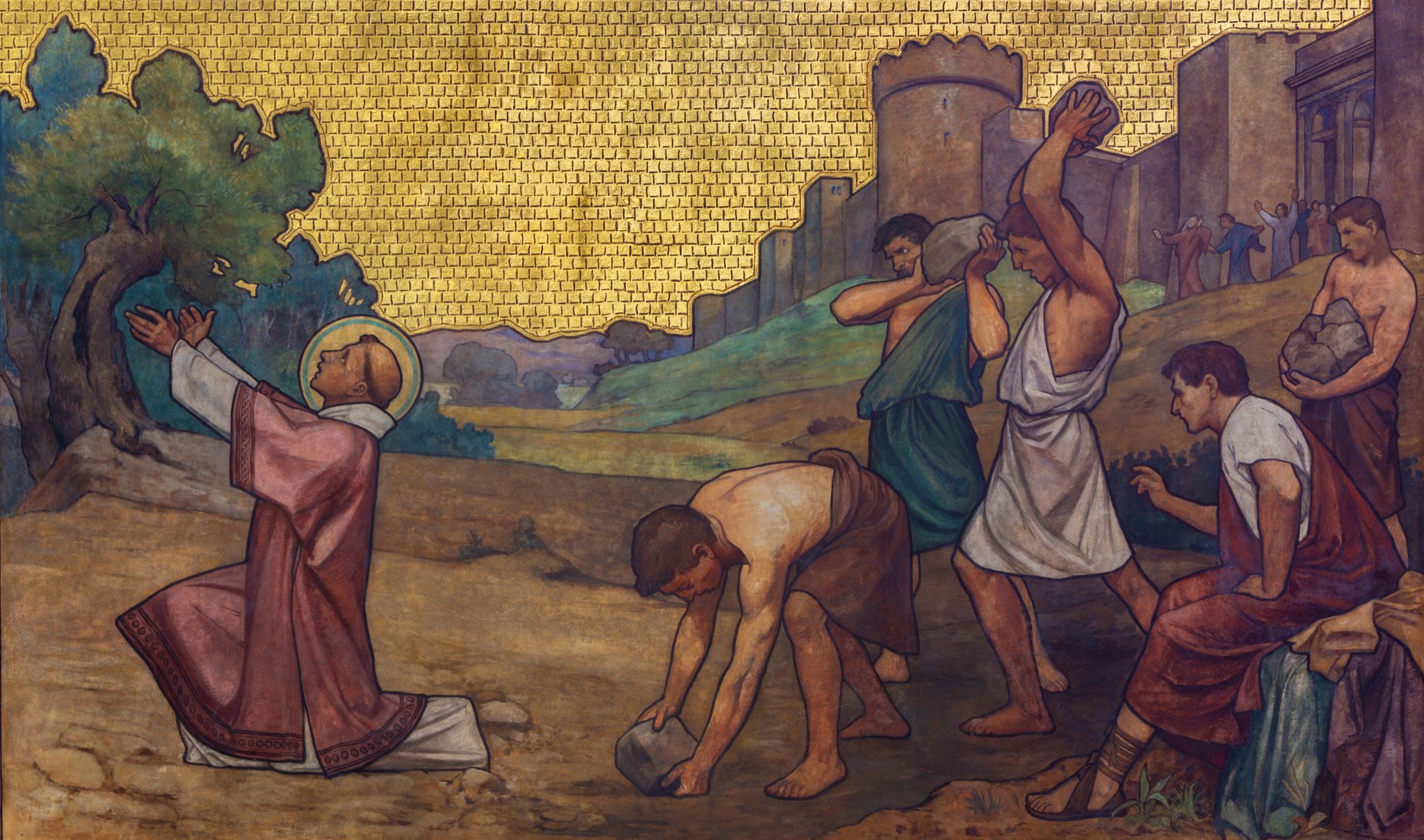 There is no more fundamental liberty than the right to respond to one’s creator. Belief in the transcendent obviously varies, which is good reason for the state to stand clear as people respond to something infinitely mysterious and powerful. When government seeks to impose someone else’s understanding of the world beyond, it is interfering with the essence of the human person. Attempting to suppress people’s deepest spiritual beliefs also guarantees social conflict, since no serious believer in God can obey self-serving politicians instead.

Alas, the Pew Research Center finds a significant increase in infringements of religious liberty over the decade from 2007 to 2017:

Government restrictions on religion — laws, policies and actions by state officials that restrict religious beliefs and practices — increased markedly around the world. And social hostilities involving religion — including violence and harassment by private individuals, organization or groups — also have risen since 2007.

Pew’s work is notable since it addresses two aspects of the ongoing attack on religious faith. One is legal restriction, from modest civil limits to brutal criminal penalties, including death. The other is social hostility, ranging from religious discrimination to mob violence. The two phenomena sometimes merge, especially in Islamic nations. In other cases, governments act despite general social indifference, like in China. In contrast, state repression trailed social antagonism in the Central African Republic.

Unfortunately, both threats contribute to persecution and are on the rise. Put the two together, and religious liberty is likely to suffer greatly. Pew reported that over the decade covered, “52 governments — including some in very populous countries like China, Indonesia and Russia — impose either ‘high’ or ‘very high’ levels of restrictions on religions, up from 40 in 2007.” The comparable increase for states exhibiting significant degrees of social hostility was 39 to 56.

The news was not entirely bad. Both religious restrictions and hostility actually peaked in 2012. But they have since rebounded after dropping. While the future is unpredictable, there is no reason to expect attacks on religious faith to fall measurably in the future.

Countries with the highest restrictions are predictable, mostly Muslim or communist/authoritarian. In 2017, 27 of 198 countries studied (isolated North Korea is not on the list but is known to be one of the worst) had “very high” levels of official repression: Algeria, Azerbaijan, Brunei, Burma/Myanmar, China, Comoros, Egypt, Eritrea, Indonesia, Iran, Kazakhstan, Laos, Malaysia, Maldives, Mauritania, Morocco, Pakistan, Russia, Saudi Arabia, Singapore, Sudan, Syria, Tajikistan, Turkey, Turkmenistan, Uzbekistan, and Vietnam. The only Christian majority state that made the list was Russia — authoritarian and formerly communist.

Those countries that have the highest degree of social hostility are fewer in number. Muslim majority states also dominate the list, though other ethno-nationalist regimes make an appearance: Bangladesh, Central African Republic, Egypt, India, Iraq, Israel, Nigeria, Pakistan, Syria, and Yemen. On this list, only Central African Republic is majority Christian. Nigeria is divided, but the violent conflict is driven by Muslim extremists.

There is continual churning on both lists, with both Iraq and Western Sahara dropping a notch in 2017 in terms of government restrictions, while Comoros, Pakistan, Sudan, and Vietnam rose into the “very high” category. In terms of social hostility, the Palestinian territories and Russia fell, while Central African Republic, Pakistan, and Yemen increased. Overall, in 2017 two-thirds of countries had measurable changes, up or down, in the degree of restrictions. Nearly three-quarters saw shifts in levels of social hostility.

Pew looked at four different forms of government provisions: restriction on religious liberty, state favoritism toward religious groups, limits on religious activities, and official harassment of believers. The first two are most common and “have been rising; the global average score in each of these categories increased more than 20% between 2007 and 2017.”

The latter two are less prevalent but also growing, sometimes faster than the other two. “For instance, the average score for government limits on religious activities in Europe (including efforts to restrict proselytizing and male circumcision) has doubled since 2007, and the average score for government harassment in the Middle East-North Africa region (such as criminal prosecution of Ahmadis or other minority sects of Islam) has increased by 72%.”

Social hostility also has four characteristics: responses to religious norms, gang/mob violence, organized attacks, and interreligious tensions among communities. In this area, the news is more mixed. The first has jumped notably. The next two have grown modestly. The last has “declined markedly.” Indeed, the number of nations suffering through communal battles was down 17 percent over the decade.

Countries with the most restrictions on individuals and groups are China, Maldives, Kazakhstan, Saudi Arabia, Singapore, Turkmenistan, Algeria, Azerbaijan, Laos, Sudan, and Uzbekistan. The malign leader of that list is communist. Most of the others are overtly Islamic states. It is much the same story for those notable for harassing religious groups: Iran, Russia, Malaysia, Vietnam, Indonesia, China, Syria, Egypt, Tajikistan, and Uzbekistan.

The worst countries to live in obviously are those in which both government and society are antagonistic to religious minorities. Among the most populous nations, Egypt, India, Indonesia, Pakistan, and Russia are double offenders. Bangladesh, France, India, Nigeria, and Thailand come close. At the other end of the spectrum are Brazil, Japan, the Philippines, South Africa, and South Korea.

Christians face harassment in 143 countries, up from 107 in 2007. Muslims face the same in 140, up from 96; ironically, the worst treatment of Muslims typically occurs in other Muslim nations, given the Shia/Sunni divide. Jews are abused in 87 countries, up from 51. The lower number reflects not greater acceptance but far fewer people to persecute. The mistreatment of members of other faiths trails far behind. Government harassment is the bigger problem for Christians, Muslims, and others, while social harassment is more extensive against Jews.

Finally, not all geographic areas have been affected the same by rising persecution. The worst abuses have been concentrated in particular areas, some surprising. Pew reported, “The level of restrictions started high in the Middle East–North Africa region, and is now highest there in all eight categories measured by the study. But some of the biggest increases over the last decade have been in other regions, including Europe — where growing numbers of governments have been placing limits on Muslim women’s dress — and sub-Saharan Africa, where some groups have tried to impose their religious norms on others through kidnappings and forced conversions.”

In terms of government restrictions, the Mideast/North Africa is by far the worst. Always has been. Probably always will be. The reason is obvious: the concentration of Islamic-majority states. Almost all persecute other faiths. The Asia-Pacific is next. This region includes several Muslim states as well as communist/authoritarian nations, most notably China, Laos, Vietnam, and (unmeasured) North Korea, along with other ethno-religious states, particularly India. Europe almost exactly matches the global average, sub-Saharan Africa falls a bit below, and the Americas are most friendly to religious liberty.

The Mideast/North Africa also is in the lead in terms of social hostility, though the magnitude has fallen over the last few years. Levels in Europe recently passed those in the Asia-Pacific; both are above the global average. Antagonism in sub-Saharan Africa roughly tracks world levels, while the Americas, again, fall well below average.

There is no more fundamental freedom than the right to seek spiritual fulfillment. There was a time when Christian majorities used the state to oppress those who believed differently. Today the oppression mostly comes from those of other faiths, especially Muslims and Hindus, but also atheists, who rely on government to impose their worldviews. The result is massive injustice worldwide.

America cannot remedy the world’s ills, but it should treat religious freedom as an essential human right and stand for freedom of conscience whenever possible. It isn’t enough to press governments to stop targeting religious believers. States also must protect their citizens from private extortion and violence. And defending spiritual liberty should not be viewed as only the government’s domain. People of goodwill of all faiths should act and organize to expose and shame oppressors around the globe. Freedom of conscience benefits all of us.

Doug Bandow is a Senior Fellow at the Cato Institute. He currently is Scholar-in-Residence with Centre for Independent Studies in Sydney, Australia. He is a former Special Assistant to President Ronald Reagan and author of several books, including Beyond Good Intentions: A Biblical View of Politics and Foreign Follies: America’s New Global Empire.