Constitutional Opinions,Top Story administrative state,Alexander Vindman,Donald Trump,Impeachment Redefining ‘The Rule of Law’ - The American Spectator | USA News and Politics
Menu
Constitutional Opinions
Redefining ‘The Rule of Law’
How the administrative state can bind the president is the big issue in Impeachment.
by E. Donald Elliott
“Gulliver bound down by the Democratic Lilliputians,” Judge Magazine, c. 1890–95 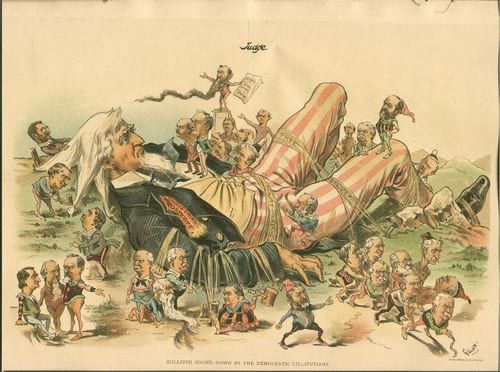 Our country could survive an impeachment trial of Donald Trump. We’d be wounded and I hope that calamity can be avoided, but we’d survive. The more momentous issue in the current impeachment kerfuffle is how and to what extent the administrative state can bind the president. A quiet revolution, so far bloodless, is underway to redefine “the rule of law” to give unelected officials in the administrative state control over the president.

Confucius, the only philosopher I know who was also prime minister of his country, was asked what one thing he would do first to improve the political health of his country. “Get the names of things right,” he responded (his statement is also sometimes translated as “the rectification of terms”). He understood the power of determining what people call things.

We all agree that “no one is above the law” and we all believe in “the rule of law,” but exactly what those terms mean is now up for grabs. Recently some partisans have claimed that the “rule of law” means democratically elected officials, including the president, are bound by more than the written law duly enacted by Congress and signed by the president (or enacted by supermajorities over a veto) and the words of the Constitution. Their new definition of “the rule of law” would include the consensus of subordinate expert officials, the so-called “interagency consensus,” and the rules, policies, and procedures promulgated by the “deep state.” Change what “the rule of law” means, and you change who is running the country.

A good example is the recent firing of Secretary of the Navy Richard Spencer for refusing to abide by a legal presidential order to allow an officer acquitted of murder but convicted of the lesser offense of having his picture taken with an enemy’s dead body to keep one of his medals. This led the former Navy secretary to write a self-indulgent open letter to the press and public claiming that following the president’s order would have violated his oath to defend the Constitution. Exactly where in the Constitution it allegedly says that the commander in chief of the armed forces may not overrule his subordinates on whether or not a particular sailor gets to keep a particular medal is never specified.

Spencer’s open letter praising himself for his martyrdom on the altar of the rule of law, as he sees it, merely makes sanctimonious general noises that

The rule of law is what sets us apart from our adversaries. Good order and discipline is what has enabled our victory against foreign tyranny time and again, from Captain Lawrence’s famous order “Don’t Give up the Ship,” to the discipline and determination that propelled our flag to the highest point of Iwo Jima. The Constitution, and the Uniform Code of Military Justice, are the shields that set us apart, and the beacons that protect us all.

Gimme a break, sir. I agree with all of your flag-waving platitudes, but exactly where does the law say that you, as secretary of the Navy, get to overrule the president rather than the other way around?

The same question applies to the procession of former ambassadors and national security council staffers who traipsed up to Capitol Hill to accuse the president of the allegedly impeachable crime of refusing to follow the “interagency consensus” on how best to negotiate with Ukraine to reduce its endemic corruption. The president thought we should withhold aid until the incoming administration made a public promise to do better, but the bureaucracy thought we should give them the aid unconditionally and ask nicely afterwards. I do not purport to know which was right, but I do know that historically this kind of judgment call has been the president’s. “The buck stops here,” proclaimed the sign on Harry Truman’s desk in the Oval Office.

Today that is no longer clear. A serious movement is trying to redefine “the rule of law” to mean that the president — particularly one whom the career bureaucrats regard as a dangerous ignoramus from Queens — must follow what the “experts” decide, especially if they all agree. Perhaps this was captured most clearly by a self-important lieutenant colonel, Alexander Vindman, in his recent Congressional testimony. Lt. Col. Vindman stated with evident outrage that President Trump had not only refused to follow “the interagency consensus” but also had the temerity to ignore the “talking points” that the experts, presumably including Lt. Col. Vindman himself, had prepared for the president to parrot on his call with the incoming president of Ukraine, instead deciding for himself what to say.

In the words of an editorial in Issues & Insights, “at the heart of the impeachment are the hurt feelings of career bureaucrats.… Removing a president from office for not sticking to a set of bureaucratic talking points would set an interesting precedent.”

This is not as petty as it sounds, however. In his classic Constitutionalism: Ancient and Modern, Charles Howard McIlwain, the late Eaton Professor of Government at Harvard, argues that the rule of law begins when the king feels compelled to follow the “advice” of his barons, even though he disagrees with them. Thus absolute monarchies become constitutional monarchies in which the king becomes a ceremonial figurehead. What can happen to kings can also happen to presidents. The president of Germany, once powerful, today is a ceremonial figurehead with very limited powers.

The inventors of the modern administrative state, Woodrow Wilson and James Landis, believed that democratic politics needed to be tempered by administrative expertise. Their intellectual successor, Margaret O’Mara, a professor of history at the University of Washington, now argues in the New York Times that “The deep state exists to battle people like Trump.”

Until now, however, the philosophy of the U.S. Constitution has been that the executive branch is headed by a single elected official who may overrule and replace any subsidiary official unless constrained by a statute duly passed into law by the Congress and either signed by the president or passed by supermajorities over his veto (and even then, there are additional constitutional limits on how much Congress may limit presidential power).

This “unitary executive” was controversial among the Framers at first. Next to slavery and a few other issues, it was one of the most debated topics at the constitutional convention. For a while, the leading solution was to vest the executive power in a triumvirate, a solution the Romans had tried to ameliorate the power of their emperors. In the final analysis, the Framers came down in favor of vesting the executive power in a single person, the president.

While the legislative and judicial powers are vested in multi-person institutions — the Congress in one case and the Supreme Court and such other inferior courts as Congress may establish in the other — by contrast the entire executive power is given to a single person by the Constitution, not to “the interagency consensus.”

If there was any doubt as to what that meant, it was resolved by the “Decision of 1789.” The first Congress, which included many of the Founders, passed several laws specifying what would happen if the president fired certain officials, including the secretary of state, but these did not explicitly grant any new power to fire them. This omission has conventionally been interpreted as showing that the Founders believed the president already had the power to fire subsidiary officials under the Constitution itself.

Apparently the Ukrainian-born former ambassador to Ukraine, Marie Yovanovitch, knew her Ukrainian history better than her American history, as she testified with evident outrage that the president had led a “concerted campaign” to reassign her. That’s his constitutional prerogative, Madam Ambassador. You don’t own the office; you serve at the pleasure of the president. I don’t suppose Lt. Col. Vindman, also Ukrainian-born, learned any U.S. constitutional law in his ROTC course at SUNY Binghamton either. At least James Comey, a graduate of the University of Chicago Law School, knew enough constitutional law to concede that “technically” the president could fire him, although he tried to get him impeached for doing so.

If the insurgents succeed, it would be the single most significant change in the structure of American government in our history. I am not one who believes that we are forever bound by the dead hand of the past. But I do want my fellow Americans to realize what a fundamental constitutional change hangs in the balance if the current attempt to redefine the “rule of law” to mean that the president is bound to follow the interagency consensus were to succeed. The Lilliputians would have bound Gulliver.