A pro-LGBT and feminist Muslim organization says it was expelled from tabling at the annual Islamic Society of North America convention earlier this month where self-proclaimed LGBT ally Linda Sarsour headlined as a keynote speaker.

“We’re really sick and tired of the hypocrisy of them (ISNA) claiming to be LGBT allies,” said Ani Zonneveld, founder and president of Muslims for Progressive Values, a faith-based human rights organization founded in 2007. “They’re only an ally when the camera is on.”

ISNA is the largest Muslim organization in North America and acts as an umbrella organization for numerous other Islamic groups and affiliated mosques. The organization was established in 1981 by the Muslim Student Association, and its founding members had connections with Islamist groups such as the Muslim Brotherhood and the Jamaat-i Islami, according to academic scholars on Islamism in America.

In 2015, President Barack Obama recorded a video message for the group’s convention, which annually draws tens of thousands of attendees. Women’s March board member Linda Sarsour spoke at the 54th ISNA convention held on June 30–July 3 in Chicago this year.

MPV partnered with the Human Rights Campaign to operate a tabling booth. There, MPV says their pamphlets advocating LGBT and women’s equality within Islam first drew the ire of an ultra-orthodox attendee. Soon after, they were asked to close shop and leave the venue by ISNA staff.

According to Frank Parmir, a convert to Islam and organizer with MPV-Columbus who staffed the booth with Michael Toumayan, HRC’s religion and faith program manager, a man in “Salafi garb” lectured them on homosexuality and sin. “To be a ‘real Muslim,’ one must assert that homosexuality is a sin,” Parmir recalled the man saying.

Parmir said within an hour after that encounter, a group of men in suits accosted them at the booth. Parmir identified one of the suited men as ISNA Conventions, Conferences, and Special Projects Director, Basharat Saleem. “He wasn’t sure that they could allow us to stay because of some of the literature and some of the positions we were advocating,” Parmir said. “They would have to think about it and get back to us.”

Saleem and ISNA did not respond to a request for comment.

Soon after, Parmir said another man “asked” MPV and HRC to vacate the premises. Parmir described the request as a veiled demand. Before leaving, Parmir and Toumayan met with Saleem and ISNA board director Farhan Syed to negotiate. Other men, including security, were also present, according to Parmir. “It finally became clear that HRC was not the problem,” Parmir said. “They were okay with HRC’s advocacy for gay rights. They were not okay with MPV’s advocacy that gays should find unrepentant inclusion with the Muslim community and that women should be given equality.”

Parmir said the men found MPV’s literature “stressful” and “upsetting” for convention attendees. According to Parmir, Syed attempted to be sensitive, citing his homosexual friends who “come to dinner,” but added the caveat that “they’re not Muslim.” 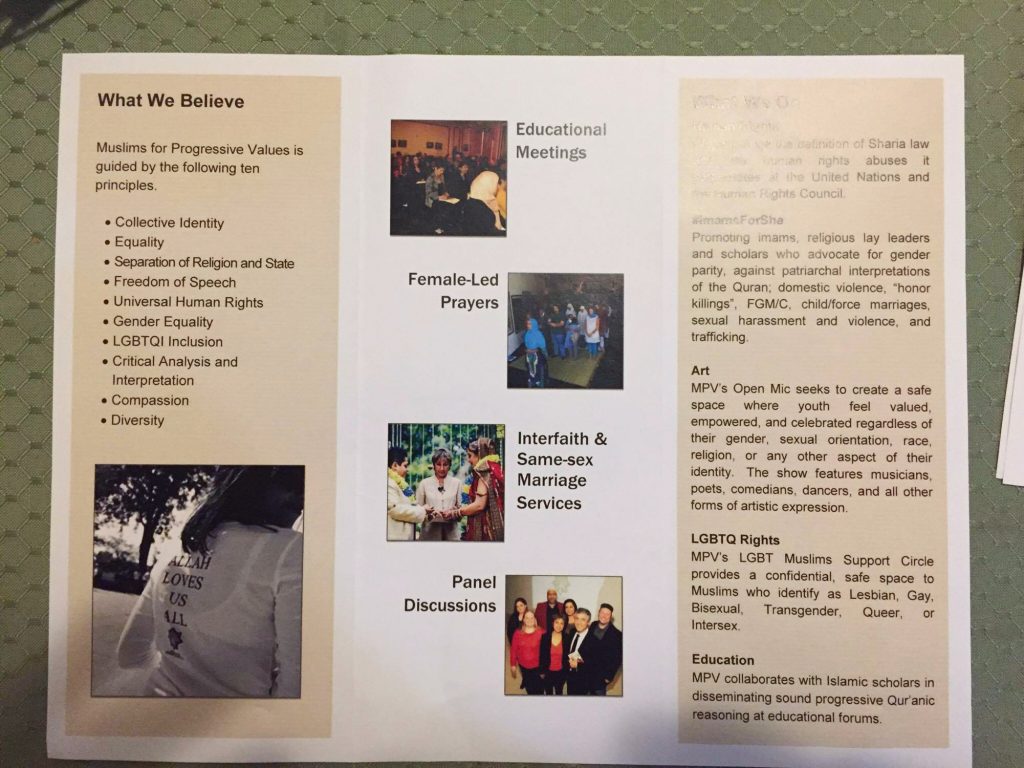 MPV says this was one of the brochures that ISNA staff objected to. Frank Parmir

After the brief meeting, Parmir and Toumayan left the convention with their tabling materials. Toumayan declined to comment, stating that HRC’s communications department was aware of the incident and was “strategizing” a response.

Zonneveld and Parmir said they have not heard from ISNA.

In a strongly worded statement, MPV accuses ISNA of “hypocrisy.”

“In the past, ISNA has declared itself to be a proponent of women’s and LGBTQ rights, and in the aftermath of the Pulse nightclub shooting in Orlando by a self-hating gay Muslim man indoctrinated with homophobic teachings, many ISNA member mosques claimed to be ‘supportive of LGBTQ rights,’” the statement read. “This incident not only puts the spotlight on ISNA and its member mosques’ true policy toward LGBTQ Muslims but also their discriminatory and intolerant version of Islam as a whole.”

The statement proceeds to call on ISNA to adopt MPV’s position against homophobia and misogyny.

Sarsour, who has spoken previously about her support for LGBT causes, did not respond to a request for comment about the alleged incident. Separately, Sarsour has courted controversy for calling for jihad against the “fascists and white supremacists and Islamophobes reigning in the White House” during her keynote ISNA speech.

Andy Ngo is a graduate student in political science at Portland State University, studying Islamism and its intersection with women’s issues. Follow him on Twitter here.