On an episode of The Mary Tyler Moore Show, the best sitcom of the 1970s, Ted Baxter (Ted Knight), the dumb-as-a-box-of-rocks Minneapolis news anchorman on whom Will Ferrell’s Anchorman character was obviously based, refuses to believe that overpopulation is a serious problem: “I went to the movies the other night to see The Great Gatsby,” he says, referencing the big Robert Redford flop of 1974. “There couldn’t have been more than six people in the whole theater!”

Well, I can beat that. This weekend I went to see the critically acclaimed Call Jane and I was the only person there. It was luxurious — like having one’s own personal home cinema. The only problem was that the film stunk to high heaven. 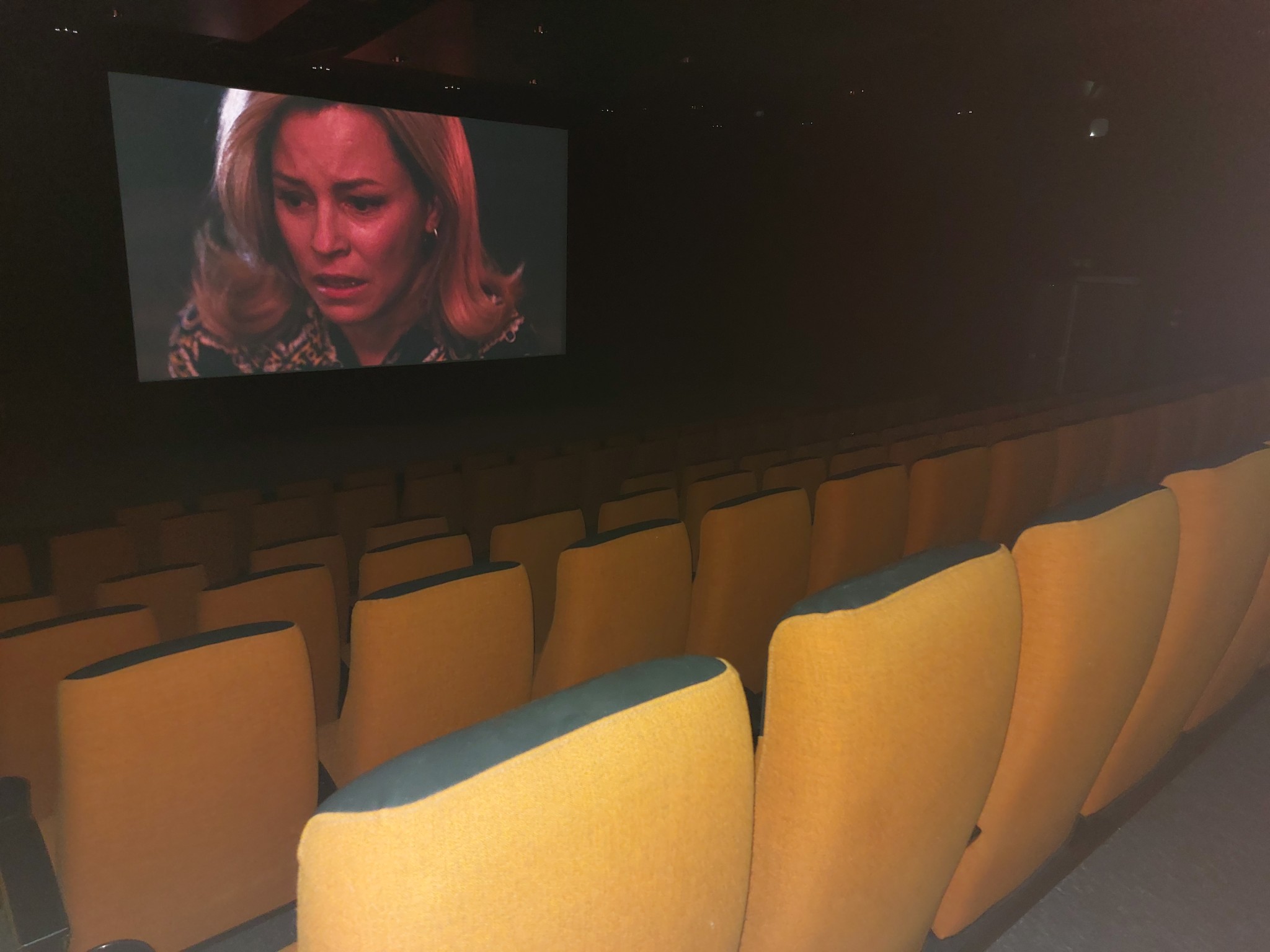 Elizabeth Banks gazes with horror at the totally empty theater where Call Jane is being screened.

Written by Hayley Schore (The Resident) and Roshan Sethi (7 Days), Call Jane was directed by Phyllis Nagy, who wrote Carol (2015), a lesbian romance starring Cate Blanchett and Rooney Mara. That picture was critically acclaimed, too. Nagy specializes in the kind of product that reviewers feel obliged to celebrate — not because of their aesthetic merits, but because their political-correctness quotients are through the roof.

But at least Carol — a modestly engaging period tale — was watchable. Call Jane — a celebration of abortion — is torture.

Our heroine is Joy Griffin (Elizabeth Banks), a pregnant housewife in the Chicago suburbs whose husband, Will (Chris Messina), a successful lawyer, has just been made partner at his firm and whose daughter has just gotten her first period. She lives an ordinary middle-class life, but it’s 1968 and the world is undergoing a dramatic political transformation — and so, in short order, will Joy.

As the story begins, Joy and Will are attending a fancy do at a big downtown hotel. Informed of a Yippie demonstration nearby, Joy seems unusually drawn to the idea of it. Bored with her humdrum life? Primed for what they used to call a consciousness raising?

Next thing you know, she’s collapsed on her kitchen floor and been diagnosed with cardiomyopathy. To ensure she doesn’t die, she needs an abortion, pronto. But at a meeting with the dozen-odd white men who run the hospital where she was planning to give birth, she’s turned down because her condition isn’t definitely fatal.

What to do? In a shabby part of town she sees a flyer taped to a light pole: Pregnant? Anxious? Call Jane. There’s a phone number. She calls it and ends up getting an illegal abortion in a ramshackle apartment from a young doctor named Dean (Cory Michael Smith). Afterwards, over spaghetti in a modest but cozy house plastered with left-wing posters, several of them reading Women of the World Unite, she meets Virginia (Sigourney Weaver), who runs this secret abortion service (based on the real-life Jane Collective), and the cross-section of women — white, black, old, young, a nun — who work with her.

Instead of returning to her life, Joy is drawn into this coven — I mean sisterhood. Telling her husband and daughter that she’s taking art classes, she spends hours every day chauffeuring pregnant girls to and from their appointments with Dean, and even holding their hands while their abortions are performed.

When she’s not doing this, she hangs out with Virginia and the other women and discovers that while they’re all radicals, some are more radical than others. Virginia, a veteran of Marxist activism, tells Joy that the Marxist men “were bigger pigs than the pigs” (i.e. the cops). One of the women, Gwen (Wunmi Mosaku), wants to collaborate with the Black Panthers, a proposal that Virginia nixes. (Gwen rants about “black genocide,” apparently a reference to police abuse of blacks — but there’s no indication that the filmmakers are making an ironic statement about the fact that abortion in America has been described by many observers as an engine of black genocide.)

Virginia’s constant gripe is that Dean is performing too few abortions and charging too much, which limits the number of women they can serve. So when Joy finds out that Dean isn’t really a doctor at all but has taught himself how to perform abortions, she gets him to teach her — and she becomes the abortionist.

At about this point in the story, I reflected that its producers could’ve chosen to green-light a script about, say, a group of women who help expectant mothers bring their pregnancies to term and who then arrange adoptions. In fact, Hollywood actually used to make movies like that. If you’ve never seen it, check out Blossoms in the Dust (1941), the deeply moving true-life account of Edna Gladney (Greer Garson), a Texas woman who took in unwanted children and found them homes. It was a big hit: I suspect nobody ever saw Blossoms in the Dust in an empty theater.

Or perhaps the producers of Call Jane could’ve made a movie about how abortion, in the years since Roe v. Wade, has become tragically routine — a far cry from the “safe, legal, and rare” phenomenon touted by Bill Clinton in 1992. The result has been a widespread devaluation of life itself. But of course in 2022 no self-respecting left-wing cineaste is going to make a film about how progressivism has damaged and coarsened American life. No, the standard move in Tinseldown during the past few decades has been to tell stories from the 1950s or ’60s in which radicals can be sold to low-information viewers as liberal heroes (The Trial of the Chicago 7) or in which real liberal heroes (Selma) can be sold as the ideological precursors of today’s wokesters. Hence this piece of garbage.

Promoting abortion, needless to say, has always involved highly euphemistic language (“pro-choice”) and an exceedingly delicate refusal to depict it realistically. So it is in Call Jane. Several scenes are set in the makeshift operating room — but there’s never a sign of blood. Nor are we given so much as a glimpse of what’s being removed from the patient’s uterus — or of what happens to it afterwards. At a recently Motion Picture Academy–sponsored event at which several of the women involved in making Call Jane were interviewed, Banks actually described abortion as “a life-affirming choice.” Even George Orwell couldn’t have come up with that one.

Call Jane doesn’t just present abortion as a remarkably sanitary affair; it makes light of it. After Dean explains to Joy that removing fetuses from wombs is a lot like scraping out the inside of a pumpkin, we cut to Joy’s kitchen, where she practices on a series of pumpkins and bakes a kitchenful of pumpkin pies — “for a bake sale,” she tells Will. This is meant to be amusing. As Nagy said at that Academy-sponsored event (where, by the way, the Supreme Court’s Dobbs decision was consistently misrepresented), she loved the Call Jane script because she saw it as an opportunity to address “abortion, women’s rights, collectivism … with a lightness of touch that would hopefully speak to the widest possible range of audience members.” This was also Sigourney Weaver’s pitch on The Tonight Show: Call Jane, she promised, is “not like taking a bottle of medicine or anything. It’s got jokes.”

Well, no sale. It turns out that most Americans don’t think abortion is an appropriate topic for light entertainment. Call Jane bombed not just in my neck of the woods, but everywhere. In fact it bombed spectacularly: on its opening weekend in the U.S. (Oct. 28–30), its per-screen take was half that of the gay rom-com Bros, whose terrible grosses after its release on Sept. 30 made it an instant legend in the annals of celluloid fiascos. It should be noted, however, that free screenings of Call Jane were arranged around the country by (who else?) Planned Parenthood — making it possible to get an abortion and watch an abortion in a single outing.