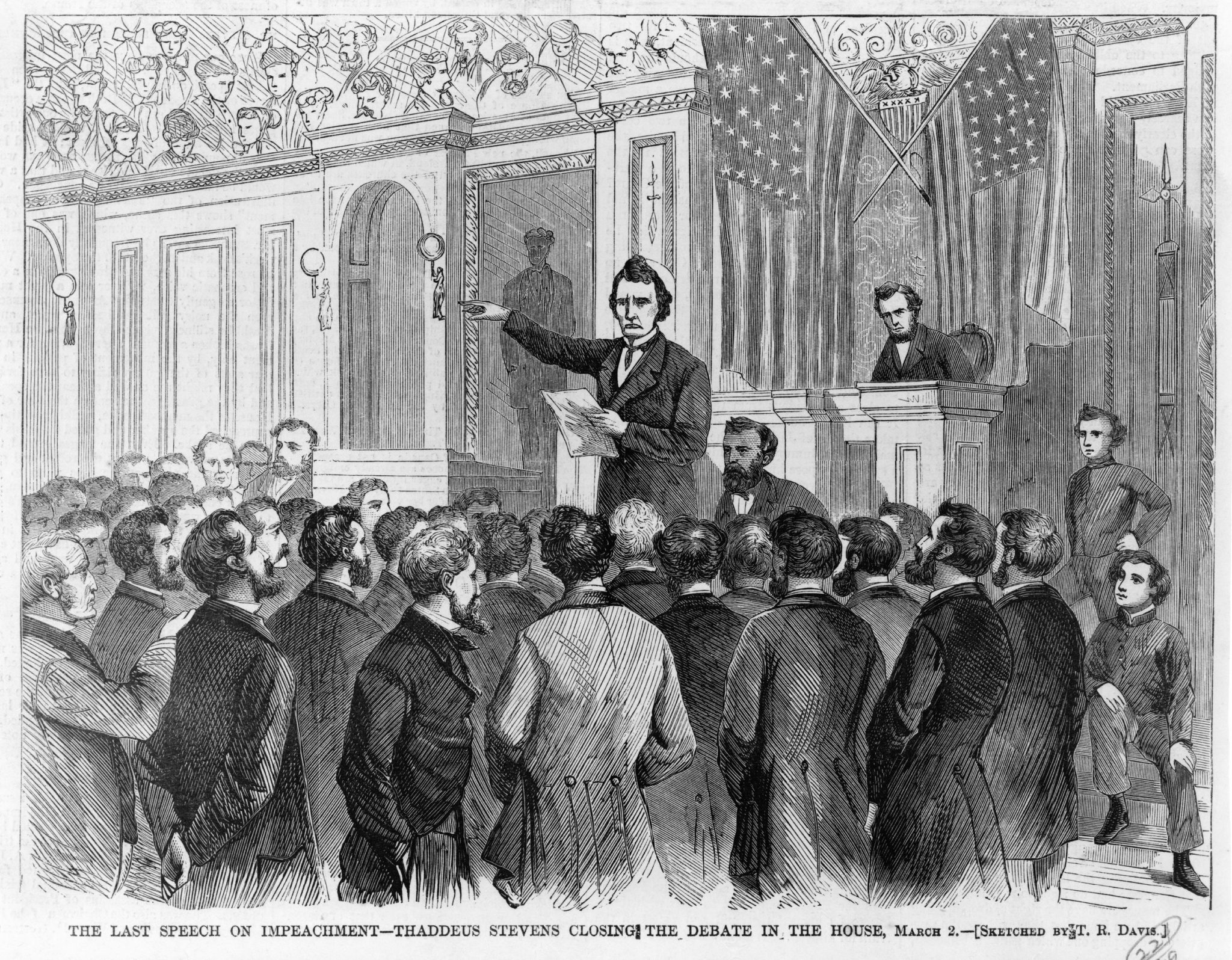 Donald Trump is not the first president whom opponents tried to drive from office almost from the start of his term. Radical Republicans targeted Andrew Johnson only a few months after he assumed the presidency following Abraham Lincoln’s assassination in April 1865. Johnson committed no legal lapses and left the office poorer than when he entered it. His metaphorical “crime” was adopting a post–Civil War Reconstruction plan modeled after Lincoln’s that was anathema to the Republicans who controlled Congress. Instead, they wanted their own plan, one designed to ensure that the infant GOP stayed in power for years thereafter.

When the Civil War ended, the Republican Party was barely 10 years old. Its leaders worried that it might be strangled in its cradle if the readmittance of Southern states into the Union was not managed in a way that would prevent Southerners from allying with Northern Democrats to regain control of the federal government. Before the war the secession states cast 900,000 white votes. But if Congress could mandate black suffrage in the South, Republicans could gain 700,000 black votes. Additionally, if they could also disfranchise former Confederates, the ex-slave vote could become the region’s majority.

Johnson announced his plan in May 1865 with unanimous agreement from his Lincoln-inherited cabinet. Before the year ended, however, Massachusetts Sen. Charles Sumner secretly helped write a newspaper article calling for Johnson’s impeachment. It was a drastic suggestion because no president had ever before been impeached. From that moment — with more than three years remaining in his presidency — radical Republicans sought any excuse to remove Johnson from office. For decades, men like Sumner and his ally in the House, Pennsylvania’s Thaddeus Stevens, had insulated themselves from the South. They knew nothing of its culture and cared less, whereas Tennessee’s Andrew Johnson was the only Southern senator to remain Union-loyal after Confederate secession. Nonetheless, Sumner claimed, “Massachusetts could govern Georgia better than Georgia could govern herself.”

Congressional Republicans tried in many ways to nullify Johnson’s claim to office, or failing in that, to nullify his authority. In February 1866, Stevens tried unsuccessfully to kick Tennessee out of the Union in order to invalidate Johnson’s presidency. In December 1866, the House Judiciary Committee (HJC) investigated alleged impeachment charges involving election interferences and “corrupt” use of veto and pardon powers. A month later, a Missouri congressman accused Johnson of conspiring, when he was vice president, to assassinate Abraham Lincoln. When the HJC declined to recommend impeachment, Massachusetts Rep. Benjamin Butler fruitlessly continued the investigation as chair of the new Assassination Committee. After Supreme Court rulings that restricted military tribunals threatened to derail congressional Reconstruction plans, some Republicans urged that certain justices be impeached.

In order to gain veto-proof control of Congress, Republicans sought to stack it with representatives from new GOP-loyal frontier states. They got Nebraska in, but failed to achieve admittance for Colorado. Johnson’s veto message for the Colorado bill explained that the territory did not ask for admission and had only 30,000 residents. In March 1867, Congress overrode Johnson’s veto to pass the Tenure of Office Act, a law later ruled unconstitutional, which denied any president the authority to dismiss Cabinet members without Senate approval. Congress passed another law over his veto that undermined a president’s authority as commander in chief. The Command of the Army Act required that all presidential military orders be passed through the general of the Army (then Ulysses S. Grant) who may or may not send them along to his subordinates. The act was designed to give Congress indirect control in the military districts that then ruled the South until each state could be readmitted to the Union under Republican-controlled vassal regimes.

The press lied about and hounded Johnson almost from the start. Lafayette Baker, who headed an informal secret police unit during Lincoln’s administration, published a book in 1867 that stigmatized Johnson by innuendo as entertaining prostitutes in the White House. When the president took a railroad campaign through New York and the Midwest to promote his Reconstruction plan, Republicans paid hecklers to disrupt his speeches. Agitators shouted him down in city after city. The press portrayed his debates with hecklers as undignified, and cartoonists drew insulting caricatures. Some reporters falsely accused him of drunkenness. When the train pulled into Chicago, the opposition staged a funeral march. When it arrived in Indianapolis, agitators started a riot. A mendacious press ridiculed him at every turn.

When the House of Representatives finally impeached him in 1868, they found no legal offenses despite having scrutinized his background and conduct for three years. As a result, they drew up 11 articles, eight of which were connected to the unconstitutional Tenure Act, while the others were equally without merit, including one that condemned him for intemperately criticizing Congress. Only because seven Republican senators defied party disciplinarians and the media by voting against conviction did Johnson win acquittal by a single vote.

Similarly, at the bar of modern historians Johnson’s chief “crime” is the cultural one of sharing racist attitudes that were common in America during his time. Although considered an unforgivable flaw by a consensus of today’s historians, Johnson biographer Albert Castel argues,

Johnson’s anti-black prejudice, which so many modern historians deplore, was indeed deplorable. It rarely — if ever — was decisive, however, in determining his policies and conduct. Furthermore, his attitudes on race did not differ substantially from that of Jefferson, Jackson or Lincoln…. The [modern consensus] that Johnson by his … bull-headed resistance to Congress frustrated the achievement of “democracy” in the South … is, to put it bluntly, nonsense. By establishing “democracy” these neo-Radicals mean specifically the confiscation of land from Southern whites and its distribution among blacks…. There was never, however, the slightest chance of this taking place, Johnson or no Johnson.

In truth, today’s historians who condemn Johnson warrant criticism themselves. They ignore his good qualities, such as standing fast in the Senate after his home state seceded and then becoming Tennessee’s military governor, prompting the Confederacy to classify him as an enemy alien. He was a pioneering supporter of the Homestead Act and a persistent opponent of monopolies. As president he told a reporter that he would have worked for limited black suffrage had he remained Tennessee’s governor. His Reconstruction plan adhered closely to Lincoln’s and was even more strict on the planter class. As president he also urged the popular election of senators and the abolishment of the Electoral College. He had always been a champion of limited government and correctly predicted that the growth of federal agencies would lead to a Deep State, irresponsible to the people. Finally, he was a devout opponent of crony capitalism.