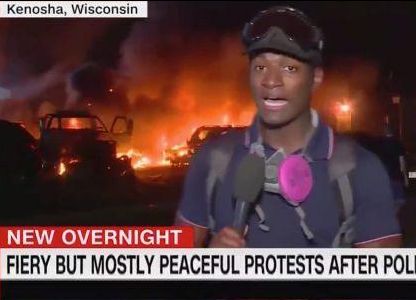 CNN finally got around to condemning the fiery but mostly peaceful riots earlier this week. The arson and looting and murders in the streets were all fun and games, but now Don Lemon is worried that the violence is “showing up in the polling. It’s showing up in the focus groups. It is the only thing right now that is sticking.”

There’s a lot to be said about what CNN, including Don Lemon himself, has done to legitimize this social unrest. It’s also worth pointing out how rioting only became objectionable once it threatened to hurt Democrats and not, say, small business owners or anyone living in the affected cities. But let’s indulge Don Lemon for a second, because he’s absolutely correct. Black Lives Matter has mutated into an electoral liability for the Democratic brand.

A new Hill-HarrisX poll conducted August 22-25 (during the most intense part of the rioting in Kenosha) finds that approval of President Trump among black voters is now at 24 percent. That’s an astonishing 9 point jump since the same poll was conducted a mere two weeks before. Support among Hispanics has also grown from 30 to 32 percent. In the absence of better explanations (maybe black voters are just really loving the convention?) it seems plausible that the rioting is driving voters, particularly those in the most affected urban communities, rightward.

This assumption is substantiated by separate polling. Marquette Law School published a survey on Wednesday that asked residents of Wisconsin a battery of questions about BLM and the protests. The results ought to be enough to send chills down the spine of any Democratic strategist. Respondents had approved of the protests by a margin of 25 points in June; in August, that’s dropped to a margin of 0, with 48 percent approving and 48 percent disapproving. The idea of defunding the police, already deeply unpopular in June with a -47 margin, has sunk further in August to a -61 margin — 78 percent of voters are against it.

Police have become more popular, rising from 54 net approval to 63. Notably, the largest increase in approval has been among black and Hispanic respondents, who now have a positive opinion of the police overall. BLM’s impressive 32 percent net approval rating in June has eroded to merely 12 points. If that sinks any further, Democrats may soon regret their choice of election messaging.

You may recall that Democratic pollster David Shor had predicted that this would happen back in late May, and was promptly fired from his job for the trouble. He had tweeted research by a black academic that showed that race riots had likely tipped the 1968 general election in Nixon’s favor, with the obvious implication that the same thing could happen in 2020. We can be sure now that it is indeed happening, and not a moment too soon.