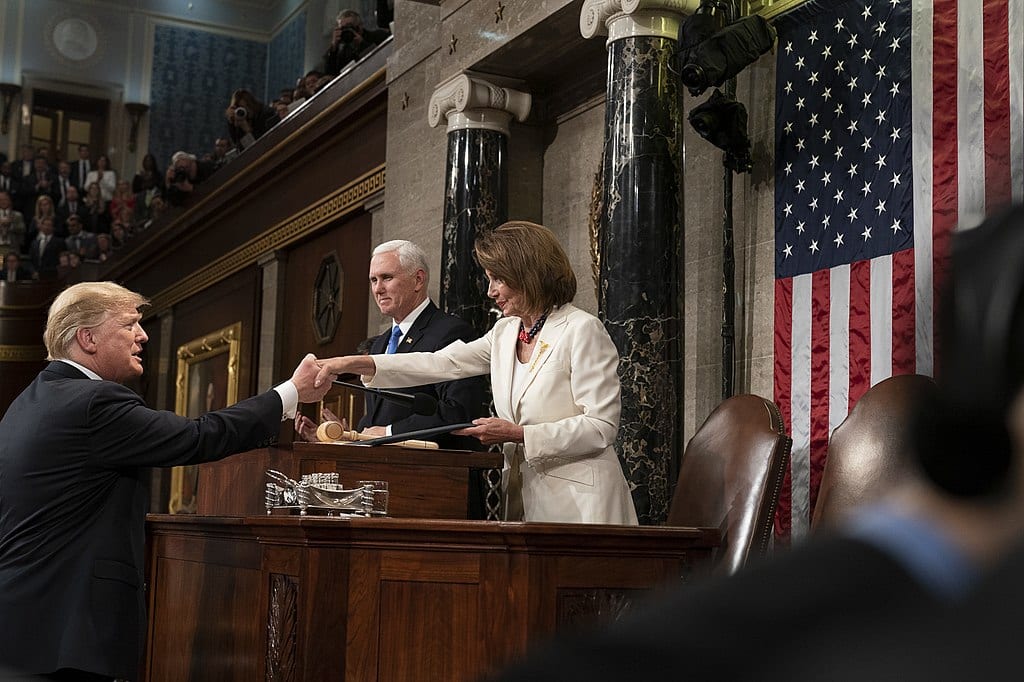 When House Speaker Nancy Pelosi withdrew her original State of the Union invitation, preventing President Trump from delivering the address as scheduled on January 29, she was probably surprised when he responded with such calm forbearance: “This is her prerogative. I will do the address when the shutdown is over.” By the time Trump finished the rescheduled speech Tuesday evening, she no doubt understood that her petty political ploy had been a blunder. Trump, being no mean showman, had long since realized that the highly publicized delay would increase public interest in the speech — and that is precisely what happened.

By the time he entered the House chamber, it was already obvious that the national audience would very likely exceed last year’s larger-than-usual viewership for such speeches. This is not typical for the SOTU address. The normal pattern is a reasonably large audience for a president’s first address, followed by a gradual decline in public interest each year thereafter. This was certainly true for Trump’s predecessor. Tuesday evening’s speech, however, drew a larger audience than did the President’s 2018 address. According to a report in the Hill, broadcast TV numbers from Nielsen show the audience share was 10 percent over last year’s speech:

The four major broadcast outlets — CBS, NBC, ABC and Fox — combined for a 16.3 overnight rating during the address Tuesday night, which could result in total viewership of approximately 49 million when final numbers, to include the cable news networks and other outlets, are in later Wednesday.

And, in more than one case, their answers debunked Democrat talking points. A particularly glaring example of this was the public’s response to his points on illegal immigration. The Democrats have consistently attempted to convince the public that President Trump and his administration is exaggerating the seriousness of the problem. They have frequently accused him of unnecessarily stoking racism and xenophobia in order to “manufacture a crisis.” Indeed, this is the primary basis for their consistent yet evidence-free claims that he himself is a racist. That is not, however, how the Americans who watched last night’s SOTU address view the issue:

Most viewers had a favorable opinion of what Mr. Trump had to say about immigration.… From what they heard tonight, 71 percent of speech-watchers think there is a crisis at the southern border.

It goes without saying, of course, that such unexpected and unwelcome findings forced the people at CBS to downplay the significance of their own poll. To that end, they devoted a lot of irrelevant verbiage to the number of Republicans who watched President Trump’s speech:

In the latest CBS national poll released last month, 25 percent of Americans identified themselves as Republicans. Among those who watched Tuesday night’s address, that figure was 43 percent.

Oddly, the folks at CBS neglect to explain how that datum applies to the extraordinarily high approval figures among the Independents who watched the President’s speech. Moreover, on other issues, the approval ratings on Trump’s speech are also too high to explain away:

On North Korea, 78 percent of speech-watchers think a second meeting between Mr. Trump and North Korean leader Kim Jong Un is a good idea.… Most viewers [74 percent] approved of Mr. Trump’s comments on the Middle East.

The analysts at CNN also conducted a survey of the people who watched the State of the Union address, and found higher rates of approval than they evidently expected. It’s unlikely that these number crunchers were pleased to find that the percentage of viewers who rated the speech as “very positive” or “somewhat positive” was identical to the CBS result — 76 percent. Not coincidentally, CNN also tried to explain that away with the “more Republicans watched” argument. But the positive effect of Trump’s performance was very real and clearly taking its toll on Speaker Pelosi as the speech went on. Former Speaker Newt Gingrich felt her pain:

She had to listen politely.… and pretend to be a good hostess (the President is the guest of the House). When even her most radical new members began standing and applauding, she must have experienced a bit of despair.

This was obvious to anyone watching Madam Speaker gnaw her lip and writhe for the 82 minutes Trump spoke. To paraphrase the immortal P.G. Wodehouse, it was clear that, if not actually disgruntled, she was far from being gruntled. But she could have compromised with Trump on the wall and prevented an unnecessary fight. And she certainly didn’t need to postpone the SOTU. But she refused to do the former and insisted upon the latter — setting Trump up for Tuesday night’s triumph. A classic example of poetic justice. Now the country sees him as more presidential and her as less reasonable. On the shutdown fight, she was too clever by half.