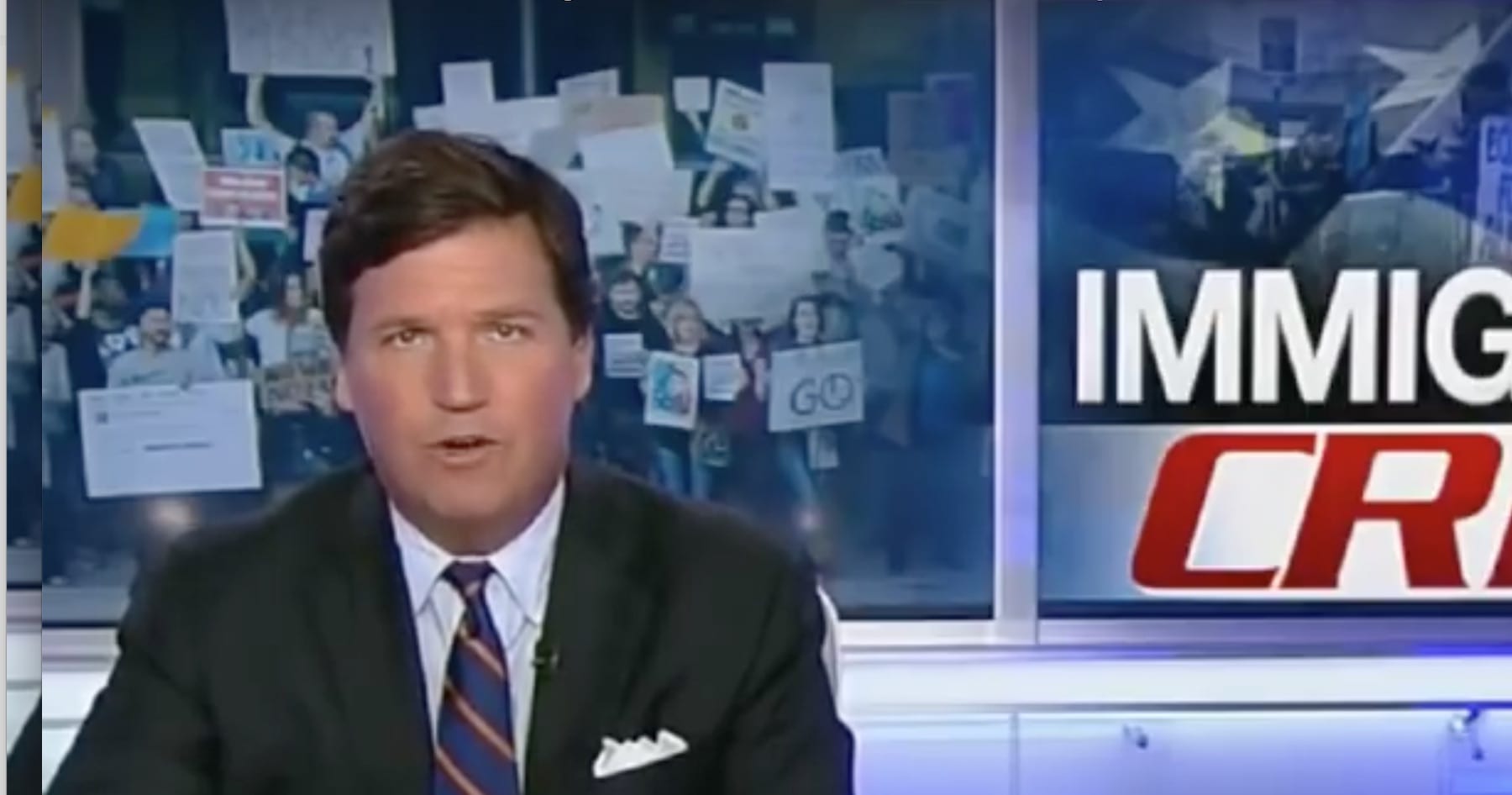 Pacific Life pretends to be in the insurance business.

They are not. Pacific Life is in the decidedly political business of supporting the American Left-Open Borders specifically — which is exactly why they have announced that they are pulling their ads from Tucker Carlson’s eponymous Fox News show. The 150-year-old company that celebrated its 100th birthday in 1968 with Ronald Reagan as their speaker has now joined forces with those on the extreme Left who have made it their decidedly un-American political business to threaten, intimidate, and bully advertisers with the goal of silencing television and radio hosts in the conservative media.

The immediate “cause” of the assault on the Tucker Carlson Tonight show was this typically forthright statement on illegal immigration. Said Tucker, focusing on the caravan that has made its way to the U.S. southern border, literally trying to scale the border security walls and fences (such as they are) that are markers of the U.S.-Mexican border:

Our leaders demand that you shut up and accept this. We have a moral obligation to admit the world’s poor, they tell us, even if it makes our own country poorer, and dirtier, and more divided. Immigration is a form of atonement.

Previous leaders of our country committed sins — we must pay for those sins by welcoming an endless chain of migrant caravans. That’s the argument they make.…

What is more predictable is how leaders of the caravan are starting to talk. Suddenly, they sound like community college professors from Long Beach. Entitled, cut off from reality, and highly aggressive.

Yesterday a group of leaders of the caravan marched into the U.S. consulate in Mexico, and demanded $50,000 to return to their own countries.

Huddled masses yearning to breathe free? Nope, cynical shakedown artists who have been watching too much CNN.

No surprise there. When rich liberals tell you that America owes you a comfortable life, nobody should be shocked when you believe them.

Of course, yet again, for the umpteenth time, angry Leftist bullies whose goal is to silence a free press (hello Media Matters) had launched yet another campaign to make advertisers think host X has so overstepped the bounds of politically correct speech that they must be stripped of their advertisers and removed from the airwaves. A handful of tech savvy people then launch a campaign to get the target to believe they are under massive attack. Four years ago, another target, Rush Limbaugh, had a team of his own examine how the game worked. As reported here at NewsBusters, Team Limbaugh reported this:

Only 10 Twitter users account for almost 70% of all StopRush tweets to advertisers, amplified by illicit software. In addition, almost every communication from a StopRush activist originates from outside the State of the advertiser. Thus, these activists are not and never would have been customers… their only role is to harass small businesses in an attempt to interfere with their operations, as long as they are advertising with Rush.

“A small number of politically motivated out-of-state activists are distributing target lists indiscriminately, and annoying small businesses until they give up the advertising deals that help them grow, or risk being unable to conduct business at all. It’s not even activism… it’s blackmail,” according to Brian Glicklich, Rush Limbaugh Show spokesperson.

How does this small group make themselves look so much bigger than they actually are? Stop Rush has deployed custom automated tweeting software, in violation of Twitter’s rules, that lets their activists send tweets at a rate far faster than any unassisted person could do manually. They send barrages of thousands of messages through this software until advertisers are bullied and harassed into cancellation.

And note well that Pacific Life’s senior leadership is acutely sensitive not to just selling insurance but in very much playing the political game. They have, but of course, a political action committee, specifically the Pacific Life Insurance Company Political Action Committee. A check with the Federal Election Commission illustrates vividly how far-Left the leadership of Pacific Life is taking the company.

In the last election cycle alone of 2017-2018, Pacific Life’s PAC has given beaucoup bucks to the following Democrats:

Oh, yes. The PAC has doled out to Republicans as well. This is how the game in Washington is played. Although it is worth noting that in key Senate races like those in Indiana, Missouri, and Florida there were zero dollars going to the Republican candidate. Now that the recognition dawns that they backed a number of Democrats who were Senate losers, you can be sure Pacific Life will seek out the winners to make financial amends.

The chairman, president and chief executive officer of Pacific Life is one James T. Morris. He has taken another route to support many of these and other Democrats by contributing to the American Council of Life Insurers Political Action Committee, which in turn gave its members big bucks to Pelosi, Hoyer, Nelson, McCaskill, and others.

Except, of course, Pacific Life isn’t just out there supporting candidates of their choice. By pulling their ads from Tucker Carlson’s show they are signaling that they agree with the far Left lynch mob that seeks to shut down vigorous debate and discussion of the issues. In this case, Pacific Life, in pulling their ads from the Carlson show has revealed that its primary focus is not selling insurance but in supporting Open Borders.

Here is the statement from Pacific Life on the Carlson show:

Pacific Life’s national advertising campaign runs on numerous networks and cable stations and on a variety of news, business and sports programs. One of our ads appeared on Tucker Carlson’s show last night following a segment where Mr. Carlson made a number of statements regarding immigration. As a company, we strongly disagree with Mr. Carlson’s statements. Our customer base and our workforce reflect the diversity of our great nation, something we take great pride in. We will not be advertising on Mr. Carlson’s show in the coming weeks as we reevaluate our relationship with his program.

Read again this line from the Pacific Life statement: “Our customer base and our workforce reflect the diversity of our great nation, something we take great pride in.”

This is said as if it is not an obvious fact that the entire population of the United States — 100% of the population — is composed of the descendants of immigrants. Pacific Life is laughably not some small island of “diversity” in a country that is not diverse. From Maine to Hawaii, America is nothing but an entire nation of diversity. To suggest otherwise is just, as said, laughably untrue. The President himself is the son and grandson of immigrants, the First Lady herself an immigrant.

Note also that, in typical Leftist style, Pacific Life proclaims its belief in “diversity” — but by its actions it boldly illustrates the company strongly opposes diversity of thought.

What Pacific Life is apparently supporting in its switch from insurance to politics are scenes like this one of illegals scaling border barriers, and stories like this one from the San Diego Union Tribune that headlines:

Migrants are scaling U.S.-Mexico fence. Will they be arrested?

Or this story from ABC News:

One can only wonder. In saying that “Pacific Life’s national advertising campaign runs on numerous networks and cable stations and on a variety of news, business and sports programs,” is it not now the time to make the fair demand of Pacific Life that they hold every network and cable station responsible for the content of each and every show and what is said on those shows?

Do they, for example, do any advertising on NBC and MSNBC? The latter is the home of Al Sharpton’s show Politics Nation. Do Pacific Life executives recall this is the same Al Sharpton who is on the record saying things like this: “If the Jews want to get it on, tell them to pin their yarmulkes back and come over to my house.”

How many migrants have been taken in for care and feeding by Pacific Life? Or perhaps closer to home, how many Pacific Life executives busily contributing to the idea of Open Borders while opposing a free press have locks on the doors of their office buildings not to mention their homes? What are they so afraid of? Who are they keeping out?

There is more, of course. There always is when a company like Pacific Life allows itself to be bullied into trying to silence the very diversity of thought it loftily claims to support — but doesn’t.

If you are of a mind to give Pacific Life executives a piece of your mind? Here’s who you can contact.

Here’s how to do it. This is the link to the Pacific Life contact page.

And in the meantime? Stand up for Tucker Carlson and a free press. Today it is Tucker. The next time it could be you.