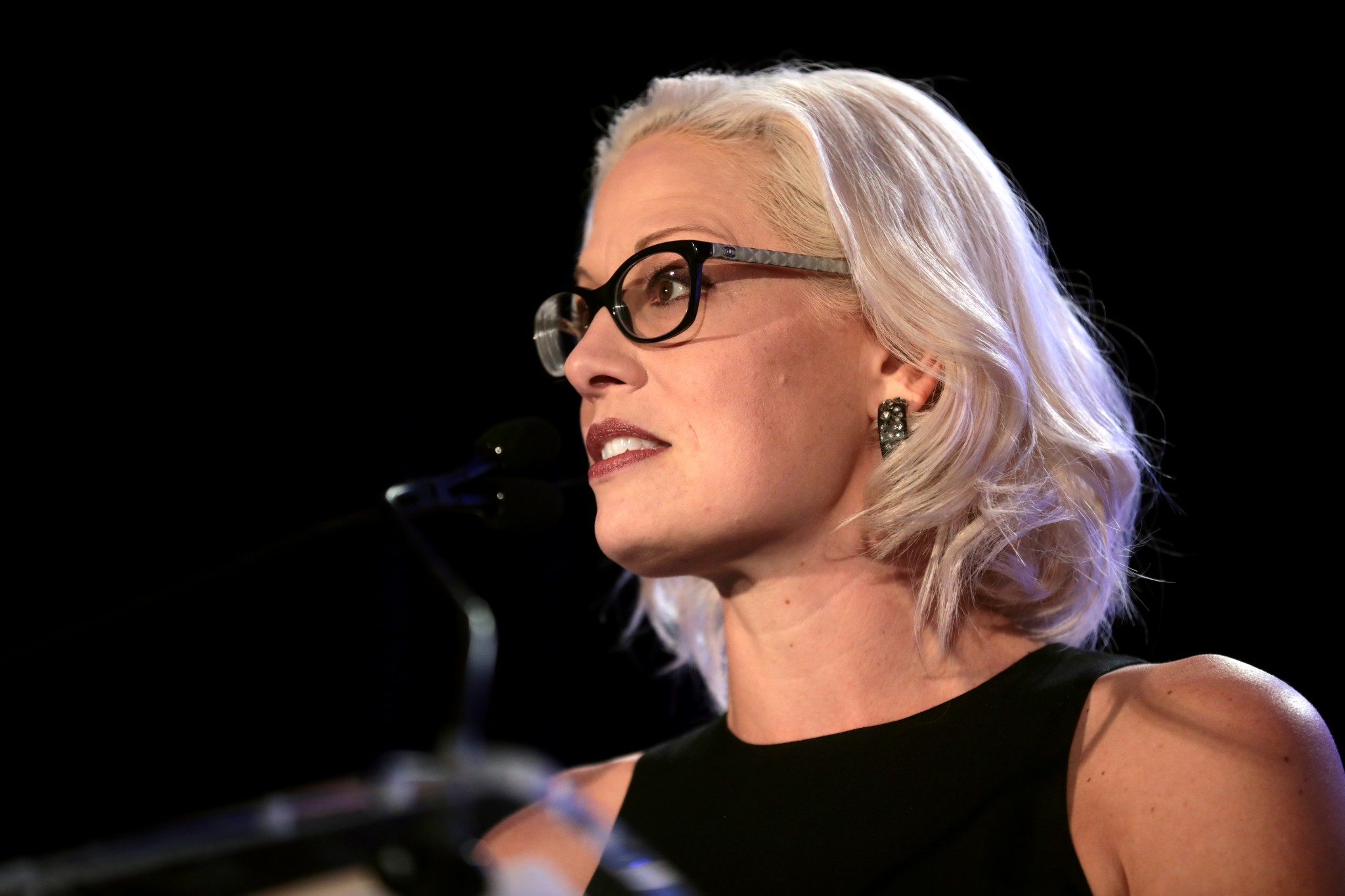 There is an expression in rabbinic literature: Mitzvah goreret Mitzvah; Aveirah goreret Aveirah. One who habitually does good deeds finds that opportunities arise in his or her life orbit to do even more good deeds. And one who sins with frequency finds that somehow more sins come his or her way.

With each new societal outrage, breakdown in our American core civilization, yet even newer and more obscene outrages arise. I see a direct line between Colin Kaepernick kneeling at the national anthem and the pigs who recently followed United States Sen. Kyrsten Sinema into a bathroom, shouting at her from the other side of her toilet stall. Brings back memories driving through the New York City community of Flushing, Queens.

I commence with a very carefully chosen word: pigs. That is a very strong word for someone like me to use. My readers know that I do not randomly hurl invectives at opponents. Criticisms? Yes. But epithets? No, that is not my style. For example, the only reason I call Bernie Sanders a “communist” and an “apostate” is that he is a communist and an apostate. If he were a juggler, I would call him a juggler. If he were a coal miner, I would call him that. It just so happens that he is a communist. And an apostate.

A person who cannot allow another human being the dignity of entering a toilet stall in private is a pig. Not because of politics but because of a basic fundamental lack of civilization. There are lines that are not crossed. Civilized humans do not cross them. Pigs do.

I have used this description once before for this form of micturition-intolerant behavior.  When I practiced high-stakes litigation at the nationally prominent law firm of Jones Day, they had a mid-level associate in the Los Angeles office who had some issues with common decency. The way it works in a major law firm of that caliber is that a partner often has a multi-million-dollar case matter and then “staffs up” a team, bringing in a senior- or mid-level associate, a lower-billing junior associate or two, and a paralegal. Sometimes, a lesser matter gets assigned initially to a senior associate or mid-level, who then “staffs up” with a junior associate. In the L.A. office, there was this mid-level associate for whom none of the junior associates wanted to work. He was not a particularly nice guy. His cases were not interesting. We knew he had no long-term future at the firm, so there was no point in trying to cultivate his friendship or impress him with our skills, particularly since he was not all that friendly anyway.

As he desperately would try to get one or another junior associate to work with him on one or another of his case matters, we all would avoid him respectfully. If he would phone us, we would see his “Caller ID” name on the screen and avoid it. If he would stop us in the hallway, we feared he was “staffing up,” so we would hasten by. He just could not get any of us to work with him. So he hit on a new strategy. Whenever he needed to draft a junior associate onto his matter, he would wait until he found himself at the men’s urinal standing alongside a junior associate who similarly was, shall we say, streaming a film by I. P. Dailey. . . .

Women reading this won’t fully intuit the fine points here, but most members of the male persuasion find that, once begun at such a ceramic sculpture of fine wall art, there is a period between 15 and 45 seconds that a male ain’t going anywhere else and will not turn his torso towards any other direction except straight ahead — unless he imagines he is a firefighter.

That’s when that guy would corral the First Year Associate he wanted to grab for his case:

DOV: Uh-huh. You don’t mean that Biblically, I hope.

PIG: No. I just need you to work with me on this very exciting case.

DOV: I would love to, but I am on overload.

PIG: This won’t take any time at all. Just three or four months. See you in my office in five minutes.

It is my long-standing position, especially when standing a long time in such a position, that anyone who abuses the urinal break to recruit litigation help is a pig. Maybe yer in, but I’m out.

And so it goes for those Woke Intersectionalists who followed Sen. Sinema to the toilet. Their behavior was and is disgusting. I watch that minute of YouTube video, and I hear my Mom of blessed memory saying: “Some people just never learned manners.”

The Left has evolved, particularly in the years since Obama broke down core aspects of our culture and civilization by empowering a Snowflake Generation to claim a life of Perpetual Entitlement to safe spaces, demanding trigger warnings of lurking microaggressions, with his trademark nose-in-the-air arrogance that anything goes for the Left. Maybe the problem even stems back to the very word: Entitlement, a word against which I have been crusading the past few days. Entitlement? No one is “entitled.” Not to welfare. Not to food stamps. Not to housing. Not to break into this country by flouting its borders and immigration laws.

Maybe the current degradation of our culture and civilization traces most directly to a snob who, because he could throw a football well, decided to kneel in front of 50,000 or more people while the national anthem of this country was being played. People have died for that song. That song is why that fellow is paid millions of dollars each year for the skill of throwing a football — and little else. He is paid millions more for endorsing a pair of sneakers. Anyone sane in such a position would kneel in such a stadium not to protest the “Star Spangled Banner” but literally to kneel with humility, genuflecting before the 50,000 people who despise him and his politics but are willing to pay to watch him throw a football while he still can. That song was written by a man in prison while a fateful battle ensued during a war when our White House was burned down, and the republic almost was lost to an empire that speaks English with a ridiculous accent  — and that, in those days, sought to impose tyranny on a freedom-loving and -living people.

Think of all the abuses against our very civilization to which we have grown accustomed since Obama and his ilk came to reign. Maxine Waters telling the troglodytes who respect her that they should get into the faces of their political opponents. People harassing Mitch McConnell and his wife at a diner. People driving Sarah Huckabee Sanders and her family out of a restaurant. People harassing Florida’s then-attorney-general Pam Bondi at a movie theater. People almost killing Sen. Rand Paul and his wife as they left a White House event. People pounding to break down the door of the U.S. Supreme Court, induced to madness by a manifestly perjurious witness aiming to destroy a good and devout Catholic man in front of his wife and daughters. These times have been very sad to experience and to watch. Conservative anger did not erupt ex nihilo.

The Mediacracy of Hypocrisy like to portray conservatives in bad lights. If 10,000 conservatives march, but one spits on the floor or fails to tie his shoes, that is the next day’s page-one photograph. Just think back to the Left Media race to judgment against Nick Sandmann, that sweet Catholic high school kid from Covington in northeastern Kentucky. But the reality is that conservatives are good people, very fine people. It is a core value of conservatism to live and let live. Yes, to advocate and to seek to persuade, but with an underlying laissez-faire recognition that reasonable people may — and should — differ because it is wrong to believe that one side should have the right to impose its beliefs in other people’s heads.

And, by the way, the vast majority of Americans on the other side of the aisle are good people, too. This is a good country comprised of wonderful people. We are not too humble, too arrogant, too tight-lipped, too loud. While the Mediacracy of Hypocrisy propagate the lie that we are Systemically Racist, people throughout the world of every race bang down our doors, pleading to enter. We give charity, food, and assistance to nations that hate us — maybe the right thing to do during earthquakes and ebola outbreaks, often foolish beyond words. We are such a good people.

Yet we do have our pigs. That’s all folks.