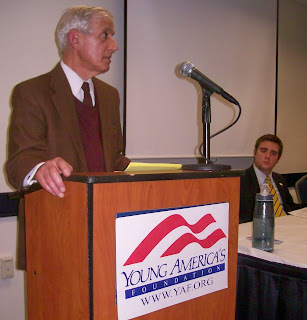 “Government stimulus programs have never worked and they’re not going to work now,” Lambro said in his presentation at the “Barack Obama: Epic Fail Teach-In” sponsored by the GWU chapter of Young America’s Foundation and the David Horowitz Freedom Center.

Environmentalists are attempting to use government power to create an artificial scarcity of energy in order to exercise control over citizens, Horner told students. 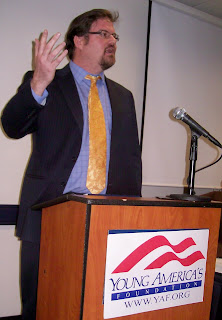 Goldberg, author of Liberal Fascism: The Secret History of the American Left, From Mussolini to the Politics of Change, addressed the Obama administration’s foreign policy.

Goldberg referred to a recent analysis by Walter Russell Mead that compared Obama’s policies to those of Jimmy Carter, and said that President Obama is “essentially isolationist” in his foreign policy, preferring to focus on his dometic agenda.

One of the biggest foreign-policy controversies of Obama’s presidency has been the effort to provide accused foreign terrorists like Khalid Sheik Mohammed with criminal trials in U.S. courts, Goldberg observed. That effort is about “empowering lawyers,” which is something Obama “truly believes in,” Goldberg said.

Asked about the administration’s refusal to support Great Britain in its dispute with Argentina over Falkland Islands oil rights, Goldberg said “Obama doesn’t like the British” — a resentment that some critics have suggested reflects the influence of the president’s Kenyan father and grandfather.

Robert Stacy McCain
Follow Their Stories:
View More
Robert Stacy McCain is the author of Sex Trouble: Essays on Radical Feminism and the War Against Human Nature. He blogs at TheOtherMcCain.com.
Most Popular
1
Dismal Science
The Biden Administration: Sophistry in Motion
by Frank Schell