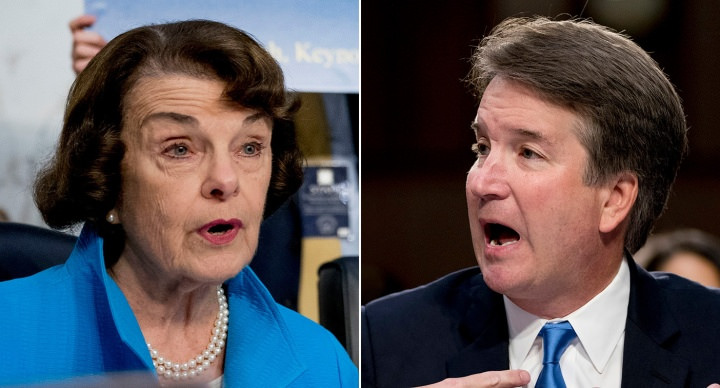 They probably hadn’t planned it this way.

A new poll suggests Republican voter enthusiasm has spiked amid the Kavanaugh confirmation fight, catching up with Democrats ahead of midterm elections. https://t.co/VPtdCplwf6 https://t.co/MfAvfNRBDC

When Dianne Feinstein originally decided to sit on the sham allegations against Judge Kavanaugh, she undoubtedly did so because she thought that the political would be timed perfectly. The media glare would make the GOP wilt like a flower on a 115 degree day in the desert and force Kavanaugh to withdraw. She could hardly be blamed, given the past behavior of her colleagues on the other side of the aisle..

This, however, is now Donald Trump’s Republican party, and it rolls around Washington with a little more swagger than immediately previous versions of itself.

Once Lindsey Graham unleashed his righteous scolding of the Democrats last Thursday a not-so-subtle shift could be almost immediately felt on the center-right to right-right on the political spectrum. Disparate entities in conservative and Republican politics were suddenly having a Kumbaya moment:

I have lived to see @stephenkruiser compliment Lindsey Graham.

The moment seems to be lasting thus far.

Just over a month away from critical elections across the country, the wide Democratic enthusiasm advantage that has defined the 2018 campaign up to this point has disappeared, according to a new NPR/PBS NewsHour/Marist poll.

In July, there was a 10-point gap between the number of Democrats and Republicans saying the November elections were “very important.” Now, that is down to 2 points, a statistical tie.

Yes, the Democrats have energized the base with this heinous stunt, it just happened to be the wrong base.

There were still plenty of us who were going to vote Republican in November because we worry about the Supreme Court. What Feinstein and the Democrats have done now, however, is begin pushing Never Trump Republicans who were basically checked out of the process into being heavily invested in making sure she doesn’t get away with this.

Anecdotally, every Never Trump person I’ve been in contact this past week has been what they’re calling “radicalized” by this.

Personally, while I was a solid vote, that was all. While watching the hearings last week I gave money to the party (NRSC and NRCC) for the first time in almost seven years. I’m now donating to some Senate campaigns as well. I had no plans to make any financial commitments this year until I saw that hideous charade last Thursday.

Unbelievably, the Democrats and their media mouthpieces are doubling down on their lunacy. I’m getting alerts on my phone about Kavanaugh’s high school yearbook. A week ago they were trying to say that he was a gang rapist. Now they just want to find evidence that he was an adolescent idiot at an age when we are all adolescent idiots.

Obviously, the end game here is to keep the pressure on until Lisa Murkowski, Susan Collins, or the execrable Jeff Flake buckle. That could still very well happen.

If they do, that may merely be the first part of the endgame. The second could come as an almost magically energized and suddenly united Republican and conservative electorate rolls over the Democrats planned blue wave.