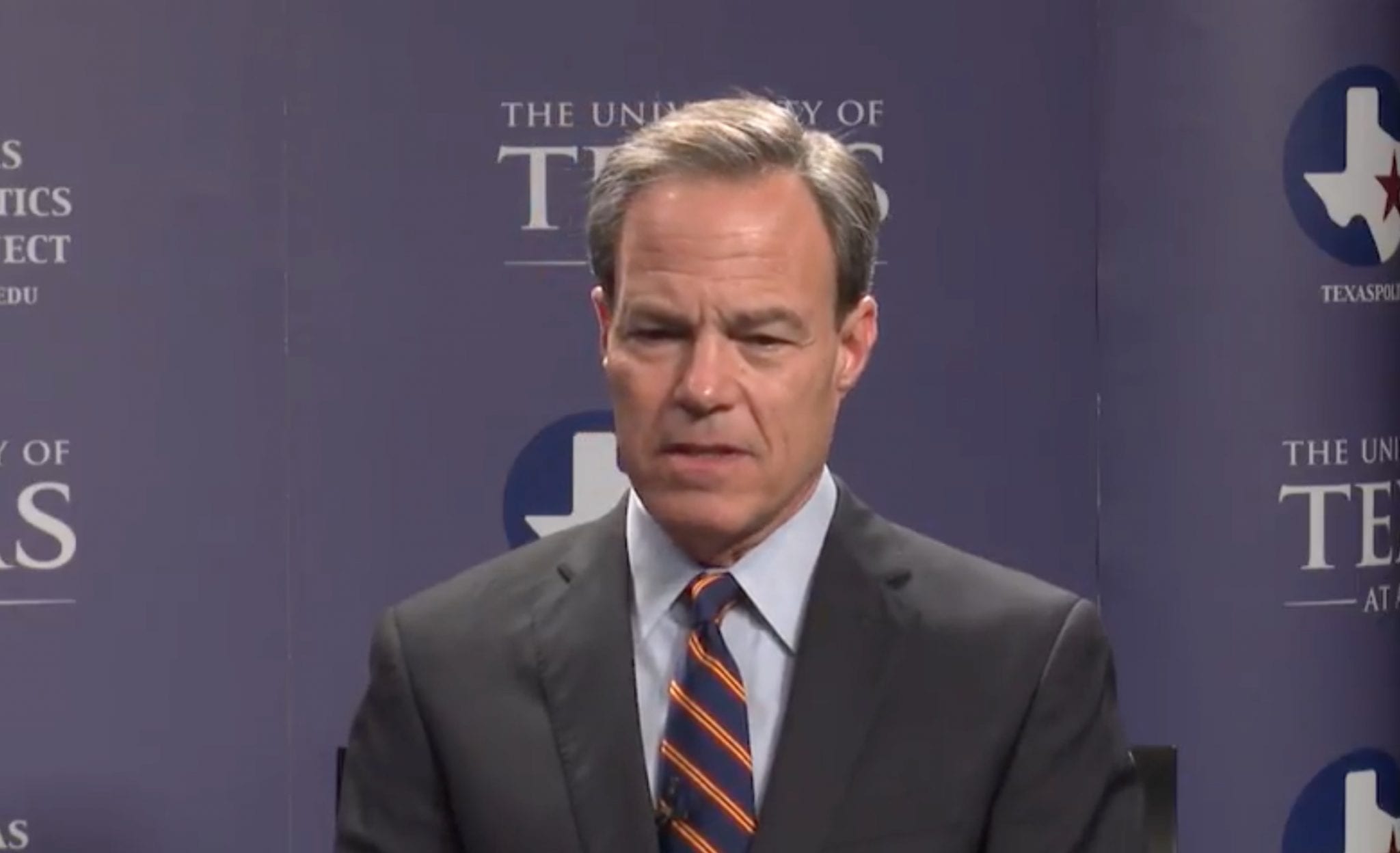 This is the third in a series of articles (the first two installments are here and here) dissecting the prosecution of Texas Attorney General Ken Paxton.

On November 4, 2014, when the 51-year-old Ken Paxton was triumphantly elected Attorney General of Texas, defeating his Democrat opponent, the euphoniously named Sam Houston, by over 20 percentage points, the conservative movement in the Lone Star State had a new rising star. Paxton’s enemies were worried; the Tea Party favorite, an impressive University of Virginia law school graduate, seemed bound for the Governor’s mansion, a prospect that made the state’s centrist GOP Establishment aghast. Paxton’s political career had been nothing short of meteoric. First elected to public office in 2002 with the support of grass-roots activists and evangelicals, Paxton represented his suburban Dallas district in the Texas House of Representatives for a decade before winning a coveted promotion to the exclusive 31-member Texas Senate in 2012.

Along the way, Paxton had shown little deference to the prevailing power structure in the Texas Legislature. In 2010, Paxton announced that he was challenging the incumbent House Speaker, moderate Joe Straus, in order “to honestly advance conservative principles and not simply protect the status quo.” Although — lacking enough support to win — Paxton ultimately pulled out before the vote, the attempted regicide was viewed by the powerful Speaker as an unpardonable perfidy.

Paxton compounded his threat to the GOP Establishment when he opposed the anointed favorite, Straus lieutenant and Texas House member Dan Branch, for the Republican nomination for AG in 2014. The high-visibility AG post, one of the most sought-after statewide offices, had long been held by Republican Greg Abbott, and was being vacated due to the retirement of Gov. Rick Perry, ending Perry’s record 14-year tenure and finally allowing Abbott to “move up” as governor after three terms as AG. (Another former Texas AG, GOP Majority Whip John Cornyn, previously used the office as a stepping stone to the U.S. Senate.)

The Establishment expected the moderate Branch, a Dallas resident with close ties to the Bush family, to run for AG unopposed, or at least to win the GOP nomination in a cake walk. This would make Branch the natural successor to Abbott as governor someday. Hence, Branch was the first Republican candidate for AG to declare his candidacy, and he quickly announced his endorsement by many key associates of Abbott and George W. Bush. Showing Straus’s powerful influence, a majority of the House Republican caucus also announced their endorsement of Branch. Moreover, Branch’s superior $4 million campaign bankroll was designed to discourage a serious primary challenge.

Paxton was undaunted. Due in part to the backing of U.S. Sen. Ted Cruz, Paxton foiled the Establishment’s plans by besting Branch in a three-way primary and then handily defeating him in a runoff, by a 64-36% margin. The GOP Establishment was embarrassed — and apoplectic.

So when a left-wing advocacy group, Texans for Public Justice [sic], lodged a frivolous criminal complaint against Paxton following the 2014 general election, relating to a years’-old paperwork violation that had already been administratively settled, the Establishment plotted its revenge. Paxton would be taken out through “lawfare” — the weaponized use of the criminal justice system — forcing him to resign or damaging him badly enough to make him a one-term AG. Branch would then be installed in Paxton’s place.

Despite their best efforts — which have been, and continue to be, formidable — Paxton’s enemies have failed. Paxton has performed as AG in an exemplary manner, distinguishing himself as one of the most effective state attorneys general in the country. Paxton has courageously withstood his enemies’ onslaught, maintaining his public support, raising a substantial campaign war chest, and deterring a Republican primary challenge for his re-election as AG in 2018.

The popular perception of Texas is that it is a conservative bastion, controlled — at least at the statewide level — by Republicans. That perception often obscures the more complicated underlying reality. When a conservative figure in Texas is targeted for a witch hunt at the hands of ostensibly Republican elected officials, outsiders sometimes have difficulty understanding the motivation. Alas, internecine political conflicts can be far more rancorous than partisan feuds. Given Texas’s shameful tradition of partisan feuds, that is no small claim.

Over the years, when the liberal Democrat serving as Travis County District Attorney (based in the People’s Republic of Austin) filed bogus criminal charges against Republican office-holders Kay Bailey Hutchison, Tom DeLay, and Rick Perry, observers were able to see through the legal mumbo-jumbo and recognize that the real motivation was partisan politics. Ditto the notorious “John Doe” investigation launched against Wisconsin Gov. Scott Walker. Ditto the Deep State’s ongoing campaign against President Donald Trump. The Left often resorts to lawfare to remove or discredit Republican opponents.

Partisan politics do not inspire all baseless prosecutions; sometimes overzealous prosecutors unfairly target politicians (such as the DOJ’s siege against Sen. Ted Stevens (R-AK) in 2008) for the same reason they went after the accounting firm Arthur Andersen LLP and the Duke University lacrosse team: the simple abuse of power. Obtaining a conviction (or extracting a guilty plea) from high-profile figures represents a prized trophy for an ambitious prosecutor seeking to achieve glory — or re-election. Blinded by the desire to “win,” ruthless prosecutors sometimes file excessive and even unwarranted charges, suppress exculpatory evidence, introduce perjured testimony, coerce guilty pleas, and threaten draconian sentences — all tools of the trade, as even Paxton’s prosecutors have acknowledged.

Unlike previous lawfare victims Hutchison, DeLay, and Perry, Paxton was not indicted by a Travis County grand jury. His witch hunt was commenced by nominal Republicans in conservative Collin County, a circumstance frequently cited by liberal journalists as “proof” that the case is not motivated by politics. This assertion displays a deep misunderstanding — or, more likely, a willful misrepresentation — of the political scene in Texas.

In Texas, voters form three blocs: Democrats (a minority statewide but representing perhaps 40% of the electorate), socially-conservative Republicans who tend to be religious and strongly pro-life, and “Establishment” Republicans who support the GOP’s economic agenda but are “moderate” on social issues such as abortion rights, the LGBT agenda, and so forth. In recent decades, the second and third camps have united in general elections to consistently elect Republicans to statewide offices. The GOP candidates tend to be (or at least claim to be) conservative in order to prevail in the Republican primary, which is dominated by the socially-conservative base.

Once legislators make it to the state capital in Austin, however, a different dynamic takes over. In the Texas House, for a decade Democrats and “Establishment” Republicans have joined forces to elect a “moderate” Speaker, Joe Straus, who uses the considerable power of that office to obstruct conservative policies favored by the state senate and Lt. Gov. Dan Patrick. With this “resistance,” Straus has earned the undying affection of the state’s centrist business interests and its liberal press corps. For working to stymie a highly publicized bill supported by Patrick and the state senate that would have prevented local governments from compelling transgender access to restrooms in government facilities, the liberal Dallas Morning News recently named Straus “Texan of the Year.”

Straus ruthlessly wields his power to defend the interests of his liberal-moderate coalition. A few years ago, when a member of the University of Texas Board of Regents (appointed by reform-minded Gov. Perry) threatened to expose a preferential admissions system at UT administered for the benefit of Straus’s cronies in the legislature, Straus directed a vicious campaign of retribution against regent Wallace Hall that was, in hindsight, a dress rehearsal for the Paxton inquisition. Tellingly, one of the alleged “victims” of Paxton’s alleged “securities fraud” — based on a made-up theory that was thrown out of federal court by an Obama appointee — is a key Straus lieutenant, Rep. Byron Cook (who, not surprisingly, backed Branch for AG).

The persecution of Paxton is a political hit job orchestrated by Team Straus — what the Wall Street Journal termed a “political prosecution.” The Journal declared that “the legal assault… looks like a trumped-up case intended to take down a politician who made himself unpopular with the grandees of the GOP establishment.”

Which brings us back to Paxton. Liberals loath him because he is a social conservative — a true-believing pro-life evangelical. The Texas press corps, being loaded with liberals, despises Paxton and his conservative policies, and has used the Establishment’s bogus prosecution as an excuse to pile on. Following Paxton’s groundless indictment, Erica Grieder, a senior editor at Texas Monthly, wrote that “the indictment isn’t the most troubling part of the story. What’s troubling is that Paxton was elected at all.” Reporters covering the case are more subtle about their anti-Paxton bias, but it is unmistakable. The Houston Chronicle snidely referred to Paxton as a “tea party darling.” Other media outlets have maligned him for his physical appearance, his “fundamentalist” religious beliefs (charging that he “wears his Christianity on his sleeve”), and even for maintaining his residence in McKinney, Texas.

President Trump has often accused the White House press corps of biased coverage — deriding their unhinged-sniping-masquerading-as-reporting as “fake news.” Sadly, the Austin-based Texas press corps is just as slanted, if not worse. One of the worst offenders is Lauren McGaughy at the Dallas Morning News. McGaughy, who formerly worked for the Houston Chronicle, does not try to conceal her left-wing political views. Her Twitter profile and Facebook page make clear that she is an LGBT advocate, with a particular interest in the rights of transgender prison inmates, a focus that carries over to her reporting at the DMN. Many reporters, of course, harbor liberal attitudes, which is unobjectionable unless their political views affect their journalistic objectivity. Which they plainly do.

In their coverage of the criminal proceedings involving Ken Paxton, the Texas press corps has assumed the role of PR flacks for the prosecution, uncritically promoting the special prosecutors’ arguments and failing to provide a balanced presentation of the facts. It is clear that the liberal press is rooting for the prosecution, doing everything it can do to diminish Paxton’s prospects for a fair resolution of the pending charges. The media has a heavy thumb on the scales of justice, seeking to avoid conservative hegemony in Texas politics by preserving the increasingly tenuous “Establishment” status quo.

In the next installment, I will review the relationship between Paxton’s special prosecutors and the press corps, revealing substantial amounts of leaking and collusion, in violation of the media gag order imposed by the trial court.